State of the Angus Business 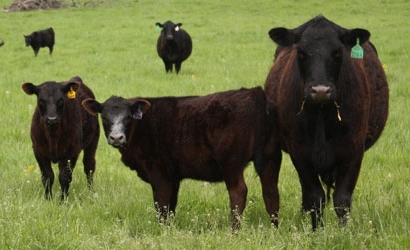 There’s never been a better time to be in the Angus business, according to the latest data from the American Angus Association. Despite historically low cow-herd inventories, business has grown for Angus breeders and the member-driven organization reports growth in nearly every category in fiscal year 2014.

From registrations to sales data to cattle qualifying for the Certified Angus Beef brand, numbers are up and signal positive news for the business breed.

“An intentional focus on quality has become apparent in the cattle market this year,” says Bryce Schumann, Association chief executive officer. “Whether it’s cattlemen looking to rebuild herds or a consumer purchasing beef for their dinner table, quality reigns supreme, and the Angus breed delivers on that expectation.”

Angus seedstock sales reported to the Association from Oct. 1, 2013, to Sept. 30, 2014, show the breed exceeded $326 million in sales – a first in Association history. Collectively, Angus breeders across the country earned $61.5 million more than the prior fiscal year – a 23% increase in total dollars spent on registered Angus seedstock.

During the past year, the average registered Angus sale generated twice as much income as it did in 2010, or nearly $250,000 more than it did four years ago. That’s added revenue that goes back to rural communities and families across the nation, Schumann says.

The Association also reports a positive bottom-line throughout the organization and its entities, with total assets of nearly $47 million.

“Adopting new technology and attention to continuously improving selection decisions have driven the value for Angus during the past year,” Schumann says. “That was extremely evident in our bull sale averages – we are selling more bulls at higher prices, sustaining increased demand for registered Angus bulls.”

Proof that more Angus breeders are incorporating technology into their herds is that more than 53% of calves recorded in fiscal year 2014 were produced by artificial insemination (AI), the second-largest figure ever for the Association; and 10% of registrations were calves produced via embryo transfer.

With each new registration, the Association’s database gains momentum. In fiscal year 2014, the industry-leading performance database grew by more than 17,000 weaning weights from 700 additional herds. Carcass records reported to the Association also increased by 165% – pointing toward member interest in one of the breed’s most economically important traits.

Fiscal year 2014 saw a 400,000-head decline in the number of Angus-influenced cattle available at the brand’s 30 licensed packing plants across North America. But a greater share of those featured Angus influence and a record proportion met the 10 CAB carcass specifications, resulting in a net gain of more than 80,000 additional cattle accepted.

Angus seedstock breeders are not the only ones jumping on board with genomics. During the past year, the number of GeneMax tests for commercial heifer selection increased by 36%.

“We remain focused on the technologies that provide a higher quality product for the consumer. That is the fuel to our success,” Schumann says. “If we can get more pounds of high quality CAB product sold, those benefits cycle right back to our members and commercial partners who invest in registered Angus genetics.”

The breed’s ability to market and engage its membership and the entire cattle industry also made great strides in fiscal year 2014. The newly aligned Angus Productions Inc. (API), which unified all of the Association’s communications platforms, including print, radio, TV and digital, saw an increase in audience engagement.

Angus Journal celebrated its 35th anniversary, and remains the flagship communications vehicle for the Association with more breeder advertising and timely news and information than any publication in the industry. API’s weekly TV show, The Angus Report, set records for ratings, according to Nielsen – nearly tripling its per-viewing audience since the program launched on RFD-TV in 2011.

The people who comprise the Angus community also remain dedicated to growing its future. More than $254,000 was awarded to Angus youth in scholarships through the Angus Foundation, and the Association’s non-profit organization reported increasing revenues in fiscal year 2014 toward its initiatives in youth, education and research to advance the breed.

“Together, we achieved much success in the last 12 months,” Schumann says. “I’m proud to be a part of this great breed and proud of the commitment shown by our members and the staff of the Association and each of its entities. This organization and this breed are made up of some of the best, hardest-working people in this business — and it shows in the many well-deserved successes achieved this year.”