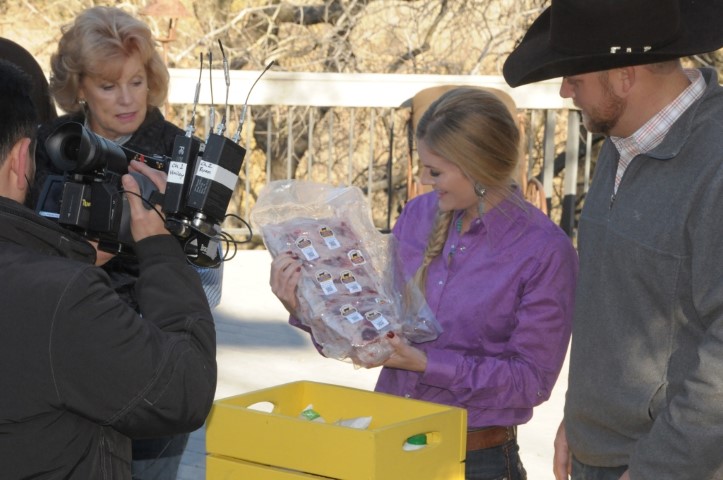 When change and uncertainty are everywhere, that which remains the same stands out. Perhaps that’s why, with the highest beef prices the world has ever seen, the 17,000 Certified Angus Beef ® (CAB®) brand partners in 47 countries celebrated eight straight years of record sales and the tenth consecutive year of growth.

Fiscal 2014, which ended September 30, saw a 400,000-head decline in the number of Angus-influenced cattle available at the brand’s 30 licensed packing plants across North America. But a greater share of those featured Angus influence and a record proportion met the 10 CAB carcass specifications, resulting in a net gain of more than 80,000 additional cattle accepted. 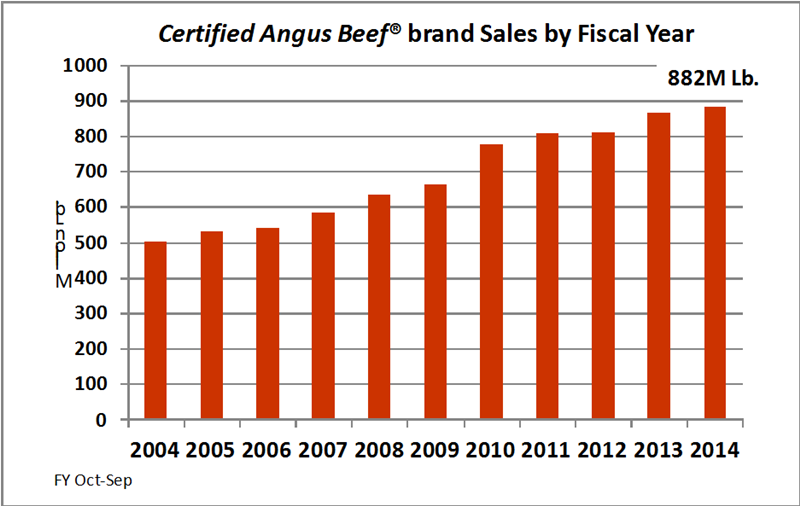 Consumer sales could be seen as 4.7 billion three-ounce servings that injected $6.8 billion into the beef industry in the last year.

“Without a doubt the brand is defined in part by the quality of the product – but it is impactful because of people and relationships that connect each and every one of us,” CAB President John Stika said.

Six of the brand’s 10 best sales months in its 36-year history were in Fiscal 2014, exceeding 70 million pounds in nine of those months. Sales were especially strong through the summer, when partners promoted the brand as a focal point of grilling season. August was only the second time since 1978 that monthly brand sales exceeded 80 million pounds.”

Fewer but better
Angus cattle have never been worth more money than they are now. Working with a tighter supply, CAB’s market share has rapidly expanded, comprising nearly 15% of all fed cattle harvested through licensed packers that harvest 85% of the total supply.

Boxed beef cutout values for the brand moved up 55% in the past five years, even as consumers purchased more each year. Similarly, many Angus breeders have been able to sell more and better bulls at higher prices. 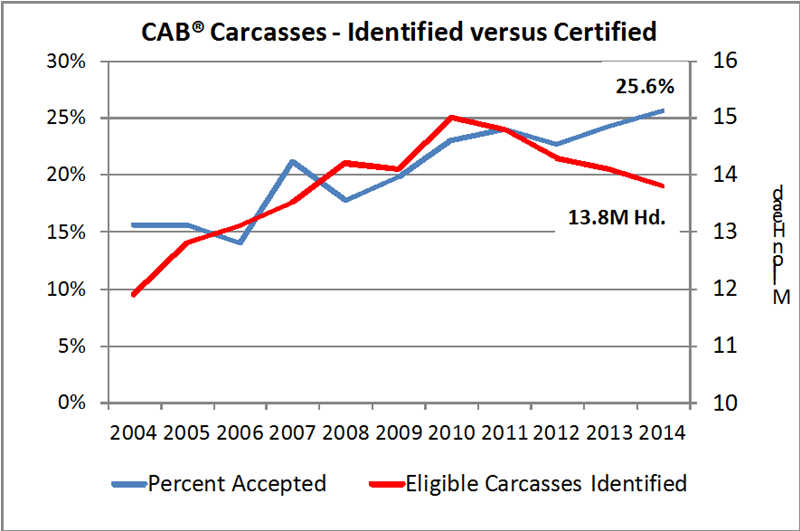 Focused genetics and coordinated management paired with a slight increase (.8%) in the percentage of Angus-type cattle led to a record overall acceptance rate of 25.6%, up from last year’s record of 24.2%. Ten years ago the acceptance rate was 15.6%.

This year, those acceptance rates hit a record weekly high of 29.5% and exceeded 27% during 12 weeks. Packers certified an average of 67,800 carcasses each week this year, totaling 3.52 million for the year.

“Overall fed cattle numbers are down, but between the growth of Angus influence and the improvement in grade, we continue to grow acceptance rates and hold our own with availability of CAB carcasses,” said Mark McCully, vice president of production

Not only did consumers pay more to enjoy more of the brand around the world last year, but they also demanded significantly more CAB brand Prime. Those sales reached a record 11.9 million pounds, up 29.3% in just one year for the brand extension that has been on the market since 1999.

“This is a very creative industry,” Stika said. “It’s not just through technology. It’s about focus, it’s about discipline, it’s being intentional with the choices and decisions we make in the breeding and management of our cattle.”

A shared vision
Stika said look no further than the people behind this brand to explain current success. The hundreds of thousands who work within those 17,000 licensed partners or work to produce the best calves on the ranch, all share the common goal of providing quality beef to the consumer.

CAB’s Foodservice Division achieved the most in growth, exceeding 300 million pounds for the first time with an increase of 9.4% over last year. While Retail sales saw a slight decline of 4.5%, International growth continued its steady rise with 121 million pounds sold, a 9.1% increase. Canada, Mexico and Japan were the largest markets.

The summer season brought with it demand for ground beef and ribeye steaks, while bone-in ribs took their turn during the holiday months. With domestic foodservice distributors leading the charge, middle meats sales grew, setting the stage for growth in end meats, ground beef, and CAB Prime and Natural extensions as well.

Action with intention
Value, loyalty and trust in the brand are as high as they’ve ever been, Stika said, noting the brand aligns passions and ultimately connects people to people. “None of us are in this by ourselves,” he said.

Since its establishment in February 2012, the CAB Education & Culinary Center (ECC) has served as a unique gathering place for partners in and outside of the beef industry to gain insight into the brand and the quality beef that defines it. From cattlemen to media guests and scientists to chefs, more than 175 groups have visited the Wooster, Ohio, venue from all parts of the world.

Recent educational endeavors include CAB Meat Labs, a fun way for foodservice distributors’ sales teams to learn the details about the brand and how to market it. With longtime partner Smashburger, August found CAB featured in a national commercial on NBC.

Recipe Rehab, an award-winning cooking show on CBS, featured Chef Keoni Chang of Hawaii’s Foodland Super Market and CAB Brand Ambassador, along with the Nelson family of Five Star Land & Livestock, Wilton, Calif. Viewers saw the product quality and versatility and learned the ranching story through the eyes of a fourth-generation Angus family.

A future bright
Since 2009, demand for the brand has increased by 78.7% according to a Kansas State University study. Those who purchase registered Angus bulls for their commercial herds are like consumers who insist on CAB for their family and friends. Together, they see the price-value advantage that has always come through, one that ensures loyalty to cattle and the brand. Together, they strive toward the best and together they celebrate that achievement.

Learn more about the brand at www.certifiedangusbeef.com, or access producer resources at www.cabpartners.com.