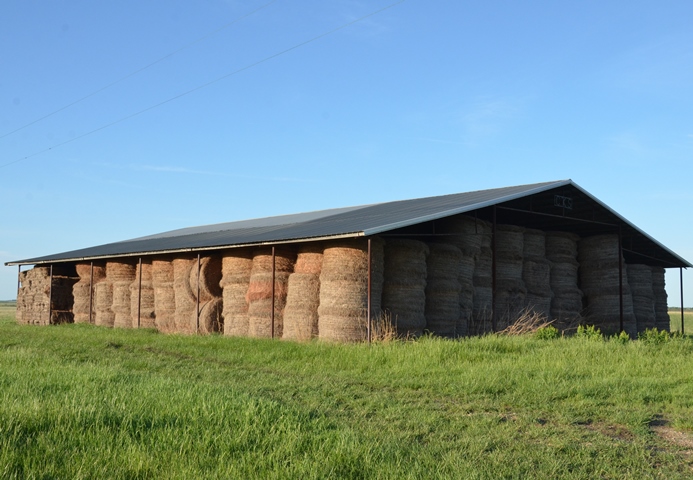 By: Travis Meeter, University of Illinois

Hay is made to feed livestock in periods of forage dormancy. Many times hay is packaged in the form of a big round bale. This method of harvest is preferred by many farmers because of low labor needs and little need for facilities or infrastructure to feed the hay. One of the largest downfalls to hay in the round bale form is the weathering that occurs when the bales are stored outside.

The round shape of the bale results in a large surface area on the outside of the bale for weathering to occur. The figure below illustrates that 1/3 of the entire bale resides in the outer 6" of a 5.5 foot bale.

Storing hay inside a well ventilated barn will result in the least amount of loss. Humid regions, like Illinois, are good candidates for inside bale storage. Humid areas are also prone to bales being too wet at time of harvest. Bales too high in moisture can heat and catch fire. Thus, tightly packing bales into a barn can end with the loss of the shed if a bale catches fire. 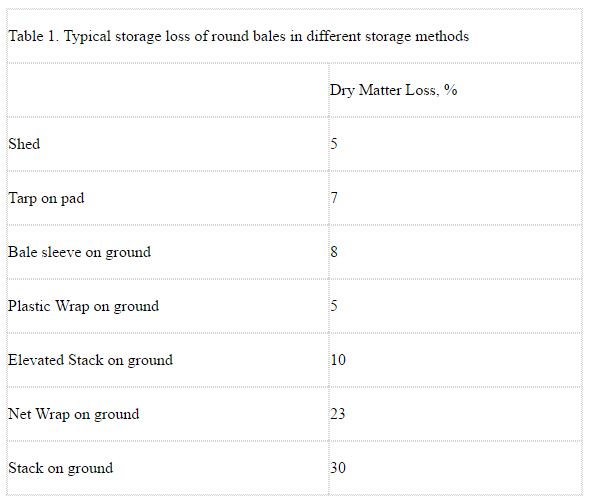 Outside storage of round bales can result in substantial losses of nutrient value and palatability of the hay. In turn, this leads to more shrink during storage and waste during feeding. Deterioration and feeding losses will greatly increase the cost of hay. Costs of increasing waste percentages are illustrated in table 2. 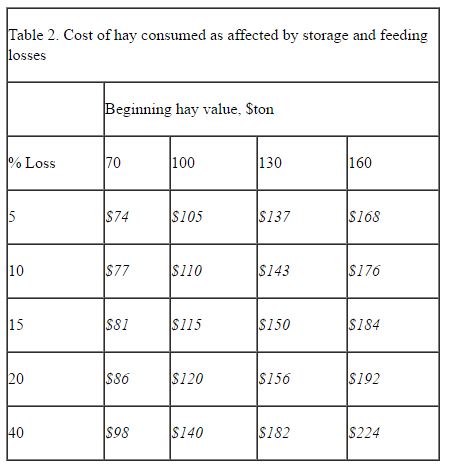 When storing bales outside, several factors will influence the amount of storage loss that occurs. Among the factors you will want to be mindful of are:

Bale Density – Tighter, more dense bales will be less permeable to water infiltration
Annual Rainfall- Areas with more rainfall will be at greater risk for losses
Storage site – A well-drained site where danger of fire is limited. Do not store bales under trees or in areas where moisture is harbored.
Bale Orientation – Avoid bales touching on the sides or rounded portions, flat ends should be firmly butted together, Run rows of bales north to south to increase sunlight exposure,

Storing hay can be improved several ways. If you do plan to store hay inside, invest in a hay moisture probe that will help you determine if hay if fit to pack into a barn with little risk of fire. If you plan to store hay outside, improve the drainage of the area. Run bale rows up and down a sloping area. You can stack bales on pallets or railroad ties. You may look into a layer of coarse rock that will keep bale to soil contact at a minimum. Make sure bales are not touching and avoid stacking bales outside without tarping. Tarps are a lower cost investment than sheds. If tarps are secured properly and the bottom of the bale is kept dry, expect big improvements in bale storage. Keeping moisture off and away from bales will help reduce hay storage losses.