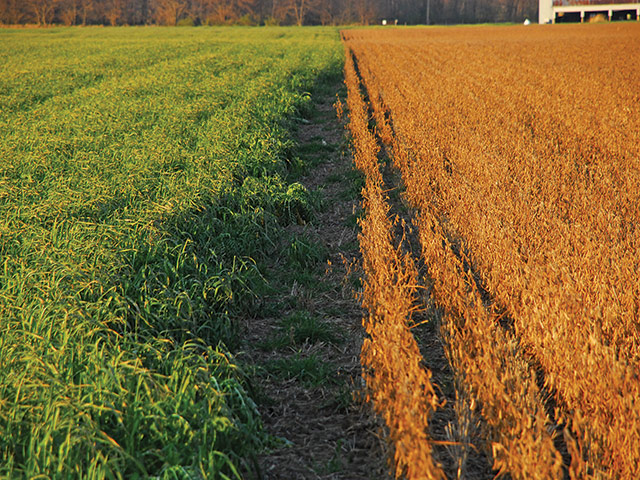 Cover crops have quickly evolved into another aspect of precision farming, as farmers search for the ideal mixture for each soil and rotation. Does it really matter which one you choose? Early results from a field-scale study, conducted by Farm Journal Field Agronomist Ken Ferrie, suggest it does.

Although it will take years to document the full impact of cover crops on soil health, the first year’s results are exciting because they reveal improvements in nutrient availability and infiltration. They also show the effects vary for different cover crop mixtures.

The study is being conducted on a 68-acre field of Crane loam and Wea loam in central Illinois, where the farmers routinely double-crop soybeans after wheat. Following the 2014 wheat harvest, Ferrie and the farmers compared four treatments in strips all the way across the field.

In November 2014, the farmer ran a strip-till bar through the entire field. In spring 2015, he freshened the strips and then planted corn into them.

Ferrie started taking soil tests in December 2014 to see if the cover crops were changing the availability of nutrients. Although the differences were small at that point, the answer was yes. In the double-crop soybean area, the ortho phosphate (water-soluble phosphorus readily available to plants) reading was 1.9 ppm. In the radish/annual ryegrass/turnip area, it was 1.4 ppm. In the radish/crimson clover/turnip strip, it was 3.0 ppm, and in the oats/radish area, it was 4.0 ppm.

“The soil in the radish/annual ryegrass/turnip plot might have contained fewer nutrients because the ryegrass was still actively growing,” Ferrie says. “It might have been continuing to take up nutrients and store them in the plants. Freezing temperatures had killed the other cover crop mixtures up to a month earlier.”

Nitrogen tests in late May, when the corn plants had five to six leaves (V5 to V6 growth stage), showed significant differences between the cover crop mixtures. All the plots received the same amount of applied nitrogen for the corn crop, Ferrie notes. So, in the absence of cover crops, nitrogen readings should have been the same.

All the plots had 8 ppm ammonium nitrogen in the top 24". But with nitrate-nitrogen, the oats/radish mix had 166 lb. per acre; the double-crop soybeans had 184 lb. the radish/annual ryegrass/turnip mix had 191 lb.; and the radish/crimson clover/turnip mix had 216 lb.

“The 32-lb. per acre increase in nitrate-nitrogen between double-crop soybeans (with no cover crop) and the radish/crimson clover/turnip mix showed the effect of the crimson clover,” Ferrie says. “That mixture was designed to provide nitrogen for the following corn crop.

“In May, when we took nitrate tests, the crimson clover was beginning to release the nitrogen in its residue. The oats/radish mix had the lowest nitrate value because freezing killed those plants in November or December, and they lost their ability to pull up nitrogen from deep in the soil. The annual ryegrass was still alive at that point since we didn’t kill it until April, so it might have still been taking up nutrients from the soil and storing them in the plants,” he adds.

Double-crop soybeans produced more nitrate-nitrogen than the oats/radish cover because, as a legume, the soybean residue contained more nitrogen. While soybeans make their own nitrogen, oats and radishes have to pick up their nitrogen from the soil before they freeze.

Interestingly, the radish/annual ryegrass/turnip mix contained more nitrate-nitrogen than the oats/radish
mix and the double-crop soybean residue. “I suspect the annual ryegrass kept growing through the winter and early spring, giving it more opportunity to pull up nitrogen from deep in the soil,” Ferrie says.

The yield range: 259.5 bu. per acre behind the radish/crimson clover/turnip cover crop; 254 bu. following the radish/annual ryegrass/turnip mix; 252.5 bu. after the oats/radish mix; and 252 following double-crop soybeans. “That’s not much separation in yield; but it looks like the extra nitrogen in the crimson clover and annual ryegrass mixes bumped yield 2 bu. to 7½ bu. per acre,” Ferrie says.

On Oct. 29, following corn harvest, another laboratory analysis showed soil after double-crop soybeans was lower in available nutrients than soil that had been cover-cropped. “This shows the cover crops were able to pull out and recycle nutrients from the soil,” Ferrie says. “In contrast, nutrients were removed in the harvested soybeans and not returned. Another way to view the results is we can increase corn yield by 7 bu. per acre by choosing the right cover crop mix.”

Only the oats/radish mixture rated fair, rather than poor, on the test scale. (It takes 5 billion microbes to rank excellent.) “But we see a correlation between the fewest soil microbes and the fewest available nutrients,” Ferrie says. “The double-crop soybean area ranked lowest in both, showing the cover crops had an impact.”

“We’re not sure why the oats/radish mixture had the highest microbe population and infiltration rate,” Ferrie says. “It might be because there were more oat plants than annual ryegrass plants (based on the recommended seeding rate for both mixtures). The area following wheat might have had a lower infiltration rate if soybeans had not been double-cropped—the soybeans functioned as a cover crop until they were harvested in October.”

In light of the positive results, don’t neglect to analyze return on investment. (See “Cover Crop Cost and Return” below.)

“Improving soil health is a long-term project, maybe a lifetime quest,” Ferrie says. “It falls under stewardship and may have to be measured in terms other than net profit.”