These basic factors come into play as you adjust planting date and other management practices.
( Darrell Smith )

From the coffee shop to the elevator, the talk these days is about high soybean yields. And for good reason: “We are seeing higher yields in fields where we have never seen them before,” says Farm Journal Field Agronomist Ken Ferrie. “They are not coming from every field, but overall farm yields have bumped upward.”

Some of the reasons for higher soybean yields, Ferrie says, include climate change, technology, earlier planting and plant genetics.

Grant Noland has noticed the trend toward higher soybean yields on his Blue Mound, Ill., farm. “In the past four years, we have taken a much more in-depth approach to soybean production, and our farm’s yields have continued to rise,” he says.

New practices must make sense economically, Noland points out: “Higher yields are important, but we remain focused on revenue.”

Because many aspects of management might change as you transition into high-yield soybean production, some basic knowledge about soybean culture is required.

The way soybeans grow and develop is a function of each variety’s response to its environment. If you change the environment, by planting earlier for example, you will change the way the plant develops.

“What places a soybean in a maturity group is when it initiates the reproductive stage,” Ferrie explains. “This is triggered by night length. There’s quite a difference in night length from Minnesota to Florida, so we need maturities for each zone.”

Soybean plants have an internal clock that tells them when to begin flowering. The plant’s time-keeping system is triggered by sunlight and darkness, which causes the phytochrome protein in the leaves to switch from active to inactive status.

“This is true for both indeterminate and determinate soybeans. The level of protein that has to convert from active to inactive varies by maturity group,” he adds.

For 10 days after germination, food stored in the cotyledons feeds the plant. Then photosynthesis takes over. Unlike corn, the growing point is above ground, so the plant starts responding to air temperature shortly after emergence. But the cotyledons usually don’t supply nitrogen until the V3 or V4 stage.

Two node stages prior to R1, axillary buds in the top of the stem develop a flower cluster called the raceme. Pods develop from the bottom of the raceme first.

From that point, the reproductive process begins:

“In indeterminate varieties, this begins at the third through sixth node from the top growing point,” Ferrie says, “but only if the night is long enough to trigger flowering.”

At R5, seeds of the upper four nodes will be about ⅛" in size. “At R5, an indeterminate plant has attained maximum height, node number and leaf area index,” Ferrie says. “Nitrogen fixation drops off rapidly and seed development enters a rapid pace. At R5.5 the nutrients stored throughout the plant start to translocate to the pod.

At R6, green soybeans fill the pod cavity at one of the uppermost nodes, and root growth stops.

At R7, the pod reaches a mature color, and the seed is 60% moisture but physically mature.

Branching is a function of environment and genetics. “The main growing point on top of the plant controls axillary buds on the stems below,” Ferrie says. “If the main growing point exerts a lot of control, you get a straight-line bean. If it has weak control, you get a bushy bean. When sunlight hits the lower leaves, it puts on pressure to branch. When the rows close, branching slows. Wider rows and lower densities trigger more branching.

“All soybeans will branch when planted in low densities,” Ferrie says. “But bushy varieties do it faster and have more branches than straight-line varieties. In a typical growing season new growth stages appear every five days from emergence to V5 and every three days from V5 up to R5.”

Soybean yield has three components: total number of pods per acre, number of beans per pod and weight per bean.

“Although beans per pod and bean size can make a significance in yield, the maximum limit for both is genetically determined,” Ferrie says. “So large yield increases result from more pods per acre,” Ferrie says. 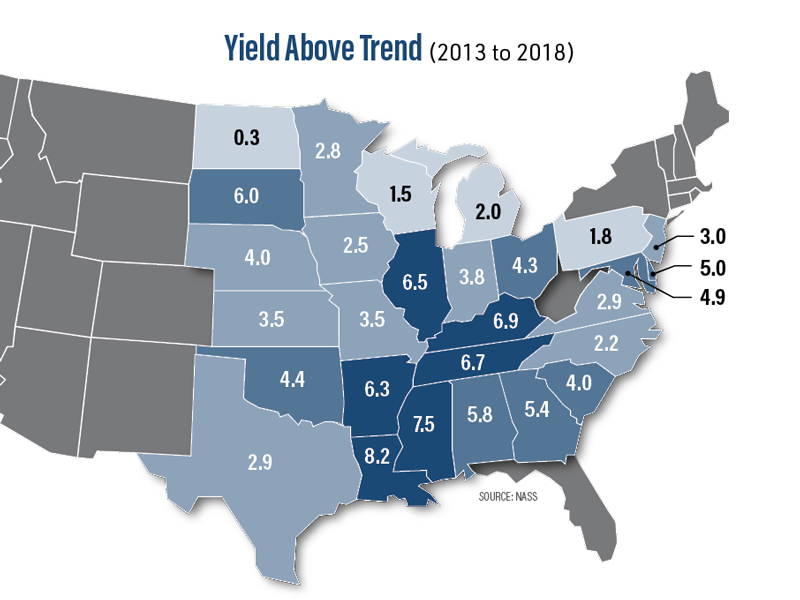 Soybean yields have been above trend every year by an average of 3.7 bu. per acre. To read ag economist Gary Schnitkey’s analysis of yield trends in various states, go to AgWeb.com/soybean-growth.

High-Yield Soybeans Series
Adjusting practices to grow higher soybean yields isn’t simple. There are technology and management practices to master. To help you put everything together, visit www.AgWeb.com/high-yield-soybeans