Tar Spot: What You Need to Know About This New Corn Disease 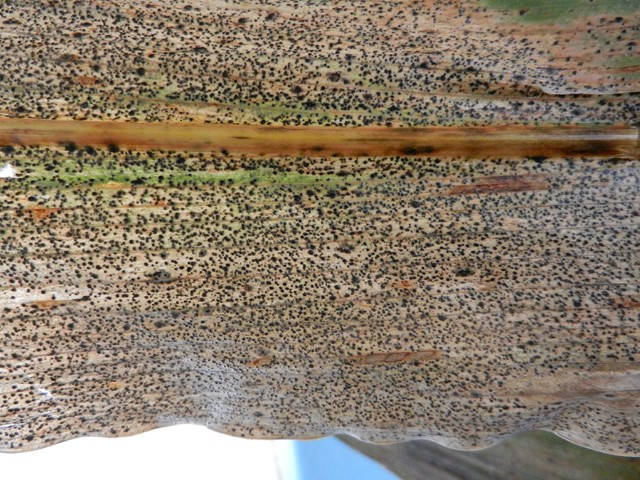 The discovery of tar spot, a new corn disease never seen before in the Midwest, has many farmers worried about the threat of lower yields, rejected corn, and higher management costs.

For those growers who find themselves on edge, Kiersten Wise, Extension field crop disease specialist and associate professor of plant pathology at Purdue, has some information that might be helpful. Wise helped discover tar spot in Indiana.

Here's what you need to know.

1. Weather was likely a factor in tar spot's arrival in the Corn Belt. “Humid, cool weather, typically the highlands of Mexico, is where you can find the disease Wise says. “While we don’t know for sure how the fungus that causes tar spot arrived in the Midwest, inoculum may have been transported by a tropical storm, and we just happened to have the cool, humid conditions that favored disease development in our area.”

Wise had never seen tar spot before and took time to make sure they had the correct diagnosis before reporting their findings. “A crop consultant submitted samples to the Purdue Plant and Pest Diagnostic Lab where we looked at the sample and realized what we were seeing was not a common disease in Indiana,” Wise says. “Once we realized it may be tar spot, we sent it to USDA's APHIS facility in Beltsville, Md., for confirmation.”

2. Look for lesions on your plants. When you’re scouting, keep an eye out for small yellow to brown lesions on the leaves and husks of the plant ,with raised round  black structures in the lesions. Although these black structures can cover much of the leaves and husks, there is no information yet on if yield loss will occur in the U.S. due to the disease. “It’s important to be aware of tar spot,” Wise says. “So far we have confirmed the disease in at least three counties in Indiana and three in Illinois.” If you see these symptoms--or others that you don’t recognize--in your corn, send a sample to your local Extension diagnostic lab for testing.

3. Keep alert, but don't panic, about tar spot. U.S. farmers have two advantages against this disease, according to Wise. First, only the less harmful fungus associated with tar spot has been identified  in the Midwest to date. Second, this fungus doesn’t survive well on dead plant material, and since it is used to warmer climates, its chances of survival may be slimmer in your typical long, cold Midwest winter. Regardless of threat level, be sure to keep an eye out for symptoms.

“It’s a new disease, nothing to panic about, but we need to learn what we can and determine what, if any, potential future impact the disease may have in the U.S.,” Wise says. “Knowing what you have is the best defense.”

Have you seen tar spot in your area? Let us know in the comments.