How to Reduce Scouting Time By 60%

There are several potential benefits to using unmanned aerial vehicles, or drones, in agriculture. Landmark Services Cooperative (LSC) says one of the most compelling reasons to use them is simple efficiency. LSC agronomists say drones can reduce scouting time by as much as 60%.

LSC added a small forward-propelled helicopter with a built-in camera to its toolbox at the beginning of the 2013 crop season. Using a tablet, the company’s agronomists can remotely fly the machines above the field to collect 360° views for quick detection of nutrient deficiencies or diseases.

"Whenever you see a field from a different perspective, you’re able to pick up new information," says Dan Moehn, vice president of LSC’s agronomy division. "If you’re standing at the end of a corn field, you have one perspective, but when you get in the air, you can see a much larger view of the field and can quickly spot areas that need attention."

Moehn says once the imagery is collected, it can be evaluated for signs of disease pressure, nutrient deficiencies or insect feeding. Typically, dark green plants are healthiest, and areas of yellowing in the field are areas that can be flagged for further investigation. Often times, quicker identification with follow-up tissue sampling can lead to smart in-season input decisions, Moehn says.

"The more scouting we can do, the more probable it is that we’ll see problems before they become bigger than they need to be," he says. "Preventing problems in the field is especially beneficial in a market where every bushel counts."

Welcome to the Silicon Prairie

You’ve probably heard of Silicon Valley, but what and where is the Silicon Prairie? The term has been used to describe various tech innovation hot spots in the Midwest and High Plains.

Iowans are claiming the latest bragging rights for the Silicon Prairie crown—five of the 21 people that Broadband for America recently named "Faces of Innovation" hail from Iowa, including sixth-generation farmer Grant Kimberley. Farmers are among the benefactors of the influx of tech startups into the rural Midwest.

"Iowa is certainly an innovative state and also the breadbasket of the country," Kimberley says. "So the moniker of ‘Silicon Prairie’ does fit very well."

He says broadband has really changed his business in the past 15 years through the continued advances in GPS and other precision ag technologies and through tapping into smartphone apps and other technologies.

Indiana’s Michele Payn-Knoper, a leading agriculture advocate who founded Cause Matters in 2001, also made the Faces of Innovation list. For a complete lineup, visit http://facesofinnovation.org.

The Farm Journal Pulse polls farmers and ranchers for their straight-from-the-farm opinions and crop progress updates. A poll this summer asked, "What forms of precision ag technology do you use?" More than 1,700 farmers responded, showing that farmers are more tech-savvy than ever. About two-thirds of respondents say they use at least two of the following technologies: yield monitor, GPS and auto-swath. Here are the complete results: 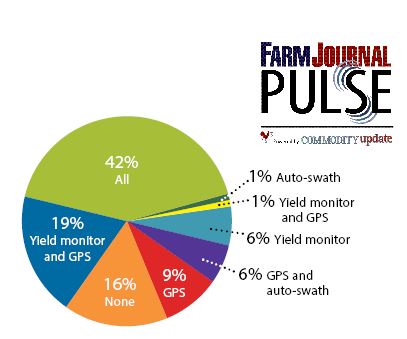