The Good and Bad of 2016 Grain Prices 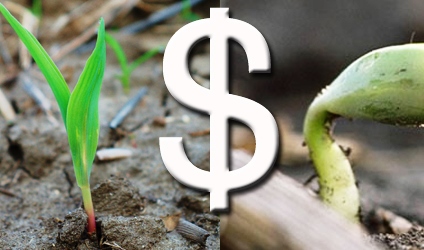 ‘Tis the season to speculate. Will 2016 grain prices be naughty or nice?

With the highest world corn and soybean stocks in more than a decade, many farmers remain skeptical a rebound in prices for 2016 is likely. A strong dollar also creates problems for farmers hoping to move grain this winter. That’s because it lowers foreign countries’ buying power and makes foreign grain more competitively priced, according to Purdue ag economist Chris Hurt.

Because of this, odds favor a “sidewise price pattern” this winter until the excess supply situation is solved.

“However, the price pattern and marketing strategies vary for corn and soybeans,” Hurt adds.

Hurt expects corn prices to increase throughout the winter and spring at least enough to cover farmers’ on-farm storage expenses. He speculates corn could raise as high as $4.40 next summer.

“When one decides to price, they should probably price for next summer delivery,” he recommends. “The principal is to price for the delivery period that provides the most return above storage costs. This is called earning the carry in the market and is generally one of the best marketing strategies in periods of excess supplies.”

On the other hand, Hurt says he does not see soybean price bids to gain much into next spring and summer. The high could end up around $9.40 this winter in processing plants and could fall back in spring and summer, he estimates.

Continue to watch the weather in South America for a potential wildcard, Hurt recommends.

“The biggest impact would generally be on soybean prices, with corn moving in the same direction, but with a smaller magnitude of price change,” he says.

“Producer strategies … include watching closely for any price rally to sell more bushels,” he says. “The current tight storing pattern suggests many producers are doing this. Secondly, striving to drive down costs per bushel downward is always an important strategy.”

“Hopefully some progress will be made each year in narrowing the current negative margins,” he says. “By late this decade, producers will have adjusted their costs to be in better alignment with revenues.”