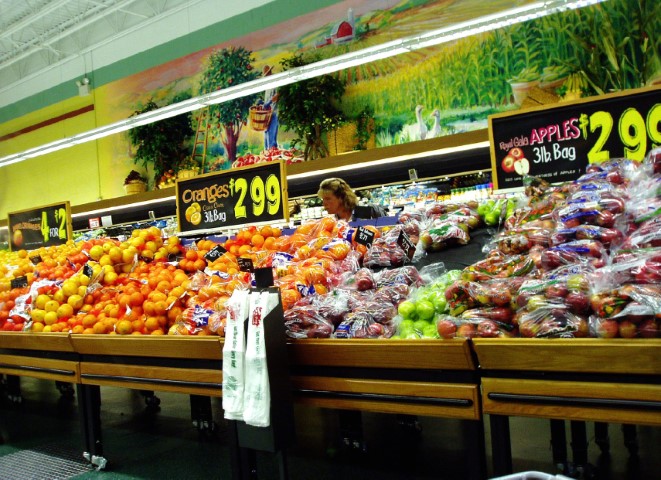 Over much of the past 30 years, Whole Foods Market co-founder John Mackey enjoyed wild success selling organic groceries to the masses. That brought media buzz, fast growth, and high profit margins to his grocery chain. It’s also attracted imitators. Now, with the likes of Kroger and Wal-Mart Stores muscling into everything from organic milk to sustainably raised salmon, Mackey finds himself fending off challenges from bigger rivals intent on eating Whole Foods’ lunch.

Just how well the competition is doing became clear on May 6 when Whole Foods reported that sales growth at stores open more than 57 weeks had slowed to 3.6 percent in the most recent quarter, well off the 5.3 percent gain forecast by analysts. Mackey also announced a plan to revive growth by starting a lower-priced chain aimed at millennials next year. The disappointing growth and seeming change in strategy spooked investors, who trimmed almost 10 percent from Whole Foods’ stock price on the day after the news.

“Business has really slowed down compared to what it used to be,” says Brian Yarbrough, an analyst at Edward Jones. “I fear they’re being a little complacent about what’s going on in the competitive environment.”

So far, Whole Foods has said only that its as-yet-unnamed chain for millennials will be smaller and more focused on value, convenience, and technology than traditional Whole Foods markets. They’ll also be cheaper to open and build, Mackey said.

With the new stores, Whole Foods is targeting younger consumers who may not be as dazzled by its organic offerings, particularly when many of those items are increasingly available at their neighborhood grocery stores, says Virginia Morris, vice president for global consumer strategy at retailing consultant Daymon Worldwide. “It’s not unique to millennials—they’ve grown up with it,” she says. “There’s no cachet.”

The grocer was founded in 1978 in Austin, Texas, by Mackey and a former girlfriend. It expanded quickly in the 2000s—there were fewer than 200 Whole Foods stores in 2006, compared with more than 400 now—as it helped introduce items such as kale and quinoa to mainstream Americans.

In its glory days, from 2000 to 2008, Whole Foods’ average annual sales growth was 20.4 percent. Stores opened quickly, as the company snatched up cheap real estate that defunct retailers such as Circuit City had abandoned. Those gains slowed to 9.9 percent in the fiscal year ended Sept. 28, 2014, the smallest annual increase since 2009. Kroger and Fresh Market, which sells high-end produce, both logged better sales growth in their latest fiscal years.

To hold on to shoppers, Whole Foods since 2014 has focused on lowering prices, especially on fresh fruits and vegetables. It also started running its first national ads, dubbing its campaign “Values matter.” But it hasn’t pulled back on the fancy amenities that have given it an image to match its prices. A new store in Boston, for instance, has a spa; many others offer valet parking.

Kroger’s natural and organic Simple Truth line has become a $1 billion-a-year brand. Costco Wholesale sells organic and grass-fed beef and organic coconut oil under its Kirkland Signature brand; its total organic sales were close to $3 billion last year. Even Wal-Mart is hawking everything from organic chia seeds to its Wild Oats Marketplace organic marinara sauce. There are about 3,800 Wal-Mart stores in the U.S. that have at least 30 Wild Oats items, the company says, plus about 2,300 Walmarts have separate organic produce sections. “You’ve got a number of competitors out in the marketplace that are growing very rapidly—Kroger, Sprouts Farmers Market, Trader Joe’s, Fresh Market,” says Bruce Cohen, senior partner at consulting firm Kurt Salmon. “It’s caused Whole Foods to pause.”

Whole Foods concedes that rivals are encroaching on its sales gains. “Everybody is jumping kind of on the natural and organic food bandwagon, and that’s really frankly due to our success,” Mackey said on a May 6 analyst call. He and co-Chief Executive Officer Walter Robb declined to be interviewed for this story.

Developing a grocer specifically for millennials could be a gamble. Americans under the age of 35 prefer natural and organic food, which often costs more, and seek more transparency on labels, according to recent Goldman Sachs research. Yet, while millennials tend to marry later and put off having kids, once they settle down and form families, their shopping habits aren’t that unusual, says Sucharita Mulpuru, a Forrester Research retail analyst. “It’s all delayed, but once those things happen, they spend just like their parents.” That means the biggest determinants of where they will shop will be value, convenience, and selection.

Even if Mackey is right about a need for stores tailored to a younger demographic, his new tack could present problems, says Edward Jones’s Yarbrough. The smaller locations will likely have lower profit margins and may cannibalize customers from Whole Foods’ namesake chain, he says.

Some analysts think Whole Foods may be taking aim at Trader Joe’s with its new concept. That 440-store chain appeals to young consumers who have broad, global tastes and like to hunt for items they might not find elsewhere, Daymon’s Morris says. But Trader Joe’s benefits from a perception that its products are cheap-chic, while Whole Foods continues to grapple with its “Whole Paycheck” image. Says Morris: “That’s something they really haven’t been able to shake.”