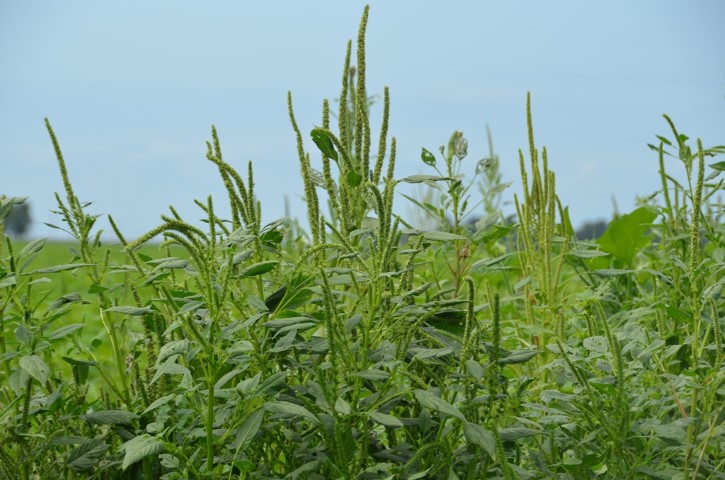 Weeds in a field
( Sonja Begemann )

When rolling through your corn or soybean fields in the combine you’re looking for yield, yield, yield, but when you start seeing weeds rather than crop, you could be in for an unfortunate surprise and a challenging next year.

“It’s really critical that farmers recognize that there is a significant cost to those weeds out there,” says Bob Hartzler, Iowa State University Extension weed scientist. “It might not even affect yields or harvest efficiency this year, but it does influence their ability to successfully control weeds in the future.”

Take the right steps to make sure you gain control of the growing weed seed banks in your fields. Figure out what weeds are out there, if they’re resistant, if there was herbicide application error and how you can avoid this problem in the future.

Determine what happened—how did these weeds get here? “In Indiana, a lot of weeds got away due to excess rain,” says Bill Johnson, Purdue University Extension weed scientist. Alternatively, states with droughty conditions might not have gotten enough rainfall to adequately activate herbicides—which could lead to escapes.

In addition to weather concerns, you need to look for patterns in your fields. Does it look like just one or two rows are weedy in each sprayer pass? It could be a clogged nozzle, for example. However, if you’re noticing just one or two types of weeds throughout the field it could be a sign of resistance—you might be able to send tissue samples into a university to test for specific types of resistance, such as University of Illinois with waterhemp.

Don’t always assume weeds that make it to harvest are resistant, though. Take the time to analyze what you did right and wrong before claiming resistance. “This year many applications were made in hot periods that stressed the crop and weeds, and if weeds are under heat and drought stress, the herbicide won’t be as effective,” Hartzler says. “You could also have some that emerged after the final herbicide application.”

Don’t accept the status quo of just a few escapes. In the case of waterhemp, a single escape can produce a quarter of a million seeds that plague your fields for up to five years.

“Escapes allow the weed seed bank to build up and can allow new herbicide resistances to develop,” Hartzler says. “The two simplest solutions are to go to more narrow row spacing or include a residual herbicide with post emergent application.”

Many farmers gave residual herbicides a try this year, but weather could have hindered some of their success. Regardless, Hartzler says it’s worth the effort because weed seed build up can happen quickly and take years to reverse.

“The big learning point here is we cannot minimize our trips over fields to control weeds—a year like this just highlights the shortcomings of that approach,” Johnson says. “If you have weeds now, focus on minimizing seed spread.”

Watch for prolific weeds. It’s never good to find weeds growing at the end of the season, but if it’s waterhemp, Palmer amaranth, giant ragweed or marestail it could mean even more trouble next year.

Use these notes—what weeds are present, how they got there and how much weed seed was produced to plan successful weed suppression next season. After all, the only good weed is a dead one.