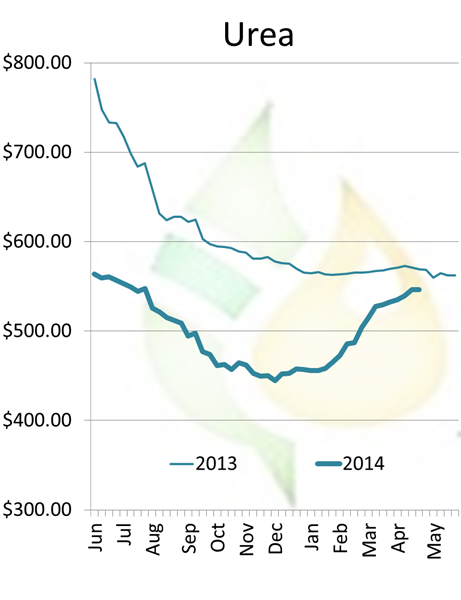 Urea -- The regional average price firmed just 12 cents on the week to $546.12/st. Suppliers continue to position product across the nation and we expect a slight uptick in pricing before Chinese supplies once again flood the market. It is hard to find anyone who believes urea will have anyplacwe to go but down this summer. But prices will likely hold in place for a few weeks as suppliers will look to capitalize on product on hand before lower priced Chinese material arrives.

Also limiting prices is a late start to the season. However, it is only mid-April and there is still plenty of yeild potnetial to be had. After last year's rainy start to the crop, growers are less fearful of the weather and can plant crops in a big hurry if the weather strings four or five good days together. That has many fertilizer purchases waiting to see how the spring plays out. Thos hold outs are smart to do so because while we expect a little bit more upside action for another two weeks, retail urea will head lower once spring demand subsides -- but first, spring demand has to show up.

We are 80% filled for spring/summer urea and will fill the remaining 20% on a clear 'buy' signal in the next few weeks. 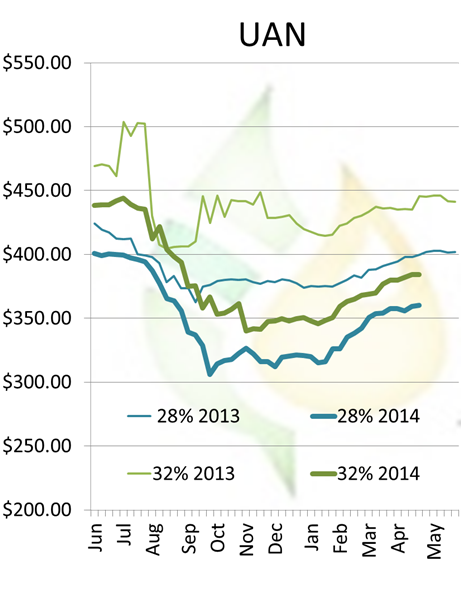 UAN solutions -- This week, 32% firmed 36 cents by the ton while 28% added 76 cents. The national supply is currently strong enough to hold prices in place, but retailers are hesitant to overextend UAN inventoires as anhydrous movement has been very strong. The addition of less than one dollar per ton on the week for both 28% and 32% solutions may indicate liquid nitrogen demand has found its line in the sand on price.

We are 80% filled here for spring/summer UAN. We will fill the remaining 20% as needed, and as dictated by the weather. That 20% may come our way on price, as we have anticipated and we should have some downside action if anhydrous applications proceed uninterrupted. However, since dealers are at their 'bottom dollar' and so far unwilling to make a deal, the potential for higher prices amid late season demand is real if anhydrous cannot pull the N wagon. 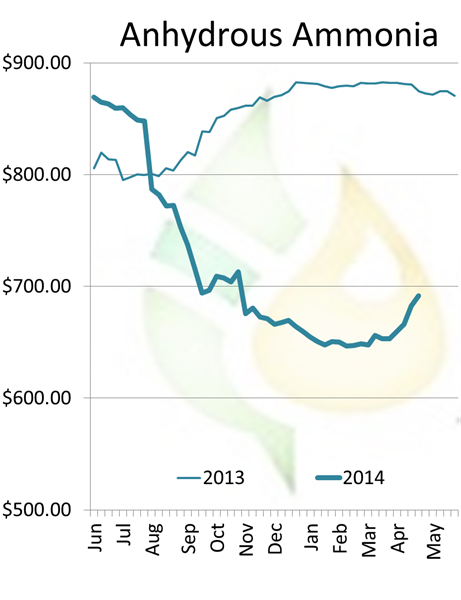 Anhydrous -- NH3 added $9.11 per ton on the week to $691.50. Late last week, fieldwork skidded to a halt in the central Be;lt where large producers had already started applying a little NH3. By Friday the feilds were clear and there wasn't a tractor to be found. that was in anticipation of rain that changed to snow over the weekend.

Cooler temperatures this week will limit iron in the field and may even send soil temps backward. meanwhile, the nurse tank filler at my local co-op is putting in long days and late suppers to fill demand. I expect next week, my friend Paul will be very busy again once the cool weagther moves on.

Pipeline and rail problems have forced some suppliers to get creative and seek out supplies in neighboring states. The added week of down-time will give the national NH3 supply a chance to advance into pockets of shortage, and limit parabolic price potential. We expect higher prices over the next few weeks.

We filled the last of our anhydrous a few weeks ago and are currently 100% filled for spring and summer.

The Margins -- Also adding upward potential are the margins which has anhydrous underpriced compared to the rest of the nitrogen segment. NH3 shorts urea 13 1/2 cents by the pound of N; solutions are 7 3/4 and 9 1/4 cents ahead of NH3 on price.

The following is an updated table of nitrogen pricing by state by the pound of N. 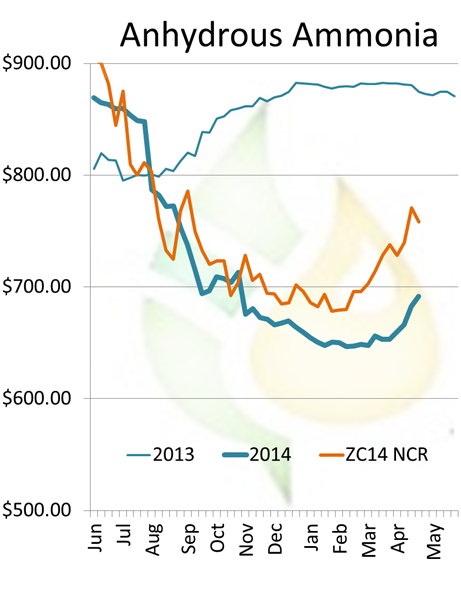 December 2014 corn opened today at $5.03 -- 1 1/2 cents below the previous N Files. At trendline 160bu/acre and one retail short ton of anhydrous ammonia at $691.50, the ZCZ14/NH3 spread narrows 11.51 points on the week to stand at -73.30. A negative number here indicates one short ton of anhydrous is priced below expected new-crop revenue per acre based on December '14 corn futures.

MosaicCo. reports wholesale urea moved modestly lower out of the Black Sea, the Middle East, at NOLA and in the Corn Belt again this week. Tampa Ammonia remains steady on the week at $580.00, but that price is till $17.00 below year-ago.