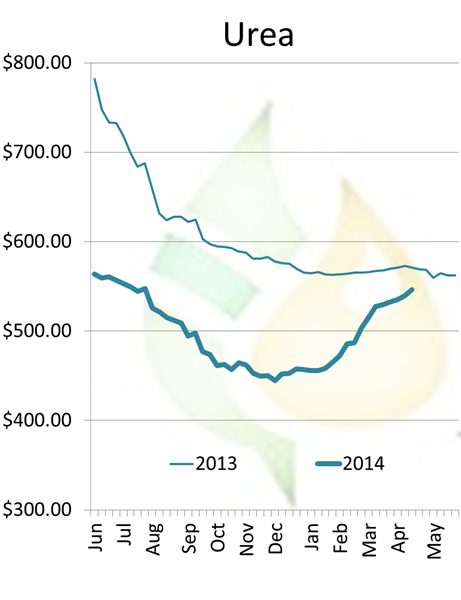 Urea -- The regional average price firmed $6.32 on the week to $546.00/st. Southern topdress is humming along and wholesalers reported last week that tonnage was moving to suppliers almost as quickly as they could find it. End users have not yet entered the market in earnest and dealers are reportedly holding the line on pricing. Missouri added ten dollars per ton, the Dakotas and Kansas each added twenty dollars. Everybody else was +/- ten dollars per ton.

The fact that Kansas added twenty dollars to the state average urea price is telling and southern states generally give cues to the future of northern prices. However, the expectation is for prices to remain at current levels with the possibility of lower prices in the next few weeks, based on Chinese oversupply. Look for dealers to hold the line on pricing, and for end users to hold as well with the expectation for mildly lower prices ahead.

We are 80% filled for spring/summer urea and will fill the remaining 20% on a clear 'buy' signal in the next few weeks. 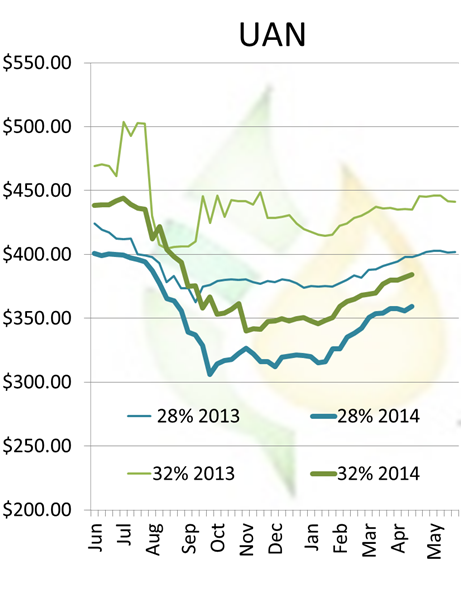 UAN solutions -- This week, 32% firmed $2.16 by the ton while 28% added $3.49. The current import pace is running behind last year by roughly a half million tons. That may add some strength to the market, but not until end-users book some tonnage. As with urea, dealers are holding out for current prices as prices may fall if spring rains do not threaten to flush anhydrous.

If preplant applications are washed out, as many were last year, the year-over UAN supply lag may become an issue, but nitrogen solutions are currently in 'wait-and-see' mode. If dealers overstock now, and the rain cooperates, summer UAN prices will be much lower than today. However, if spring rains excite UAN applications, the limited product could easily bottleneck and support higher pricing.

We are 80% filled here for spring/summer UAN. We will fill the remaining 20% as needed, and as dictated by the weather. 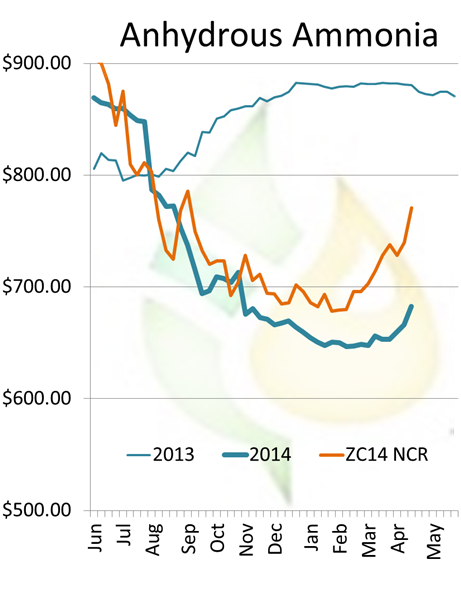 Anhydrous -- NH3 added $16.21 per ton on the week to $682.39. This is the kind of upside drift we have been expecting from anhydrous and the entrance of end-users into the equation has put the pricing rubber to the road. Demand has been a big question mark for many this spring, but a rally in corn has expected new-crop revenue well into the $700's, and that will support strong spring fertilizer applications.

By now we've got the December corn contract above $5.00 ($5.08 at noon CT) and that should at least fan the flame for NH3 to run higher. Supply disruptions across the Midwest are making it hard for some to get ahold of product and is also aiding price recovery for all fertilizers. Rail is at the center of delivery delays which could last up to three weeks.

Also note, Kansas NH3 is up just shy of fifty dollars per ton this week. That's a strong indication that northern prices may inflate soon.

We filled the last of our anhydrous a few weeks ago and are currently 100% filled for spring and summer.

The Margins -- Also adding upward potential are the margins which has anhydrous ridiculously underpriced compared to the rest of the nitrogen segment. NH3 shorts urea 13 3/4 cents by the pound of N; solutions are 7 3/4 and 9 1/2 cents ahead of NH3 on price.

The following is an updated table of nitrogen pricing by state by the pound of N.

MosaicCo. reports wholesale urea moved modestly lower out of the Black Sea, the Middle East, at NOLA and in the Corn Belt. Tampa Ammonia is steady on the week at $580.00, but that price is till $17.00 below year-ago.