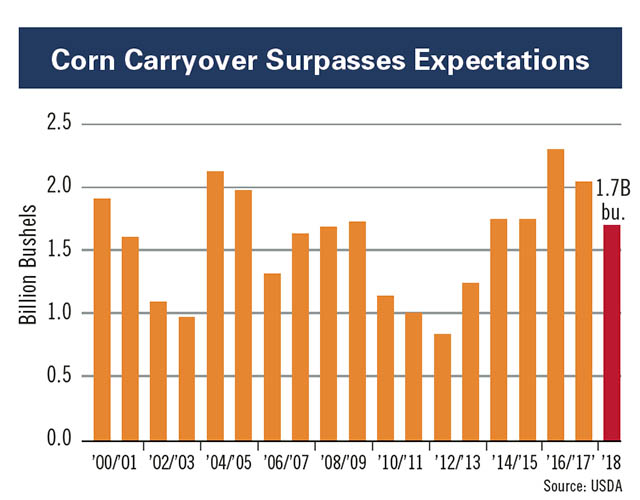 USDA’s first survey-based corn crop estimate came in at 14.6 billion bushels. That puts the crop at the third highest on record, driven by a yield of 178.4 bu. per acre, which would top the 2017 record yield by 1.8 bu. per acre. Record yields are expected in six states—Alabama, Illinois, Nebraska, Ohio, South Dakota and Tennessee. USDA also reported record ear counts in the 10 objective yield states.

In August, USDA calculated ear weight at 0.36 lb. per ear—the third highest behind 2017 and the record of just over 0.36 lb. per ear in 2016. As the combines roll, ear weights will play a bigger significance in determining USDA’s average yield. Because the crop has been pushed to reach the finish line, some speculate ears might not accumulate the same weight they have in recent years, which could pull down yield.

With another record crop, soybean carryover is projected to balloon to a record 785 million bushels, up 355 million bushels from 2017/18 and 483 million bushels more than two years ago. Of course, USDA’s new-crop usage forecasts assume Chinese tariffs will remain in place through the 2018/19 marketing year.

In the July World Agricultural Supply and Demand Estimates report, which occurred after the 25% Chinese tariffs were enacted, USDA lopped 250 million bushels off expected U.S. soybean exports for this marketing year. That’s an aggressive stance since other buyers will likely make up for lost Chinese demand. In fact, new-crop soybean export commitments to non-Chinese buyers have recently been a record high.

Even if the U.S. gets back all of the 250 million bushels of exports USDA slashed from its balance sheet, ending stocks for the 2018/19 marketing year would still be an ample 535 million bushels. If soybean yields and production expand from initial estimates, it would mean even more demand must be found.

In the case of soybeans, USDA’s August crop estimate in the past 20 years has been below its final figure 14 years and above six years. That suggests there’s a two-thirds chance USDA’s August crop estimate is not the highest the market will see this year. USDA’s smallest miss was 6 million bushels, with its largest difference between August and the final number being 408 million bushels.