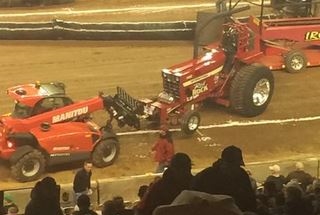 Farmers, media and others from around the country took to Twitter this week to converse about the 2015 National Farm Machinery Show. The annual event in Louisville, Ky., is celebrating its 50th anniversary.

Here’s a snapshot featuring 10 of our favorite tweets from the event.

It has begun, ladies and gentleman! #NFMS15 pic.twitter.com/nqJ00yisP4

All these #NFMS15 tweets are making me jealous, I'm going to have to make a point to get to Louisville next year!!!

Want to see the South Wing of the #NFMS15? Give us 40 seconds of your time http://t.co/mGwMcfpD4u

wondering how many face to face connections are being made at #NFMS15 this week after initial social media interaction. #ontag #farmertech

Thinking I would like this #Ram #Truck I seen at #NFMS15, who volunteers to tell my wife @RamTrucks #ag #agmachinery pic.twitter.com/IJabS2vr5H

My bed has never felt sooo good! Louisville got the best of me! #NFMS15

Signal to Noise: If Congress Fails to Act on Aid, USDA Still Has Money
USDA Confirms Biggest U.S. Soy Sale to China Since June
Can Corn and Soybean Prices Handle Possible Record National Yields?
The produce department of the future
Restocking those shelves