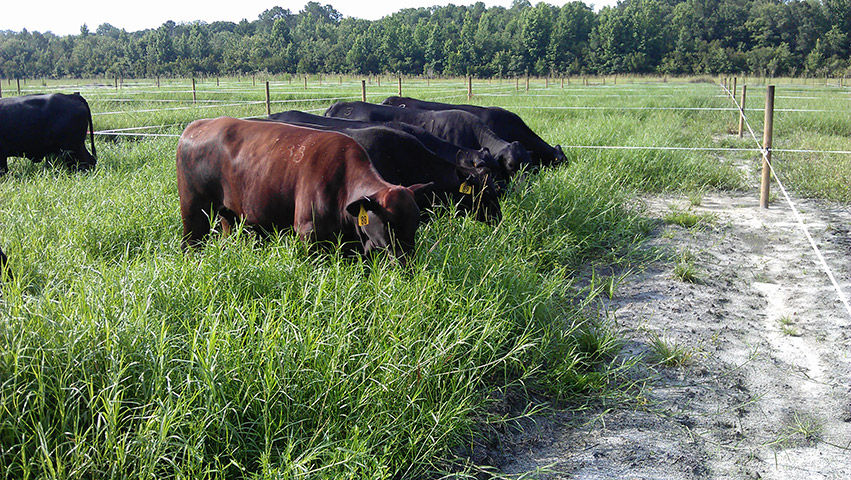 The University of Florida, in partnership with Florida Foundation Seed Producers Inc., has released two new limpograss cultivars so ranchers can increase the forage variety they feed their cattle.

The new lines, limpograsses 4F and 10, have superior traits, including persistence under grazing, good production and nutritive value, said Joao Vendramini, associate professor of agronomy at the Range Cattle Research and Education Center in Ona and one of the cultivars’ developers.

Limpograss 10 will be called Gibtuck in honor of Gilbert Tucker, who graduated from UF and, among his positions, worked as a ranch manager in Brevard County and as an animal husbandry expert at the Range Cattle REC, part of UF’s Institute of Food and Agricultural Sciences.

“The creation of these hybrids and subsequent release of planting material to the cattle producers of Florida is an excellent example of UF/IFAS faculty working with stakeholders to provide solutions impacting the productivity of their farms and ranches,” said John Arthington, animal sciences professor and director of the Range Cattle REC.

Vendramini worked with Quesenberry and agronomy professors Ann Blount and Lynn Sollenberger to breed the new cultivars, which were approved by the UF/IFAS Cultivar Release Committee in April.

Florida Foundation Seed Producers Inc. worked with the Florida Cattlemen’s Association to select four to five producers from South Florida and two from North Florida to plant the new cultivars in 2014. Those producers will be responsible for increasing the planted area and planting material available for the next year and further distribute such increased stocks to other Florida producers in 2015.

The select group of producers increasing stocks will pay annual membership dues of $25 to FFSP and a one-time fee to offset the costs associated with the production of the UF/IFAS breeder stocks.

In 2004, the Florida Cattlemen’s Association Research and Education Committee identified the development of new limpograss cultivars as one of its highest priorities. The traits the committee wanted most were the persistence under grazing shown by the widely used Floralta. UF/IFAS scientists combined that trait with the nutritive value of Bigalta, Quesenberry said.

In spring 2005, UF/IFAS agronomy researchers responded by crossing cultivars Floralta and Bigalta in a greenhouse on the Gainesville campus. From those crosses, scientists generated 51 experimental hybrids.

They planted the experimental hybrids at the Agronomy Forage Research Unit at Hague, north of Gainesville, the Range Cattle REC in Ona and at the North Florida Research and Education Center in Marianna and evaluated the hybrids for four years before selecting lines 4F and 10.