Ukraine Dairy – A Time of Crisis 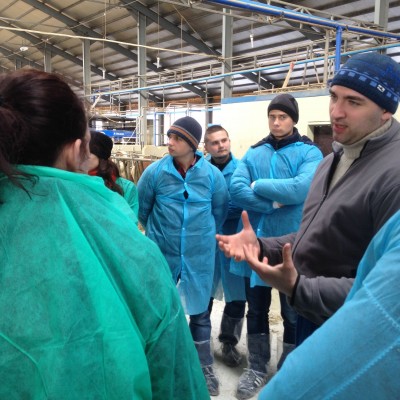 Ukrainian dairy producers are facing a time of unprecedented crisis, yet they are resilient, resourceful and determined to meet the challenges.
By: Phil Durst, Michigan State University Extension

In 2009, U.S. dairy farmers saw dramatic changes as milk prices dropped and feed prices increased. It was a time of crisis when some dairies were forced out of business and others have taken years to recover financially. Dairies in Ukraine are experiencing similar but worse crisis than what U.S. producers experienced in 2009.

This year, Ukraine is at war with an invading force at their eastern border where many Ukrainian citizens are split in their support between Ukraine and Russia. As a result, the country as a whole is reeling; runaway inflation has devalued the currency forcing prices for imports higher and exports have been dramatically decreased due to political pressure that has closed the Russian markets.

The Ukrainian currency is currently valued at around one-third (23 hryvnia per dollar) of what it was at the same time last year (8 hryvnia per dollar). Therefore, everything imported costs nearly three times as much. The increased costs for all citizens have reduced their buying power so that the dairy products they purchased a year ago are less likely to be purchased now.

Previously, Ukraine exported a significant quantity and value of dairy products to Russia, but since the revolution last year against the Russian-supported ruler, Russia has cut off imports from Ukraine. The loss of most of their export market was critical. In addition, when Russia seized the Crimean peninsula, Ukraine lost that domestic market as well as the land. The same holds true in eastern areas of the country.

This was the scenario during which the VIII Ukrainian Dairy Congress was held in March 2105. And yet, approximately 900 came to the Congress to learn, share, and fellowship together. Along with two colleagues from Michigan State University Extension, I was invited to present at the Dairy Congress.

The Congress began with the playing and singing of the Ukrainian national anthem as national pride has swelled during the past 16 months since the protests started in Kiev that eventually brought down the government. The Ukrainian flag stood beside the podium, a poignant reminder that the sovereignty of the nation is threatened and many have died defending the country.

There was great frustration on the part of many farmers. One stood up and said that dairy was no longer a business; it was a hobby because he was not making any money at it. There were fractions evident between producers and the processors who want to keep prices low enough to keep selling products. Indeed, one young mother of two told me that if dairy prices went up, she would not be able to buy the same amount.

Yet, producers, processors and industry people came to the Dairy Congress because they believe in the future of the industry and they are hungry to develop export markets where they can increase the demand for their milk and increase price.

Andrii Dykun, Chairman of the Association of Dairy producers in Ukraine, said that this was a critical time for dairy and challenged all who were there by saying “either we change our attitude and ways of doing things, or we get out of this business”. That is a stark reminder of the balance in which the dairy industry hangs. But sometimes crisis causes people to focus on what is most important and that can push an industry forward faster.

Ukraine produces only about a tenth of the milk that the U.S. produces annually. There are many obstacles to growth for the industry, yet it is a country with tremendous potential because of the land and soils, an educated workforce and the desire to improve. They have a difficult road ahead. It was a privilege to be able to help encourage and guide them in travelling that road.

Tags:
Ukraine
That fellow is in quite a pickle.
In The Shop: The Final Touch to Welding
Brazil Says It Has U.S. Approval To Resume Beef Imports
San Antonio Barrow Show Winner Captures Hearts and Breaks Records
USDA drops 3 from $10.7 million Adams PACA case