By Gary Schnitkey and Darrel Good, University of Illinois

Figure 1 shows Market Year Average (MYA) prices from 1947 through 2013. These prices represent cash prices received by U.S. farmers. They are calculated by the National Agricultural Statistical Service (NASS), an agency of the U.S Department of Agriculture. Since 1985, the MYA price for corn represents the quantity-weighted average of prices received from September through August. As a result, the 2013 MYA price of $4.65 shown in Figure 1 is a projection, as the 2013 marketing year has not come to an end. 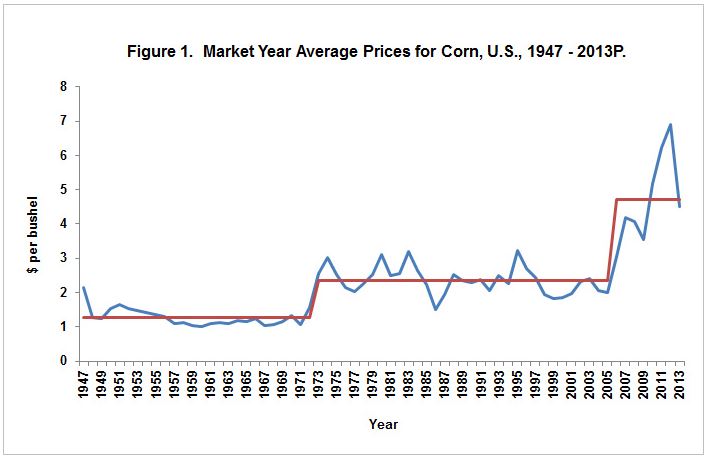 The distribution of MYA price is estimated based on a three step procedure. First, stable price periods are identified and price means are calculated for each period. During these stable periods, prices varied but did not trend up or down. Second, yearly price deviations from those period means are computed, yielding price deviations for each year. Third, a future price distribution is projected based on these historical price deviations using a projection for the future MYA price. This procedure is applied to corn in the following three sections.

Price periods since World War II are largely associated with changes in demand. There was a period of relatively stable prices from 1947 through 1972 in which prices did not trend up or down, but exhibited variability around a mean of $1.28 per bushel. This period of non-trending prices ended in 1972. 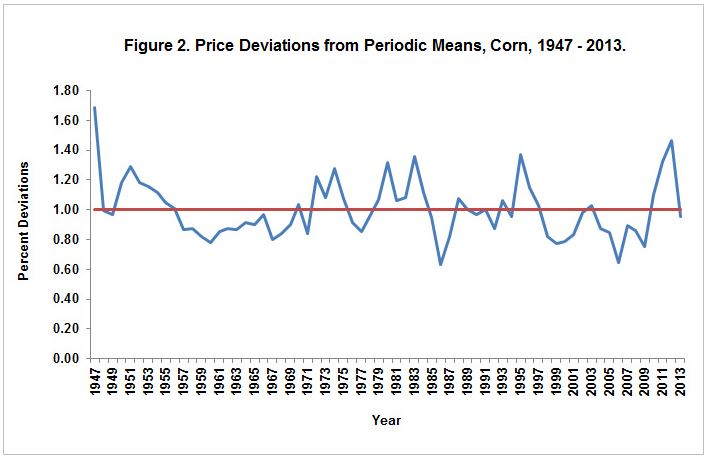 The price deviations calculated above are used to develop a projected distribution of MYA prices based on a projected mean MYA price. This mean represents the new period mean since 2006. While a new higher plateau likely has been achieved, the exact level of this mean is not known. The $4.72 mean since 2006 may be too high, as it is based on few price observations and does not include a "low" price period. It does seem reasonable to believe that the new mean is in the mid-$4.00 per bushel range. The increase in means occurring in the early 1970s was an 84% increase ($2.36 / $1.28 - 1). A similar increase in 2006 would result in a new mean price of $4.34. Current prices on Chicago Mercantile Exchange future prices suggest prices in the mid to high $4.00 range for the foreseeable future. A $4.50 price is used here. This price is consistent with earlier projections of average prices in the current price era developed by Irwin and Good (see here for more details).

The $4.50 price differs from other projections, some of which have been considerably lower than the $4.50 price. For example, USDA long-term baseline released in February 2014 has corn MYA prices below $4.00 for the 2014 through 2021 marketing years (see here for more details). While prices below $4.00 can and will likely occur, a sustained period with MYA prices below $4.00 for several years seems unlikely. In any case, as illustrated below, differing prices could be used to develop the MYA distribution, resulting in differing calculations of PLC payments. 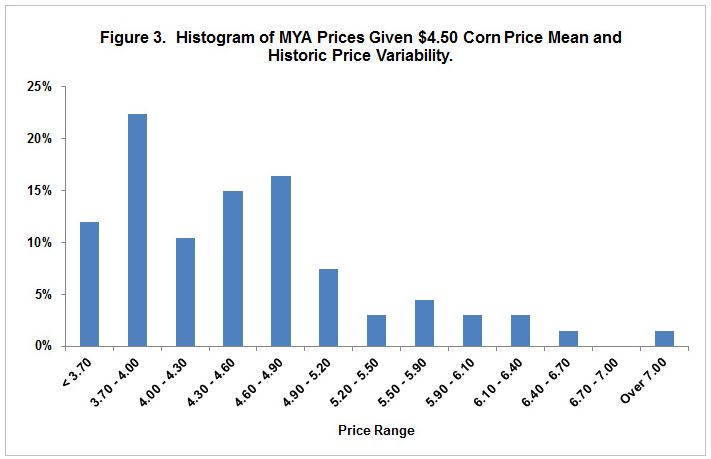 Figure 3 shows the resulting projected price distribution. Historical prices suggest a great deal of price variability moving forward, with a wide range and chances of both high and low prices. There is a 12% chance of a price below the $3.70, the reference price below which PLC payments will occur for corn.

Projected PLC payments are estimated using the price distribution illustrated in Figure 3. When a price is below $3.70, a PLC payment rate is calculated as $3.70 minus the MYA price, with the result multiplied by .85. The .85 factor represents the fact that PLC payments will be paid on 85% of base acres. The PLC payment rate is averaged over all observations, including those that are zero.

With a mean of $4.50, the price distribution in Figure 3 indicates a 12% chance of a PLC payment. The PLC payment rate is $.033 per bushel. A farm having a 145 bushel base yield, close to the average for central Illinois, has an average PLC payment of $4.79 per base acre.

Different means will impact the probability of payment and PLC rate:

For any assumed level of MYA price mean, the above methodology for estimating MYA price distributions and PLC rates are based on two important assumptions. The first is that there is a period of relative price stability occurring now similar to those that have occurred in the past. If there is a price regime change, either higher or lower, the above distributions are not valid. The second is that the historic price variability serves as an indicator of price variability in the future. If price variability is higher than previous variability, then PLC payment rates would be lower, and vice versa.

MYA prices are time dependent, next year's price is correlated to this year's price (see here for a discussion). This factor is not taken into consideration in estimated payments shown above.