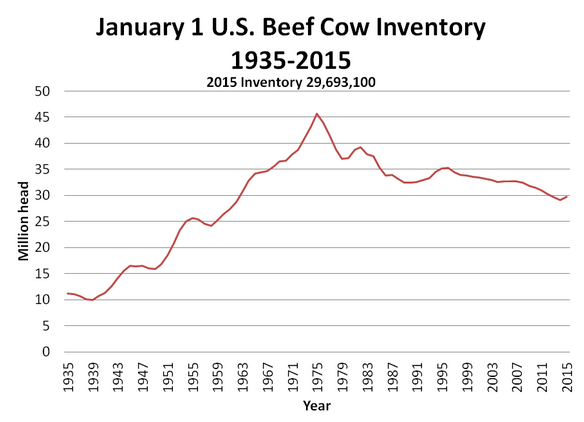 The U.S. beef cow herd grew by 2.1 percent in 2014 to 29.7 million head according to the January 2015 Cattle Report.  Though beef cow herd expansion was anticipated, this was a larger than expected increase.  The largest increases were in Texas, at 107 percent of last year; and Oklahoma, up 6 percent from one year ago.   These two states accounted for 62 percent of the total increase in the beef cow herd. Kansas and Missouri each accounted for about 10 percent of the cow herd increase meaning that those four states accounted for 82 percent of the total increase in beef cows.  The increase in Texas beef cow inventory was higher than expected because, despite improved conditions, significant areas of drought remain in the state.  There were some other surprising data in the report including the fact that California beef cow inventories were unchanged despite the severe drought in 2014, along with Oregon, which also experienced significant drought but had a 1.7 percent increase in the beef cow herd in the state.  The lack of growth in the Northern Plains was also somewhat surprising with decreased beef cow herds in North and South Dakota and a Nebraska beef cow herd unchanged from one year ago. 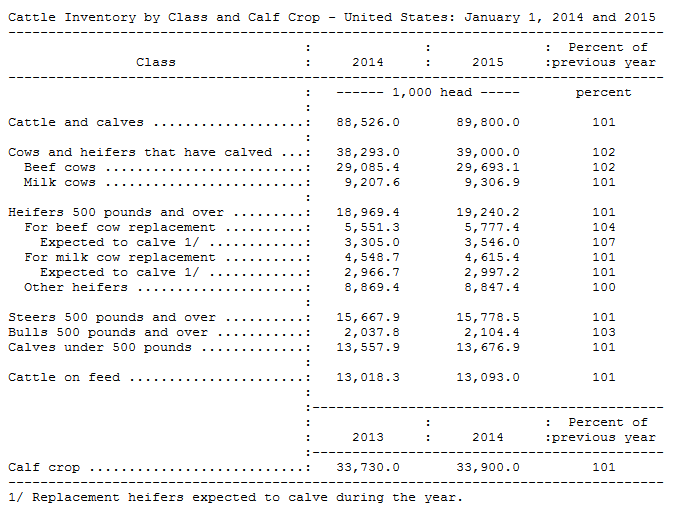 This report does not change market fundamentals much, if any, in 2015.  The fact that there are more cows than expected does not change the timing of beef production in 2015.   The marginal increase in estimated feeder provides little relief to tight feeder numbers and may be offset with even more heifer retention and the possibility of smaller feeder cattle imports from Mexico and Canada this year.  The jump-start to herd expansion could shave a year off of the time needed for herd rebuilding, depending on herd expansion in 2015 and beyond.  In any event, herd expansion is expected to continue until late in the decade baring setbacks from drought.