Export to China is having an impact on U.S. corn and DDGS markets.​
By: Kim Dillivan, Crops Business Management Field Specialist, SDSU Extension

For decades, international markets have been an important destination for U.S. agriculture products. While the potential for U.S. producers to export excess production primarily depends on economic factors affecting supply and demand, world geopolitical events also impact international trade. During the past year, decisions made by China and Russia have potential to negatively impact trade with the U.S. In China, authorities have begun enforcement of a zero tolerance policy in regard to the biotech trait MIR 162. This action led to an ongoing disruption of U.S. corn shipments to China. Russia, in response to sanctions imposed because of their alleged military involvement in Ukraine, has initiated trade embargoes targeting agricultural products originating from Europe and the U.S. While most U.S. corn is consumed domestically (becoming feed for livestock or is used to produce ethanol), foreign markets represent an important source of demand for U.S. corn and distiller’s dried grains with solubles (DDGS).

U.S. Corn Exports to China
For almost a year, China has rejected U.S. shipments of corn allegedly containing traces of an unapproved genetic material called MIR 162. Used to combat various insect pests that attack corn plants, MIR 162 was detected by Chinese officials in corn shipments from the U.S. in late 2013. Corn containing MIR 162 has been approved for production in various countries such as the U.S., Argentina, and Brazil. And despite approval from other major corn import markets, such as the EU, the material has not been approved by China. (Approval has been pending in China for more than four years and during that period China has consistently imported corn containing the trait.) However, in November 2013, China began rejecting shipments of U.S. corn and by January 2014 corn exports to China had essentially fallen to zero (Figure 1).

U.S. Corn Exports to World
While U.S. corn exports to China were ending, other countries began to increase their purchases of U.S. corn. For example, quantities of U.S. corn shipped to Japan and South Korea have grown dramatically since January (Figure 1). Mexico also remains a reliable destination for U.S. corn.

Compared to marketing year 2012-13, many countries that import U.S. corn have significantly increased their purchases (Table 1), likely in response to a falling U.S. corn price. USDA estimates U.S. average corn price for the 2013-14 marketing year to be approximately $4.45 per bushel, compared to $6.89 per bushel for 2012-13. 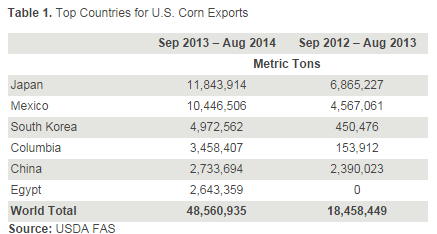 For the past two years, Russia has not been a significant importer of U.S. corn. For example, from September 2013 to June 2014, Russia imported only 4,742 metric tons of U.S. corn. One year earlier, corn exports from the U.S. to Russia were slightly higher at 5,906 metric tons. Russia does not import any DDGS from the U.S.

According to USDA, U.S. agricultural exports to Russia totaled $1.31 billion in 2013 (only 0.8% of total U.S. exports value). Russia’s self-imposed 1-year ban on food imports from the U.S. will primarily affect poultry meat, tree nuts, prepared foods, and fish products. USDA anticipates Russia’s share of U.S. agricultural exports to fall to approximately 0.3% by 2015 (value basis). Although Russia has recently imported significant amounts of soybeans and live cattle from the U.S., these products do not appear to be on Russia’s list of banned agricultural items, therefore trade of these products is expected to continue without interruption.

U.S. DDGS Exports to China
The U.S. Grains Council is requesting that China approve the biotech trait MIR 162. The request comes after China announced that certificates are now required from point-of-origin exporters, such as the U.S., that guarantee DDGS shipments are free of that particular genetically-modified material. According to the U.S. Grains Council, no U.S. government agency has authority to issue these certificates. Although Chinese officials have begun requesting these certificates from the U.S. government, the disruption in corn trade between China and the U.S. has apparently not spilled over into DDGS markets. As a result, China remains the primary market for U.S. DDGS exports (Figure 2). However, China’s announcement places current shipments and future sales of DDGS in jeopardy. It remains unclear whether any shipments of DDGS to China have been affected since the beginning of September.

U.S. DDGS Exports to World
Like corn, U.S. DDGS prices have fallen in the past two years. For example, the price per metric ton for Gulf DDGS fell from $360 in August 2012 to $180 in August 2014. As a result, many countries that import U.S. DDGS have increased their purchases compared to the same period one year earlier (Table 2). 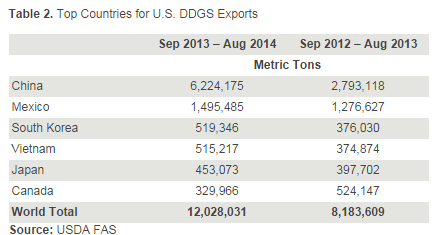 Outlook for U.S. Agricultural Exports
USDA predicts world economic growth to accelerate modestly in 2015, increasing from 2.7% in 2014 to 3.2% in 2015. If world economies improve overall, growing consumer incomes and spending will likely increase international demand for U.S. agricultural products. USDA also anticipates the U.S. dollar remaining weak but stable in 2014 and 2015. However, the dollar is expected to depreciate relative to many currencies in Asia, including currencies from some of our major trading partners. As a result, U.S. agricultural exports are expected to remain competitive into 2015.