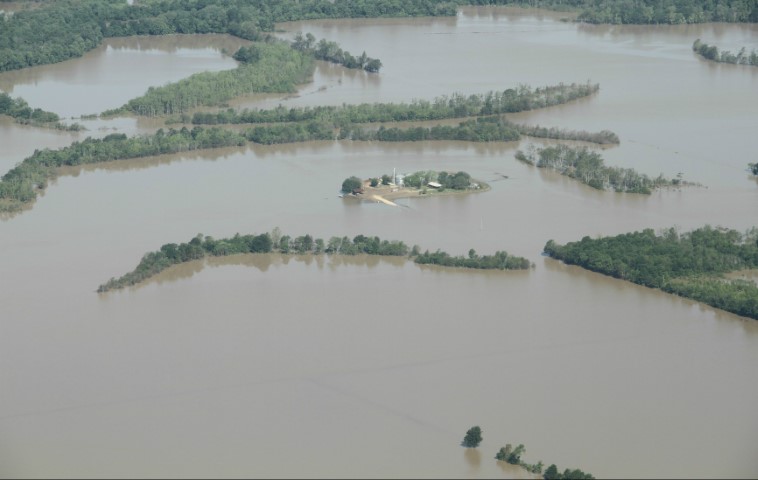 University of Arkansas preliminary estimates place total damage to agriculture at $64.5 million, and the numbers could grow far higher after accounting for farm structure and grain storage losses.
( Chris Benentt )

Nebraska’s corn fields are so flooded that farmers are posting videos of themselves wakeboarding.

Spring downpours are pummeling U.S. grain farmers, causing soggy fields and threatening crop disease. In the past 30 days, about 40 percent of the Midwest got twice the amount of normal rainfall, with soils saturated from Arkansas to Ohio, according to MDA Weather Services. While spring showers usually benefit crops, the precipitation has come fast enough to flood some corn and rice fields and trigger quality concerns about maturing wheat.

“Bad conditions got worse with rain on Friday,” said Brandon Bowser, regional manager for Harvest Land Cooperative, which has 26 agronomy locations in Indiana and Ohio. “There are lakes in some fields.”

Bowser said planting was off to a fast start in the second half of April, before 10 inches (25 centimeters) of May rainfall and lower temperatures erased early optimism. He estimates about a third of his region’s corn will be replanted, and surviving seedlings are at risk of blight.

The spring deluge is sparking a surprise grain rally amid the crop concerns. Corn and wheat are headed for monthly gains on the Chicago Board of Trade while rough-rice futures are headed for the biggest such advance in six years.

A storm system brought more than 2 inches of rain through the weekend to parts of Texas and eastward to Ohio and West Virginia, according to the Weather Prediction Center. Flood advisories have been posted along the Mississippi River and other waterways, many of which are still high after earlier downpours.

Two more storms are forecast for this week, keeping corn and soybean planters idled and increasing quality losses for U.S. winter wheat, Don Keeney, senior meteorologist at MDA in Gaithersburg, Maryland, said Monday. Temperatures will be as much as 2 degrees Fahrenheit below normal this week, slowing field drying and seed germination.

Rice, a much smaller crop, has also been pummeled by the deluge. University of Arkansas estimates 181,450 acres of newly-planted fields were lost to flooding, or about 15 percent of the area the U.S. Department of Agriculture had forecast to be seeded in the state, the top U.S. grower.

Even with the challenges, farmers have made speedy work of planting. U.S. sowing of corn, soybeans and spring wheat was ahead or even with the five-year average as of May 14, while corn emergence was behind schedule, government data show. The USDA will update its weekly crop-progress report at 4 p.m. Monday in Washington.

The correlation between mid-May corn planting and final yields is fairly weak, and summer weather is the more important factor, Professional Farmers of America said in a May 19 newsletter.

“We will know more in two weeks when the plants are bigger,” said Tom Hooper, director of business for Beck’s Hybrids, which sells seed in nine states from Wisconsin to Tennessee. “The crop can catch up fast.”