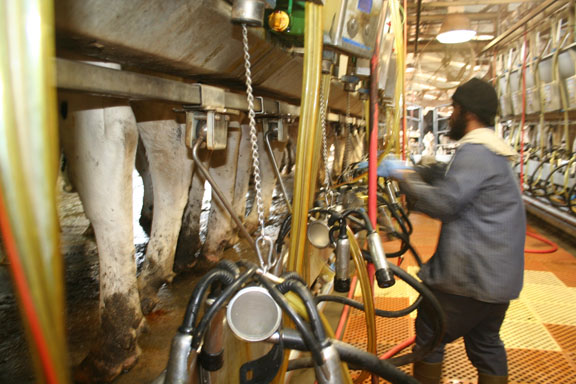 The increase over year-earlier levels is lower than many expected.

U.S. dairies produced 2.5% more milk in August than they did a year earlier, surprising market watchers who expected a greater increase.

USDA’s production number was "well below our expectations for 17.4 billion pounds," noted Dave Kurzawski, a risk management consultant with the Chicago office of INTL FCStone. The firm specializes in dairy risk-management and margin hedging programs and services.

The U.S. is projected to produce record milk production this year of 206.3 billion pounds, according to USDA's World Agricultural Supply and Demand Estimates, released Sept. 11.

Despite the decline from the prior month, this is the largest year-over-year cow number increase since May 2012, Dairy Farmers of America reported in today’s "DFA Today" e-newsletter.

While Kurzawski said his firm would expect to see a push higher in prices come Sunday night as a result of the bullish report, Schmahl didn’t anticipate much market influence by the report.

"These reports used to have a bigger impact," Schmahl said. "They’re really not market movers anymore. Now, they’re 30-45 days behind. August’s production has already been absorbed, processed and moved by the market."