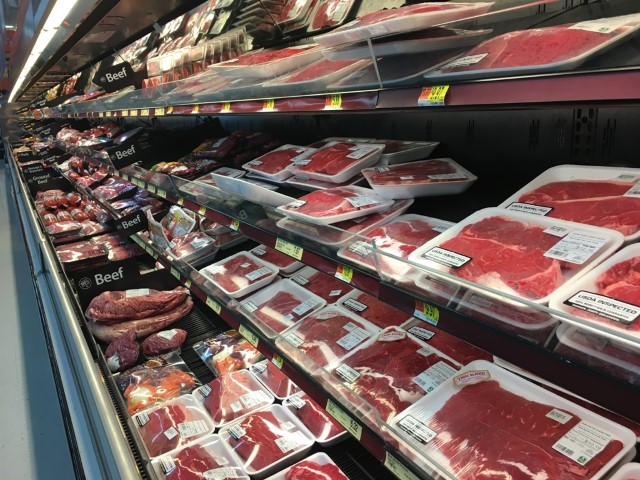 Just in time for Fourth of July barbecues, Wal-Mart Stores Inc. has upgraded its beef to certified Angus across the U.S. as the fight for food shoppers’ cash intensifies.

For the past year, the nation’s biggest grocer worked with meat giants including Tyson Foods Inc. and Cargill Inc. to secure a supply of Angus steaks and roasts at no additional cost to consumers, said Scott Neal, Wal-Mart’s senior vice president of meat, seafood and quality control. The higher-quality cuts have been available in all of Wal-Mart’s 4,700 U.S. stores since March, but the retailer hasn’t announced or advertised the shift yet.

The move is part of Wal-Mart’s response to rapidly intensifying competition: German discounters Aldi and Lidl are expanding aggressively and Amazon.com Inc.’s purchase of Whole Foods Markets Inc. threatens to upend the industry. Wal-Mart also wants to entice shoppers by offering curbside pickup of online grocery orders and improving the quality of fresh foods like produce and meat that are a key draw for customers.

“All purveyors of food are being forced to step up their game,” said Bill Lapp, president of consulting firm Advanced Economic Solutions. “There is such disruption in the grocery store sector that you have to do something.”

With its marbled, tender cuts, Angus beef has become synonymous with quality. Demand for the meat has skyrocketed in recent years, with fast-food chains like McDonald’s, Burger King and Hardee’s offering Angus burgers.

While U.S. beef consumption has dropped over the past decade because of a 2014 drought that cut the herd to the smallest since 1951, the USDA’s Economic Research Service is predicting a rebound thanks to increased supply. Demand could also increase now that China has restarted imports of U.S. beef, lifting a ban in place since 2003.

“Beef is an absolute opportunity for us in terms of where we can grow,” Wal-Mart’s Neal said in a phone interview. “Our market share is not where we want it to be relative to the rest of the store.”

The retailer’s “whole-muscle” beef product offering is now entirely Angus, he said, adding that Angus rib-eye steaks sell for just under $10 a pound. The change doesn’t affect Wal-Mart’s ground beef, which comes from a broader supply of meat that includes non-Angus sources.

Angus beef “delivers the eating experience that consumers are looking for,” said Jason Nichol, who oversees Tyson’s relationship with Wal-Mart as senior vice president. “We’ve been happy with the results to date.” A Cargill spokesman declined to comment.

Wal-Mart last upgraded its meat in 2011 when it moved from offering primarily Select beef, the lowest of the three government grades, to a blend of Select and Choice, the middle category. The change took eighteen months as suppliers had to shift stocks from other retailers. But it paid off, as Wal-Mart’s market share in beef increased by 4 percentage points, Neal said.

The price premium for Choice grade widened to a record last month over Select in the wake of Wal-Mart’s move, according to Kevin Good, who tracks the beef market for researcher CattleFax in Centennial, Colorado.