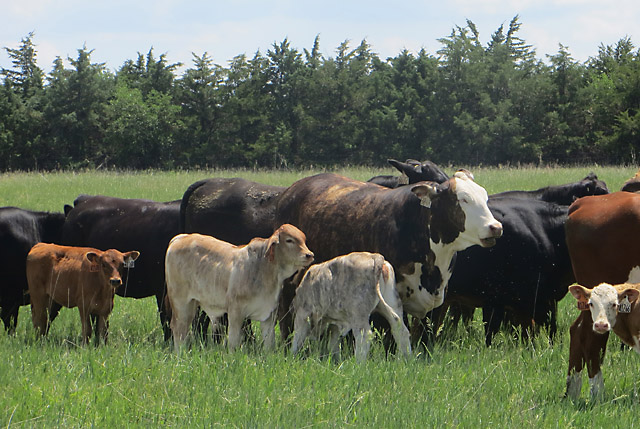 A research project from USDA looks at the genetics of 2,000 bulls from 16 different breeds.By: Sandra Avant, USDA Agricultural Research Service Information Staff
Breakthroughs in genetic research have made it possible to evaluate and routinely predict growth, calving ease, and other important, easily observable traits within beef cattle breeds. However, producers also want to be able to do the same for traits such as feed efficiency, disease resistance, meat tenderness, and reproduction, which are not easy to see or measure. These kinds of traits are typically too expensive and difficult for the cattle industry to study.

But that’s just the kind of research that Agricultural Research Service scientists are equipped to do.

For many years, scientists at the Roman L. Hruska U.S. Meat Animal Research Center (USMARC) in Clay Center, Nebraska, have evaluated thousands of cattle for traits that are economically important but difficult to measure, and they have genotyped more than 15,000 of these animals.

To help producers further improve their genetic evaluations, USMARC geneticist Mark Thallman and his colleagues started the “2,000 Bulls Project” in 2007. They collaborated with the largest U.S. cattle breed associations to collect genetic profiles of 2,000 bulls from 16 different breeds. Each of the 2,000 bulls was tested for approximately 50,000 genetic markers by use of the Illumina BovineSNP50 Beadchip. The markers genotyped by that chip were discovered from a number of sources, including the germplasm evaluation project and ARS research efforts conducted at USMARC and Beltsville, Maryland.

“The 2,000 Bulls Project provided a picture of the genomic composition of prominent sires in each breed,” Thallman says. “Although the project did not produce enough data to develop predictions for any individual breed, it did provide the first substantial set of high-density genotypes for each breed. Breeders have used this data as a starting point to incorporate genomic data into their breed improvement programs.”

The 2,000 Bulls Project and subsequent utilization by breed associations were limited to traits that are routinely measured. However, producers want help predicting the difficult-to-measure traits, too. For example, “while growth is a routine and easily measured trait, it is also related to increased feed consumption. From the producer’s standpoint, animal’s feed efficiency—how much feed results in a unit of growth—is more economically important,” says USMARC geneticist Larry Kuehn. “But individual feed intake is not practical to measure on large numbers of animals in an industry setting. Therefore, measurement of these traits in research herds, delivered to cattle breeders through genomic predictions, seems to be the most viable option for traits like feed efficiency.”

Scientists are now sequencing the genomes of the bulls that have the most descendants in the USMARC population. They are looking at sequence variations that can alter the expression and function of the genes and ultimately affect the traits influenced by those genes.

“We hope to use sequence variants to develop predictions that are more accurate across breeds and therefore more useful to the beef industry,” Kuehn says.

An Integrative Approach
Through research, published in the Journal of Animal Science, scientists learned that genotypes can predict performance reasonably well within breeds, but predictions based on crossbred phenotypes and genotypes do not predict performance of purebreds or unrelated crossbred cattle very well. Geneticist Warren Snelling is incorporating information about gene function and DNA sequence variation within genes to find genomic variation that predicts important traits consistently across many breeds. Integrating this information may enable more accurate predictions in broader industry populations from the USMARC data, especially for traits that are not usually measured on industry cattle.

“A lot of work has been done on biological pathways—what genes are involved in specific processes and how they interact,” Snelling says. “We’re trying to apply what has been learned from humans, mice, and other species to cattle, hoping this information will allow us to focus on important genes and ultimately enable accurate predictions of an animal’s future performance.”

Using this approach, Snelling identified genetic markers that were more predictive of meat tenderness than the markers contained on the Illumina BovineSNP50 beadchip. He first looked at the association between an animal’s genes and the tenderness of its meat. That data was then used to identify a set of genes related by function. He then merged the genetic markers associated with each trait with information about genes near those markers. This allowed him to identify pathways and genes that may affect tenderness.

The same method can be applied to feed efficiency, Snelling says.

Predicting Breed Composition
Another goal is to use genetic markers to manage cattle differently according to their genetic potential, a technique known as “marker assisted management.” For instance, feedlot operators could sort cattle by the predicted amount of time they need in the feedlot to reach a specific level of fat composition.

A major factor that can affect traits is breed composition—the percentage of genes an animal has from each breed in its pedigree. Breeds generally rank differently, on average, for a variety of economically important traits, such as growth, fat composition, and feed intake.

Knowing an animal’s breed composition could improve how it is managed in commercial production and allow it to be targeted to the most appropriate market.

“We’ve used our 50K beadchip data to accurately predict breed composition of cattle produced at USMARC,” Kuehn says. “Although this method is too costly to apply to commercial cattle at this time, it shows that predicting breed composition is possible, and it may be feasible in the future.”