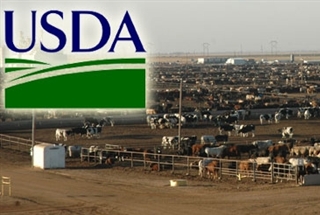 The milk production forecast for 2014 is increased from last month as growth in milk per cow has increased.  However, for 2015, the production forecast is lowered as the expansion in cow numbers and growth in milk per cow are expected to be more moderate.  Export forecasts for 2014 and 2015 are lowered as U.S. dairy products, especially on a skim solids basis, remain less competitive in world markets.

Cheese and nonfat dry milk (NDM) prices are raised for 2014, reflecting current price movements, but the price forecasts for 2015 are lowered as domestic supplies are expected to be relatively large.  Butter prices are reduced for both 2014 and 2015 based on prices to date and weaker expected exports.  Whey prices are unchanged from last month.  The Class III price for 2014 is raised on stronger cheese prices, but weaker cheese prices in 2015 result in a lower expected Class III price.  The Class IV price is lowered for 2014 as lower butter prices more than offset a higher NDM price.  For 2015 both butter and NDM prices will be weaker, resulting in a lower Class IV price forecast.  The all milk price is raised to $24.15 to $24.25 per cwt for 2014, but is lowered for 2015 to $18.85 to $19.75 per cwt.