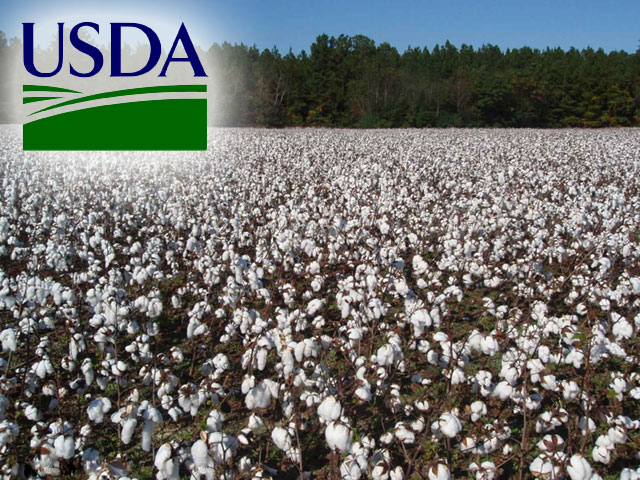 COTTON: This month’s 2015/16 U.S. cotton estimates include sharply lower supplies, disappearance, and ending stocks relative to last month.  Production for the 2015 crop is reduced 10 percent to 13.1 million bales, based on this season’s first production field survey, which indicates lower planted area, higher abandonment, and a lower average yield compared to last month’s expectations.  Beginning stocks are reduced 500,000 bales due to higher-than-expected 2014/15 exports; in addition, the 2014/15 ending stocks estimate includes a preliminary reduction based on reported stocks in public warehouses.  U.S. ending stocks for 2014/15 will be revised further as more data becomes available.  Domestic mill use for 2015/16 is reduced marginally, but exports are lowered 800,000 bales due to the lower production.  Ending stocks of 3.1 million bales would be 23 percent of total use.  The range for the marketing year average price is raised to 58 to 72 cents per pound, for a midpoint of 65 cents, which is up 3 cents from last month.

Projected 2015/16 world cotton stocks are reduced nearly 3 million bales this month, due mainly to lower estimated production in the world’s major cotton-producing countries.  In addition to the U.S. reduction, production is lowered 1.0 million bales in China based on lower reported area and extreme heat in Xinjiang, and 0.5 million bales in India based on lower-than-expected plantings to date.  Production is also reduced for Uzbekistan, but is raised for Brazil, Australia, and Pakistan.  World consumption and trade are raised, due to multiple, mostly offsetting, changes, the largest of which incorporates historical and current increases to imports and consumption for Bangladesh (see http://apps.fas.usda.gov/psdonline/circulars/cotton.pdf  for detailed explanations of revisions for Bangladesh and other countries).  World ending stocks are now projected at 105.2 million bales.