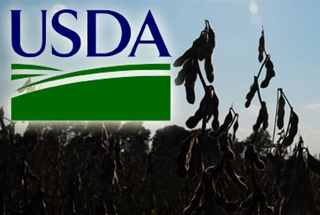 OILSEEDS:  U.S. oilseed production for 2014/15 is projected at 117.2 million tons, up 0.9 million from last month on increased soybean, peanut, and cottonseed production.  Soybean production is forecast at 3,958 million bushels, up 31 million on higher yields.  The soybean yield is projected at a record 47.5 bushels per acre, up 0.4 bushels mainly on gains for Iowa and South Dakota.  Soybean supplies for 2014/15 are projected 1 percent above the October forecast.

Soybean and soybean product prices for 2014/15 are unchanged from last month.  The U.S. season-average soybean price range is projected at $9.00 to $11.00 per bushel.  Soybean meal and soybean oil prices are projected at $330 to $370 per short ton and 34 to 38 cents per pound, respectively.

Global oilseed trade for 2014/15 is projected at 134.6 million tons, up 0.6 million from last month.  Increased soybean exports from the United States and Ukraine and increased rapeseed exports from Canada account for most of the change.  Global oilseed crush is projected higher mainly on gains for soybeans in the United States, China, Ukraine, and South Korea.  Partly offsetting is a reduction in soybean crush for Argentina.  Rapeseed crush is raised for EU and China.  Global oilseed ending stocks are projected lower at 103.0 million tons on reduced rapeseed stocks in Canada and Australia.