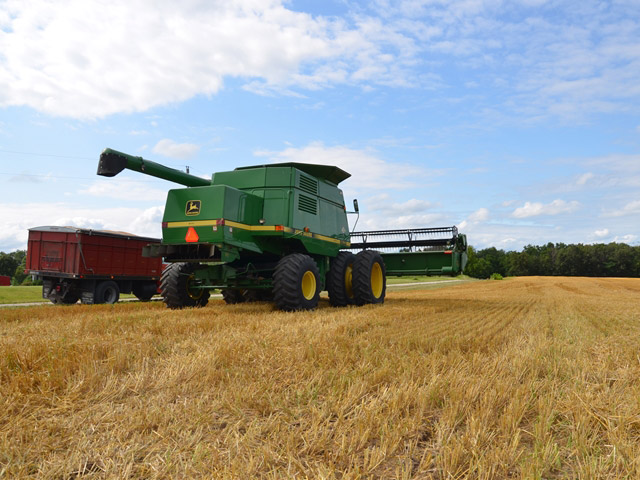 WHEAT: Projected U.S. wheat supplies for 2015/16 are lowered on a smaller crop and reduced imports.  An increase in spring wheat production is more than offset by decreases for Hard Red Winter, Soft Red Winter, and White Wheat.  Hard Red Spring wheat yields in North Dakota are forecast to be a record.  Projected imports are lowered 5 million bushels on the larger U.S. Hard Red Spring crop and lower Canadian production.  All wheat exports for 2015/16 are projected 25 million bushels lower at 925 million on a slow pace to date and increased foreign supplies.  Ending stocks are raised 8 million bushels to 850 million, the largest since 2010/11.  The season-average farm price is lowered 10 cents on the low end and 20 cents on the high end to $4.65 to $5.55 per bushel.

Global wheat supplies for 2015/16 are raised 2.2 million tons primarily on increased production in the FSU and Turkey.  A 2.4-million-ton reduction in global beginning stocks partially offsets the production increase; EU accounts for over 60 percent of the reduction.  World wheat production is projected at a record.  Crop conditions in the spring wheat areas of Russia and Kazakhstan continue to be excellent.  Winter wheat production in Russia and Ukraine is better than expected, particularly considering last autumn’s drought.  A 1-million-ton reduction for Canada, due to drought conditions in the western prairies, is partially offsetting.  Argentina production was lowered 0.4 million tons to 11.1 million.

World exports are lower with the biggest decreases for Canada (smaller crop), Argentina (smaller crop and lower carryin), and the United States.  Global imports are also down with the biggest changes being a 1-million-ton reduction for Iran offset by a 1-million-ton increase for Morocco.  Iran’s imports are reduced as a result of a newly imposed import duty and the Morocco change is from a Foreign Agricultural Service GAIN report.  Global use is up slightly, supported by increased feed and residual use for EU, Russia, and Ukraine.  With supplies growing faster than use, global ending stocks are raised 1.7 million tons to a record 221.5 million tons.