Watch Out for Corn Nematodes 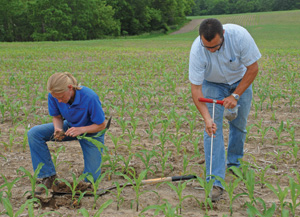 Watch Out for Corn Nematodes 1
( )

You can manage them, if you know what to look for

Drought across much of the Corn Belt in 2011 might have allowed nematodes to make a bigger-than-usual impact in some corn fields.

"Due to dry conditions, in spots where we knew nematodes were present, the damage was more visible than usual," says Farm Journal Field Agronomist Ken Ferrie. "Nematodes damage a plant’s root system and reduce its ability to respond to stress. So, instead of the usual 5 bu. to 10 bu. yield loss caused by nematodes, some fields suffered a 40 bu. to 50 bu. loss."

About 25 to 30 species of nematodes that feed on corn have been identified in Midwestern U.S. surveys, suggesting that the populations of such nematodes might be increasing, perhaps in
response to more continuous corn and reduced use of organophosphate and carbamate soil insecticides.

"In recent Illinois surveys, we found lesion nematodes in 80% of corn fields," says Ohio State University plant pathologist Terry Niblack (formerly with the University of Illinois). "About two-thirds were at population densities that would be considered harmful."

Not everyone agrees on how serious a threat nematodes pose to corn growers. However, pest authorities do agree that if nematodes are a problem in your fields, they can be managed.
Control measures, they add, must be tailored to your soils, crops and nematode species and grounded on advice from local experts.

But Iowa State University nematologist Greg Tylka believes the most severe losses are limited to isolated areas, when nematode feeding is compounded by other stresses such as drought or soil compaction. An exception involves sting and needle nematodes, which occur only in soils with at least 70% sand and almost always cause yield loss.

Bauer, who says she finds nematode damage (often misdiagnosed as something else, such as herbicide injury) on many field calls, is more concerned. "Even if you don’t farm sandy soil, there are other species, such as lesion and dagger nematodes, which can reduce yield," she says.

Bauer works in southern Michigan, northeastern Indiana and northern Ohio. Tylka emphasizes that his observations are limited to Iowa—and he notes that his predecessor, Don Norton, did document corn yield losses from nematodes present in loam and silt loam soils.

"Because there are so many species, and so many conditions, which affect the species in various ways, nematode biology and management is much more localized than most other aspects of crop production," Tylka explains. "Any measures a farmer takes must be based on advice from local experts."

Southern nematodes. For Southern corn growers, the nematode situation differs from the Midwest because of different weather, soils and nematode species, says University of Arkansas nematologist Terry Kirkpatrick. In many areas, nematode species and populations are changing, in response to an increase in the amount of corn acreage in recent years.

"In the Southeast, where there is more sandy soil, and more hot, dry weather, nematicides produce a yield response pretty consistently in corn," Kirkpatrick says. "We don’t see as much response in the mid-South, where we have more silt loam soils.

"However, in the mid-South, we are seeing corn nematode populations increase, due to the increase in corn acres. I’m not sure if a problem simply hasn’t developed yet or if mid-South soils and environment are less stressful," he says.

Except for very sandy soils, Tylka believes, treatment isn’t warranted unless problems are observed. "In five research experiments in Iowa in 2011, I found no benefit from any seed treatment or soil-applied nematicide," he says. "But every field in which we conducted the experiment had low populations of nematodes that feed on corn. I don’t think most Iowa fields are at serious risk for substantial yield loss in most growing seasons.

"However, if you do have problems, planter-box seed treatments and soil insecticides with nematicide properties [Counter is the only one labeled for nematode control] might boost yield significantly."

Tylka advises farmers to have their soil analyzed only when they suspect nematode damage in corn. Bauer believes sampling all fields and soil types could be a sound investment. It will establish baseline levels that can help you decide whether a nematicide treatment will pay in the future.

In the South, where corn is a new crop in many fields, and short winters and long, hot summers are conducive to nematodes, "sampling soil for corn nematodes every few years is good business," Kirkpatrick says. "You need to know what species are in your fields and monitor the populations."

When you scout, look for damage in circular areas or patches within a field, Bauer advises. Plants that are stunted by nematodes might appear to be suffering from a nutrient deficiency because the damaged roots can’t take up nutrients.

"Compare roots from a possible nematode hot spot to the roots of normal plants," Bauer continues. "Damaged roots may have a stopped-off or club-shaped appearance, and the tips may turn brown and stop growing. There may also be a noticeable lack of root hairs."

"The most common type of damage I see is root rotting," Niblack says. "It is caused by fungi entering the roots through holes made by nematodes."

"If corn is in the rapid growth stage, the damage may increase dramatically over a few days," Bauer explains. "If you suspect nematode damage, have your soil and roots tested by a diagnostic laboratory."

Pulling soil samples that will yield useful nematode data is an exacting procedure, Bauer points out, so check first with your laboratory or Extension specialist for instructions.

If you think nematodes might be reducing corn yield, another option is to run strip trials of nematicides across your field, Tylka says. Harvest them with a calibrated yield monitor or a weigh wagon.

Rotating to a nonhost crop can reduce populations of needle, sting and some species of root-lesion nematodes. "All the other nematodes that feed on corn can also feed on many other crops," Tylka says.

In the South, where volunteer corn can grow for 60 or 70 days after harvest and corn might be planted again as early as March, it might be wise to control volunteer corn plants by tilling or spraying herbicides, Kirkpatrick says (remember that many hybrids are glyphosate-resistant). That will prevent the plants from increasing nematode populations for an additional two or three months.

The localized nature of nematode issues points at the need for more research on nematodes and their effect on corn, Tylka says. Little research has been conducted for decades because of lack of funding.

"None of these nematodes feed exclusively on corn," Tylka continues. "Rather, they can feed on many other crop plants and also on weeds. You must know the species and populations in your own fields if you feel you need to implement a control strategy."

There are many types of nematodes that prey on various plants. Where corn is concerned, here are the yield-risk levels for some of the more troublesome nematodes, according to Farm Journal Associate Field Agronomist Missy Bauer:

View from the Laboratory

"As a nematologist, I’d love to say nematodes are a major problem in corn," says Fred Warner, with a wry grin. "After all, crises drive funding and sample volume."

Warner is a nematode diagnostician in the diagnostic laboratory operated by Michigan State University’s (MSU) Department of Plant Pathology. Turning serious, he continues: "We’ve speculated for some years that nematode issues will be on the rise in corn. But will we see extensive damage? I’d say the jury is still out."

While some surveys have documented increasing populations of nematodes that prey on corn, about 50 samples submitted this past summer to the MSU Extension Diagnostic Services laboratory where Warner works showed that only 10% of the fields had moderate to high population densities.

There’s much we still need to learn about nematodes, Warner says. "For example, nematode densities were very high on some golf courses last summer—often the same types that feed on corn. But we did not find high population densities in corn. We don’t know why. Of course, there are a lot of differences between corn and turf management."

At this stage, corn producers need to keep an eye on nematodes, Warner says. "If you think you have a problem, you can run some strip trials of a nematicide or a soil insecticide with nematicide properties," he says. "Remember to leave check strips.