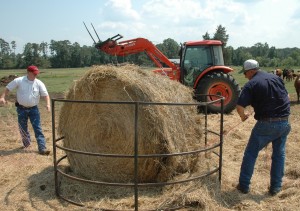 With the ongoing drought, livestock producers throughout the state continued to cull herds or liquidate them entirely, according to reports from Texas AgriLife Extension Service personnel.

Hay stocks were dwindling across the state, though the reports from some areas, such as East Texas and the Coastal Bend, seemed direr than others.
“As we go another week without any measurable rains and above normal temperatures, forage conditions continue to deteriorate under normal grazing pressure,” said Lee Dudley, AgriLife Extension agent for Panola County, east of Tyler. “Many producers have already culled once and are now looking to cull deeper into their herds as they are running out of standing grass.”
“We are in an extreme drought throughout most of the county,” said Clint Perkins, AgriLife Extension agent for Wood County, about 100 miles east of Dallas.
“Pastures and hay meadows are in bad condition. Feed prices for dairy producers are on the increase. Producers are talking about a serious cull of herd size if rainfall does not come.”
“Time is running out for larger producers to produce enough hay to meet their needs if rains don’t come soon,” said Mark Currie, AgriLife Extension agent for Polk County, east of Huntsville. “Hay purchases will likely be very costly with a high trucking bill, which will force increased culling of herds.”
“Karnes County has moved into Stage 4 drought and desperately needs moisture,” said J.D. Folbre, AgriLife Extension agent for Karnes County, southeast of San Antonio. “Sorghum and cotton crops still have a chance if moderate rainfall is received. The hay crop looks like it will be 60 percent to 70 percent of normal.”
“Ranchers are being forced to sell off cattle or invest in more acreage for grazing,” said Ryan Martin, AgriLife Extension agent for Motley County, northeast of Lubbock . “With no grazing, no hay supply and supplemental feed prices rising, ranchers have no choice but to sell off or downsize their herds. Residents are saying this is the worst drought they have ever been through.”
Greg Jones, AgriLife Extension agent for Garza County, southeast of Lubbock, said producers in his area are “pretty well stocked for drought conditions because they happen regularly in our area.”
Still, Garza County ranchers are actively culling. Jones recently held a meeting to assist ranchers in reducing herd numbers, adjusting stocking rates and alternative feeding programs during drought.
“Most of them have dealt with this before,” Jones said. “It’s just a little longer and more drawn out this time.”
More information on the current Texas drought and wildfire alerts can be found on the AgriLife Extension Agricultural Drought Task Force website athttp://agrilife.tamu.edu/drought/.