We May Not Have an Aging Farmer Problem After All

By Todd Kuethe, Department of Agricultural and Consumer Economics, University of Illinois

Many industry observers often express concern related to the "aging farmer problem." For example, the average age of Illinois' farm operators has increased steadily over time, with the mean age of principal farm operators in the state of 57.8 years in 2012, compared to 53.2 in 1997.

This article examines the age distribution of Illinois' principal farm operators using data collected through USDA's Census of Agriculture. A closer look at the data reveals that the "aging farmer problem" may be overstated by some.

According the Census of Agriculture, Illinois was home to 75,087 farms in 2012. Figure 1 (click here to see this graphic) shows the distribution of Illinois farms by the age of the principal operator using predefined Census categories. It can be seen that a large proportion, 31.6%, of principal operators are 65 or older. This statistic can be alarming because these farmers are beyond what was once considered the traditional age of retirement. 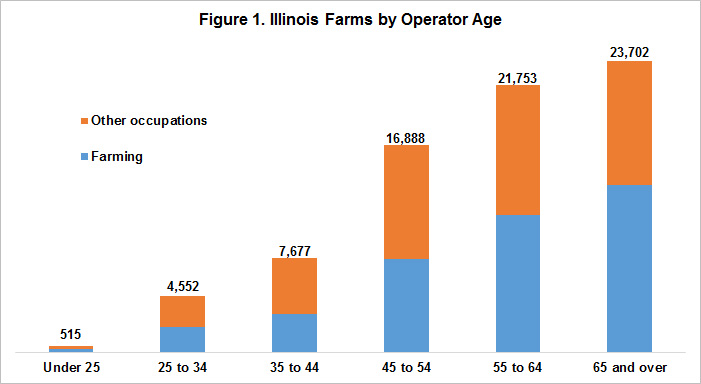 As we have seen previously, the distribution of farms alone, however, can sometimes provide an inaccurate representation of the population of Illinois farms (farmdoc daily, July 30, 2014). For example, the chart featured above plots the distribution of Illinois farms, farm acreage, and income (including both market income and government payments) by the age of the principal farm operator.

The figure shows that while 31.6% of Illinois' farms have a principal operator age 65 or older, this age group represents a relatively smaller share of total farm acreage (24.6%) and farm income (21.5%). This observation is contrasted by farmers between the ages 35 and 54. Farmers between 35 and 54 represent a similar share of farm numbers at 32.7% but account for a much larger share of acreage (37%) and income (38.6%). 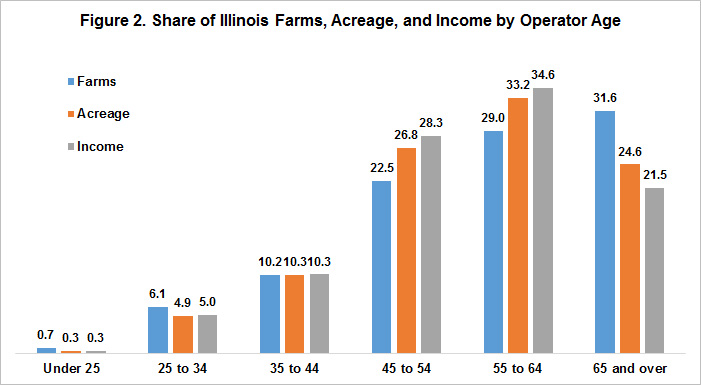 Thus, while the distribution of farm numbers paints an alarming picture of the age of Illinois' farm sector, the distribution of farm income is much closer to what one would expect of most small businesses. The largest share of the income of the sector is captured managers between the age of 45 and 64. Just over half of Illinois' primary farm operators are between ages 45 and 64 (51.5%). This group, however, represents 60% of Illinois' agricultural land and 62.9% of the state's farm income.

It is also important to note that the U.S. labor force, overall, is also aging. Zulauf (2013) uses data from previous Censuses of Agriculture as well as data from the Bureau of Labor Statistics to show farm population aging mirrors that of the broader labor force.

Note: The Census defines a farm as any place from which $1,000 or more of agricultural products were produced and sold, or normally would have been sold, during the reference year, and this definition has been used since 1974. In addition, it is important to note that many of the statistics collected by the Census address the characteristics of the farm's principal operator (and his or her household), and as a result, the demographics of others employed by farms can be difficult to observe directly through the Census.

Pro Farmer's First Thing Today: Airline Layoffs, Dicamba Decisions and More
Election 2020: Who Should Ag Choose?
Op-Ed: Let’s Build Agriculture Back Better Together
Playing the disrupter once again
Op-Ed: why Would American Ag Ever Go Back?