Weed Out Hunger With Technology 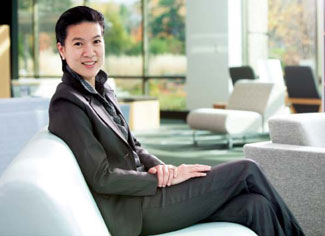 Ponsi Trivisvavet might reside in Minnesota, but she lives in the world of global agriculture. Born in Thailand and raised there and in Los Angeles, she earned an undergraduate degree in electrical engineering from Chulalongkorn University and a master’s in business administration from Cornell University. She holds dual citizenship in the U.S. and Thailand and has lived in more places than most will ever visit, such as Switzerland, South Africa and, most recently, Singapore.

It gives her a global perspective into agriculture’s challenges and opportunities as she steps into her newest role at Syngenta AG, a Swiss plant-science company with $14.7 billion in sales in 2013. Since July, Trivisvavet has been the company’s region director for North America and president of Syngenta Seeds. The promotion brings her to Minnetonka, Minn. Are Trivisvavet, her husband and their 10-year-old son ready for the bitter chill of their first Minnesota winter? Maybe—and maybe not.  “I told my son it was just like Switzerland,” says Trivisvavet, smiling.

She sees her role as improving and expanding seed and crop protection technology available to American farmers. She points to southeast Asia, where she says farmers, public officials and the public are increasingly accepting of genetically modified seed. “The rate of technology adoption in Southeast Asia is much faster,” Trivisvavet notes.

What makes the conversation about seed and crop production technology so different—and less heated—in southeast Asia compared to the U.S.? One factor is that the threat of hunger is more real in places such as Vietnam and the Philippines, explains Trivisvavet, who once worked on food security issues for consulting firm McKinsey. “Food security is closer to their heart,” she says. “When you actually see starving in your own country, you react faster. You adopt technology faster, and people’s voices are united because the starving is next door.”