What a 110,000-acre Wildfire Looks Like from the Fire Line 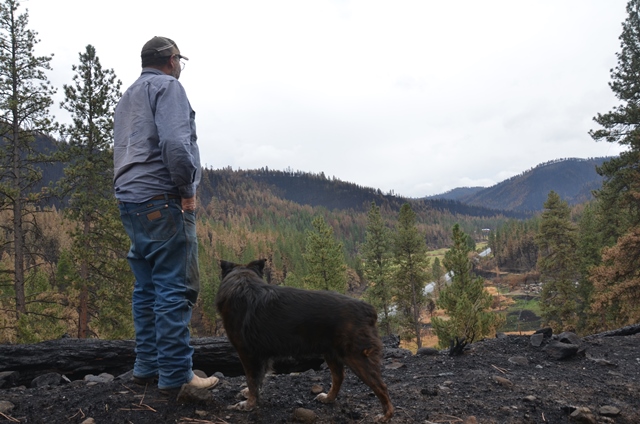 Fire can be an excellent management tool for a rancher or it can be devastating to their livelihood. For hundreds of ranchers in the West this year has been one that will live in infamy caused by a string of massive wildfires.

One of the worst has been the Canyon Creek Complex wildfire. It has burnt 110,406-acres of forest and pasture across central Oregon. The blaze has affected several area ranchers including Ken Holliday who was less than two weeks into grazing his allotments before he had no choice but to drive through flames to open gates and save his cowherd.

The wildfire started when lighting struck on Aug. 12 near one of Ken's grazing allotments he leases from the U.S. Forest Service. The next day Ken drove his side-by-side to through the fire opening gates allowing his cows to escape. At one point the back tire on the side-by-side caught on fire and had to be put out with an extinguisher.

Ken owns the Holliday Ranch with his two older brothers and they run 1,800 cows total. 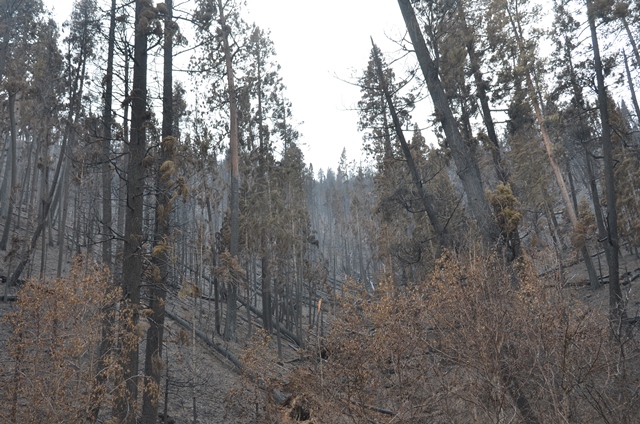 Ken describes the forest as being "nuked" by the wildfire, "it is completely gone." The fire went through or was near several allotments Holliday's family grazes 750 cows on from the start of August until late October. At one point the fire covered nearly 10 miles in two hours when it burnt through Ken's forest pastures to the edge of Canyon City. 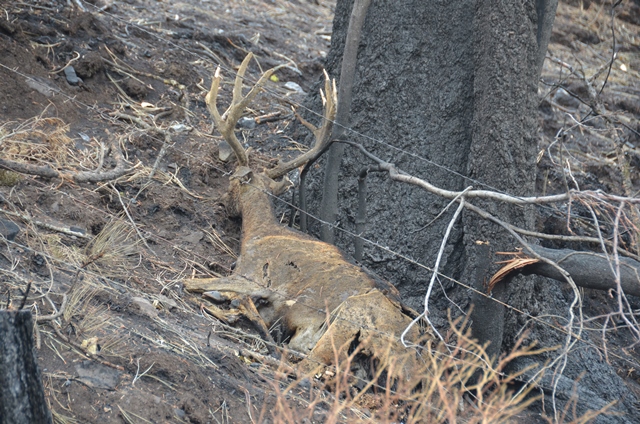 While it has not been determined what the livestock losses have been, a number of wildlife certainly perished because of the flames. This mule deer near the highway likely died from smoke inhalation before the fire reached the buck. 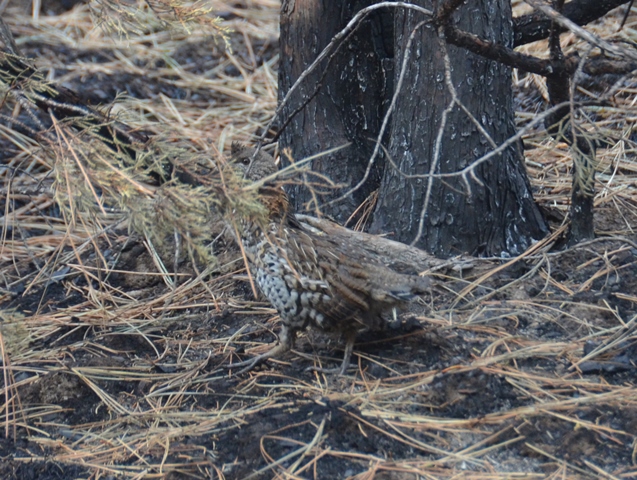 A ruffed grouse tries to find cover, but the scorched landscape yields little. Many trees are completely bare without a needle to show. Millions of feet of timber have been lost to the inferno. 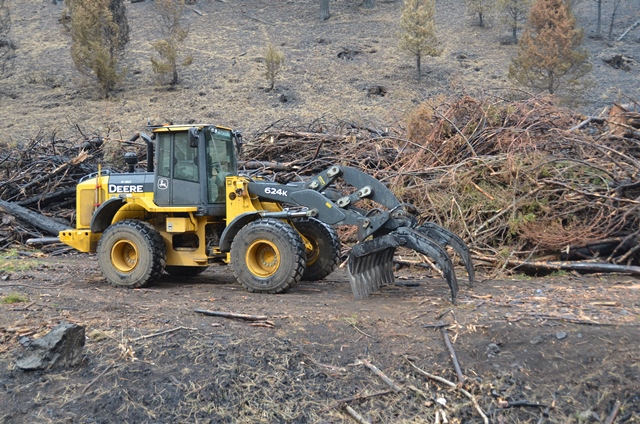 The highway department has been busy clearing roads of fallen trees. 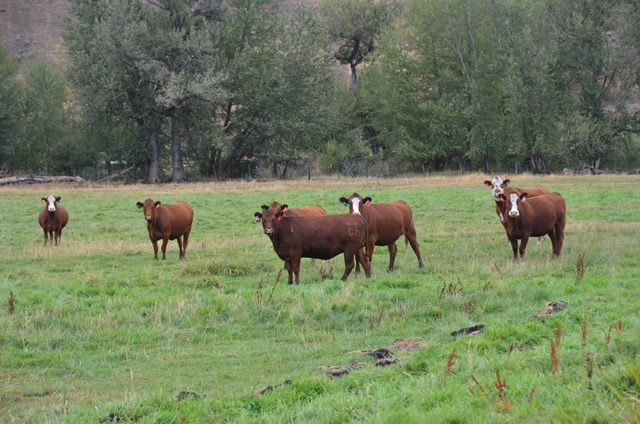 These cows belonging to Ken Holliday were part of a group of 12 cows and a bull that were trapped by fire. They're now grazing in a trap near the ranch headquarters. 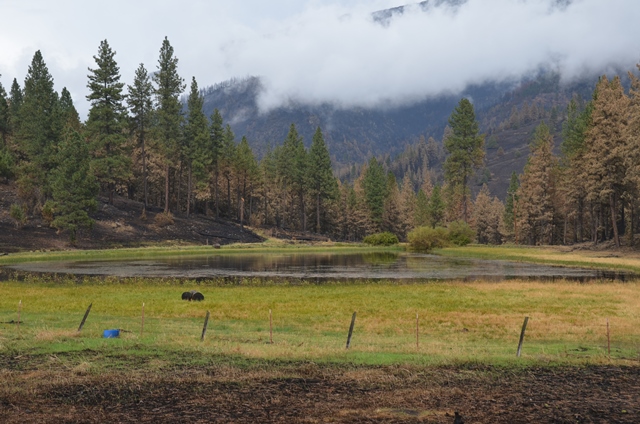 Fortunately, Holliday believes the group of 13 cattle were able to seek refuge at a stock pond surrounded by green grass. Several of the cows had hair singed by fire. Three of the cows looked like their eyes had been scorched similar to staring at a welder. Only one cow had a burnt hoof from the fire. The small group certainly was a lucky 13 to make it out alive and they're all in great condition now. 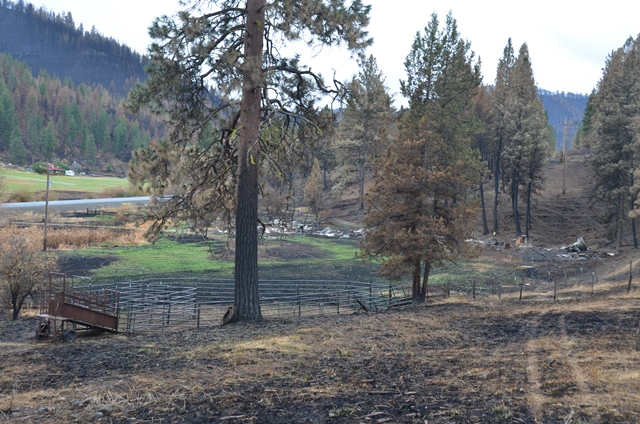 The 13 cattle trapped by flames were gathered the next day into the set of panels in the foreground. In the background a home and out buildings have been burnt to the ground. In all, 43 houses were lost to the fire. The sound of the fire was like locomotive as it went through the canyon.

At one point a shed with a brand new ATV caught on fire. The flames were hot enough to melt the aluminum wheels. Aluminum melts at 1,221°F. 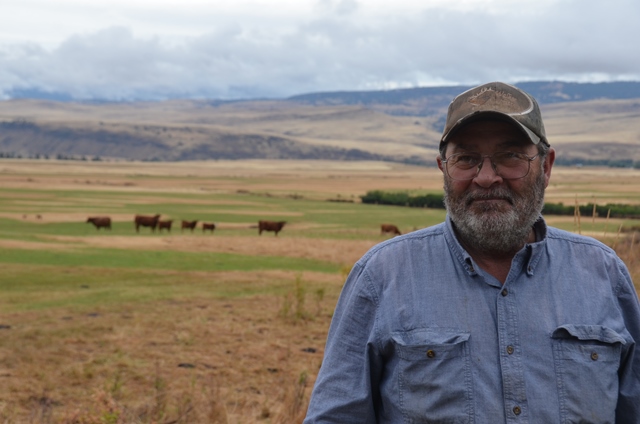 The Canyon Creek Complex fire has engulfed approximately half of Ken Holliday's grazing allotments. Now, a large portion of his cow herd are grazing on family pastures at the Holliday Ranch headquarters near John Day. The Holliday's own 32,000 acres to go with the grazing permits and operate a small feedlot to background their steers in before sending to a final feedlot. 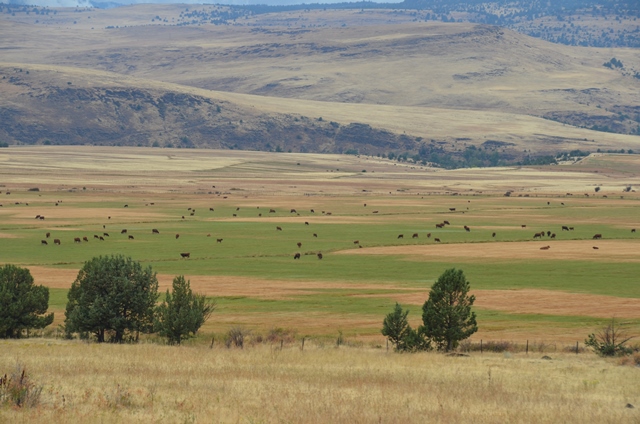 The commercial Red Angus and Hereford cowherd is now grazing hay meadows in the valley where they would be wintering on in late October. These cows were moved four different times to avoid fires before making it to these meadows. They'll start calving at the end of February. 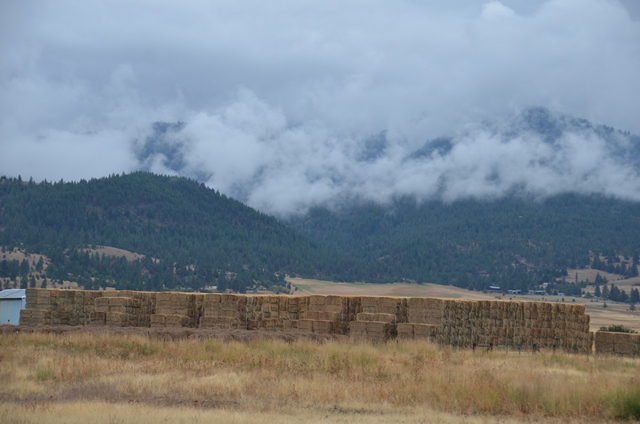 Ken was able to put up quite a bit of hay. Right now his bunker silo has 1,000 tons of haylage. He'll need all of the forage he can get to help compensate for what was lost on the grazing allotments. 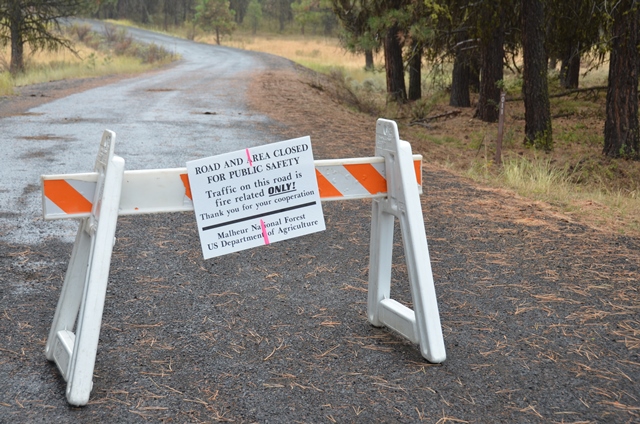 Roads all around the Malheur National Forest were closed from traffic while the fire still rages. 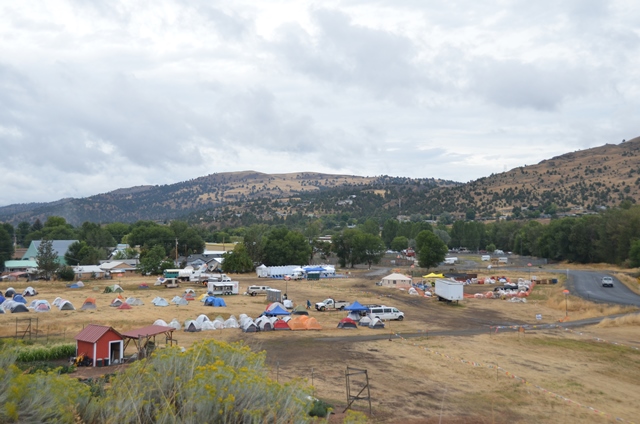 A camp of nearly 1,000 firefighters could be found at the Grant County Fairgrounds. Even more tents were around the show barns. 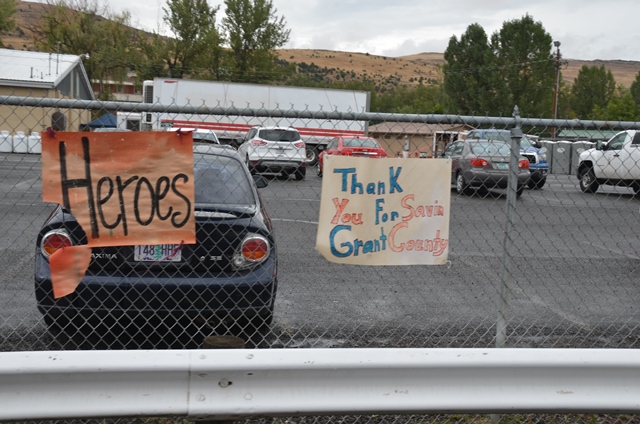 The efforts of the firefighters hasn't gone unnoticed with residents of John Day and surrounding Grant County hanging signs thanking the heroes who battle the flames. Firefighters have come from as far away as Colorado and government personnel from Michigan. 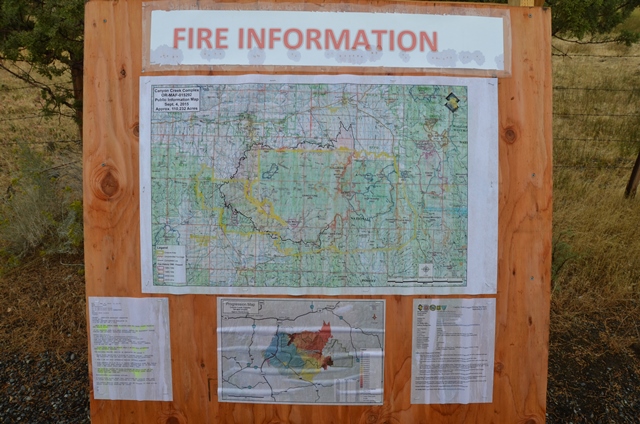 These rain soaked maps show the devastation caused by the fire and updated information about the effort to put out the Canyon Creek Complex. 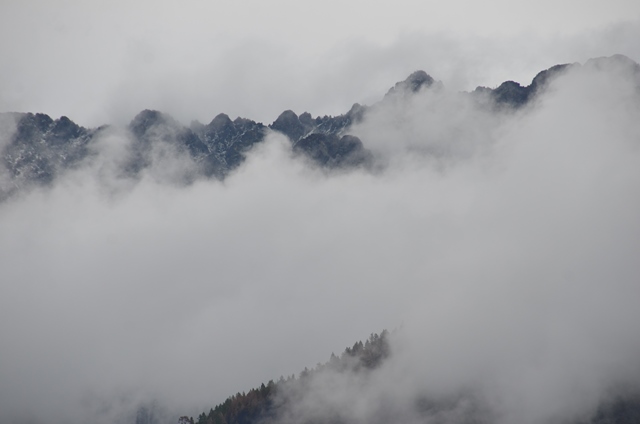 Snow fell on top of the Strawberry Mountains last Friday, Sept.  4, a sign that wildfire season may be coming to an end. Central Oregon received a good rain that same day helping bring much needed moisture to the smoldered terrain. 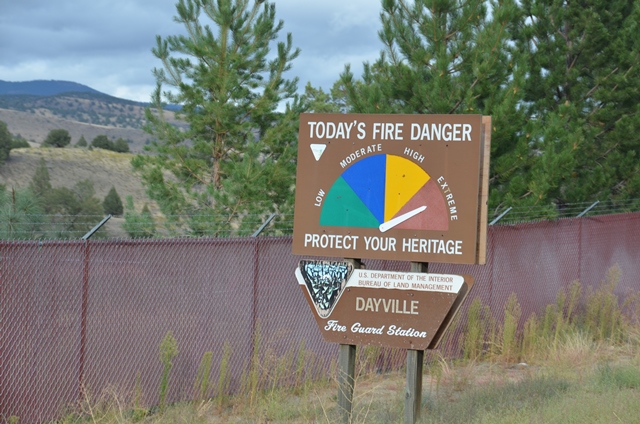 Currently, the Canyon Creek Complex is 87 percent contained, but fire is still an "extreme danger" in Oregon. Drought caused by a light winter snow pack and little rain has left much of the forest and pastureland dry, and ready burn with just a spark. 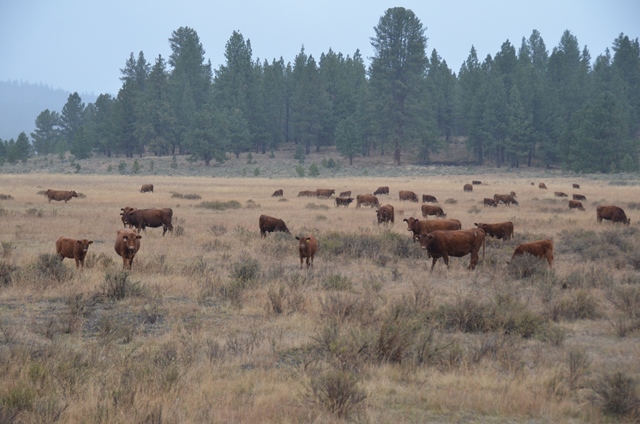 These are more of Holliday's cows that are just a few miles to the southwest of where the fire started. The cows are grazing on pasture land known as Bear Valley.

Ken estimates his brother Ron had 20 percent of his allotments affected, while his other brother Darrel lost 90 percent of his grazing. While no dead cattle have been found Darrel was still short 19 head on Sept. 4.

It may be two years before Ken and his brothers can graze their cows on the land they have permitted to them by the Forest Service and the Bureau of Land Management that was affected by the fire. On top of that Ken estimates 26 miles of fence has been destroyed on those public lands. 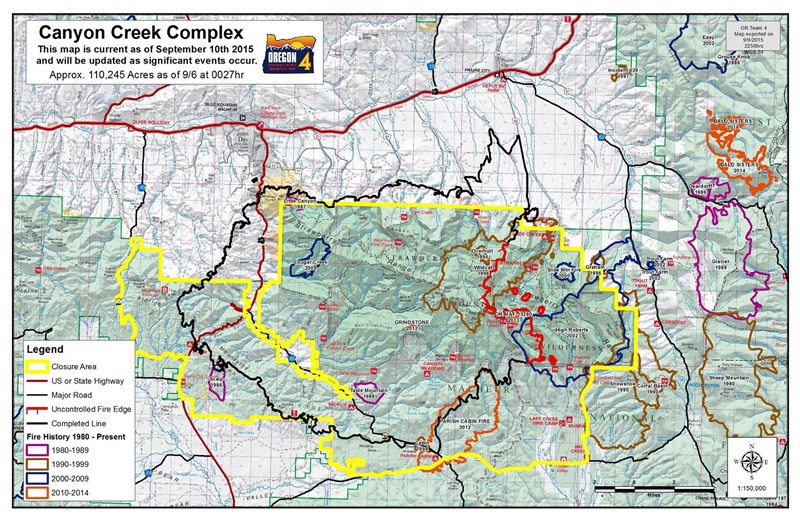 The map shows how much area the fire has covered with a black line tracing through the center and the red line shows the fires uncontrolled edge. The Canyon Creek Complex fire has burned nearly as much acreage as all of the wildfires near John Day since 1980 combined.

It is projected the wildfire will be completely contained by Sept. 20.