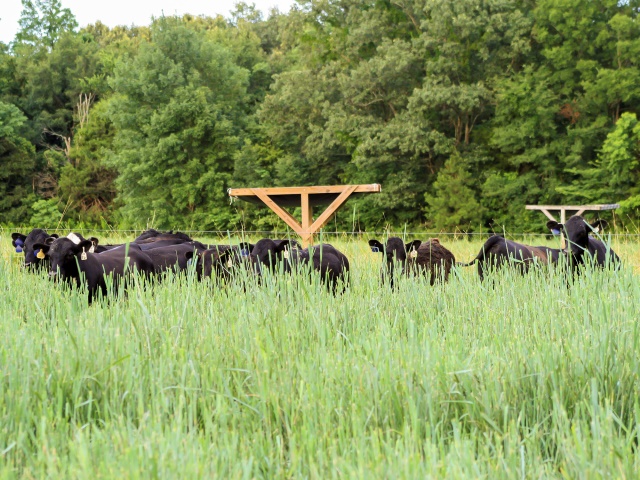 The old adage “the grass is always greener on the other side of the fence” may have a new twist when it comes to cattle forages.

As consumer interest in forage-finished beef increases in the United States, scientists in the Mississippi Agricultural and Forestry Experiment Station at Mississippi State University are studying different forages and their effects on beef quality and taste. Findings from two studies provides valuable information for potentially alternate feeding practices for stocker cattle while also benefitting bobwhite quail and other ground-nesting birds.

“Consumers are interested in forage-raised beef as a leaner, healthier option, and producers are looking for the best forages for their cattle,” said Wes Schilling, a professor in the MSU Department of Food Science, Nutrition and Health Promotion and food scientist with the Experiment Station. “In these studies, we wanted to determine the quality of beef from cattle that foraged on native grasses and bermudagrass.”

Bermudagrass is one of the most common warm-season grasses used to graze cattle in the South because of its large biomass production and forage quality. However, this introduced grass provides few benefits to wildlife compared with native, warm-season grasses, such as Indiangrass and bluestem. These grasses provide superior wildlife habitat, but little is known about the quality of beef from cattle that graze on native forages.

“In both studies, we found that native, warm-season grasses are acceptable forage for beef cattle during the stocker phase, producing a lean, high-protein product with positive consumer acceptability,” Schilling said.

Since native, warm-season grasses perform well in the southeastern United States, are drought tolerant and provide excellent wildlife habitat for bobwhite quail and other ground-nesting birds, farmers could consider these grasses as forages for their cattle.

Nearly 85 percent of beef cattle in the U.S. are fed on grass in the stocker phase and then finished on grain, which shortens the time to market. However, increased grain prices, coupled with consumer demand, have triggered the need for alternative feed sources to reduce feeding costs.

In one study, researchers randomly assigned 72 steers to nine pasture plots with three different forage treatments, including bermudagrass, Indiangrass and a mix of native, warm-season grasses (Indiangrass, big bluestem, and little bluestem). Cattle were then forage-finished on tall fescue until marketed.

“Cattle about 6 to 7 months old grazed on these forages until winter and then were fed sudangrass hay/roughage and supplement during the winter,” Schilling said. “Cattle grazed on tall fescue the following spring and summer until they reached the target harvest weight.”

Byron Williams, an associate research and Extension professor in the Department of Food Science, Nutrition and Health Promotion, said the researchers trained eight panelists to evaluate steaks based on aroma, flavor intensity and various other factors according to standards established by the American Meat Science Association.

“Our trained panelists evaluated grass-finished rib steaks and grain-finished strip loin steaks from the respective projects during training sessions and then during the actual sensory studies,” Williams said.

In a similar study that evaluated grain-finished cattle, there was a large difference in fat percentage and only a slight difference in moisture percentage, Williams added. Also in the grain-finished beef study, steaks from the bermudagrass treatment had greater fat content and lower protein and moisture percentages, compared with steaks from cattle fed the Indiangrass and mixed native, warm-season grasses.