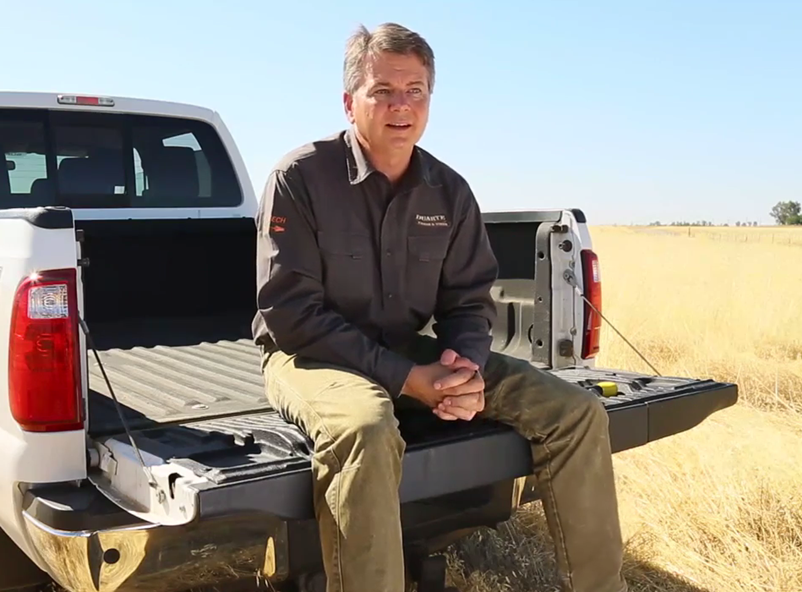 When John Duarte plowed 4" to 7" deep, he was accused of deep ripping and threatened with fines and potential imprisonment.
( Duarte Nursery )

With the crank of a Case IH Quadtrac, John Duarte unwittingly poked leviathan and unleashed the highest levels of government regulation on his farmland. The annals of bureaucratic overreach are packed with stories of draconian intervention on U.S. farms … and then there is the Duarte account. The case should have been a standard off-the-radar, bull-rush government victory, but for one inconvenient snag: Duarte punched back.

Locked in a cage match with the Army Corps of Engineers and Department of Justice (DOJ), Duarte has been found liable of breaching the Clean Water Act (CWA). His crime? Plowing 450 acres of farmland. His penalty? Potentially millions in fines. If Duarte ultimately loses in court, his fall will affect the property rights of landowners and farmers across the U.S.

Duarte, 50, is a fourth-generation producer and president of Duarte Nursery, located on the west side of the Sacramento Valley. The Modesto, Calif.-based nursery sells rootstock (almonds, avocadoes, grapes, pistachios and grapes) to farmer-customers across the West Coast. In 2012, Duarte bought 450 acres of cobbly, red clay ground for investment and potential future orchard development. The fields had been in wheat during the 1970s and 1980s, followed by cattle grazing in the 1990s and early 2000s.

Biologists surveyed the ground and mapped out wetlands, composed of vernal pools, for Duarte. The pools form after rains in the low field pockets, typically several inches deep and one-hundredth of an acre in size, and last several weeks before drying.

In December 2012, Duarte hired a local operator at $50 per acre to till the ground with a Case Quadtrac and Wilcox ripper. “We wanted the dirt opened down to several inches, but no deep ripping,” Duarte says. “Anyhow, nobody gets much tillage for $50 an acre in California.”

Rolling down Rawson Road, Corps field agent Matthew Kelly pulled onto the shoulder when he spotted the Quadtrac sitting in Duarte’s fields. Camera in hand, Kelly put the lens’ crosshairs on the Quadtrac and triggered an advance of Corps control over Duarte’s future.

“About two weeks later, Matthew Kelly called me and said, ‘You’re deep ripping vernal pools.’ One, I told him we were not deep ripping. Two, I told him the driver was going around the vernal pools, which I had instructed be done. I offered to meet on site and show him, but he turned me down,” Duarte says.

Duarte heard no more from the Corps as spring approached, but several months of silence were merely a prelude as the regulatory machine warmed. In late February, certified mail from the Corps arrived on the doorstep of Duarte Nursery at 1555 Baldwin Road. When Duarte opened the envelope and removed a cease and desist order (CDO), the gravity of his alleged offense was clear in the first line: “This letter concerns your unauthorized work in waters of the United States.”

The letter accused Duarte of discharging “dredged or fill material into seasonal wetlands” without a permit. He was ordered to “cease and desist” under threat of potential fines and imprisonment. Duarte Nursery sent a detailed response denying any CWA violation, demanded the information on which the Corps based its determination and asked for a hearing. (Corps officials declined comment due to pending litigation.)

The Corps sent Duarte an outdated wetlands map of the property along with an assertion saying Duarte had “deep ripped” the property, but otherwise the agency essentially remained silent for several months without giving Duarte Nursery a hearing regarding the CDO. Following the Corps’ refusal to release the CDO information and denial of a hearing, Duarte Nursery filed a due process lawsuit in U.S. District Court in October 2013.

The Corps sought dismissal multiple times, asserting the CDO was not a direct order, but merely a suggestion. Despite spending $50,000 in planting costs and abandoning a future harvest, the Corps argued Duarte had stopped farming by his own volition. The presiding judge denied dismissal and compared the Corp’s CDO actions to holding a gun against Duarte’s head and then asserting Duarte should have realized the gun was empty.

By May 2014, the government was prepared to bring Duarte to heel, and the DOJ charged him with destruction of wetlands and violation of the CWA. “The Corps first took my case to Gina McCarthy’s EPA and they declined to prosecute,” Duarte contends. “The EPA wanted no part of it and that’s very telling. So the Corps next took it to DOJ and they hopped on board.” (EPA and DOJ officials declined comment due to pending litigation.)

Plowing is not regulated by the CWA according to agency regulations, but the government refused to concede Duarte’s tillage was plowing or that it was for the purpose of planting wheat. The government also argued the tillage didn’t merit an exemption for “normal farming practices” because his farmland wasn’t “part of an ongoing farming operation.” (Actual CWA text mentions nothing about “ongoing farming.”) Twenty years of wheat production followed by 15 years of livestock production wasn’t a continuous farming operation, according to DOJ.

DOJ also sent an evidentiary team equipped with a backhoe to Duarte’s property (on ground the government deemed too sensitive to plow) and dug up roughly 20 vernal pools to a depth of 2’ and 3’ down, piled the dirt back and left after 13 days. The DOJ disturbance was far deeper than Duarte’s tillage. “They literally dug a bunch of pits in the same wetlands they accused me of destroying by plowing them a few inches,” he says.

The Corps originally told DOJ Duarte had ripped down to 36” deep. However, the final DOJ report admitted tillage was 4” to 7” deep, which matched Duarte’s claims from the beginning of the conflict.

Yet, tillage depth was secondary evidence compared to the government’s jewel in the crown: mini mountains. Duarte’s 5” tall furrows were labeled “small mountain ranges” that had converted the wetlands into dry land. “I couldn’t believe what they were saying. No farm in the U.S. is safe if the government can get away with these kinds of claims,” Duarte says.

The DOJ’s benchmark prosecution of Duarte upends the understanding of plowing, other normal farming practices, CWA interpretation and private ownership. “This represents an effort by the Corps and career attorneys at the DOJ to do one thing: erode CWA protections for farming,” says Anthony Francois, Duarte’s attorney with the Pacific Legal Foundation (PLF). “If CWA protections don’t apply to farming in this case, they can be taken away in any case”

Duarte knew he was in for a lengthy court battle and faced millions of dollars in penalties for less than 1’ of tillage on 450 acres that had been plowed countless times in the past. On June 10, 2016, in U.S. District Court, Judge Kimberly Mueller accepted the government’s argument that Duarte was liable for plowing his farmland without a permit from the Corps. According to Judge Mueller, Duarte’s plowing caused “the material in this case soil, to move horizontally, creating furrows and ridges.”

The court ruled Duarte’s plowing implement was a point source under the CWA: “The equipment loosened and moved the soil horizontally, pulling the dirt out of the wetlands…”

Boiled down, Judge Mueller agreed with the Corps that because Duarte chiseled a few inches into the ground and moved dirt within a vernal puddle, he was liable for discharging dredged and fill material.

“This case is nuts,” says Washington, D.C., attorney Gary Baise with OFW Law. “Are you kidding? Creating ridges in a farm field is an addition of a pollutant to the waters of the United States?”

In March 2017, Mueller declined to pass the case to an appellate court and announced procession into the penalty phase. In August 2017, DOJ litigators are scheduled to ask Duarte be ordered to pay almost $3 million in cash, plus spend millions more on wetland “mitigation credits.”

As of March 2017, Duarte has spent $1.6 million in litigation and started a GoFundMe account (Duartestandsup) to alleviate expenses. The U.S. government has spent close to (if not more than) $1 million in taxpayer money in pursuit of Duarte, according to the PLF. Duarte faces up to $8 million in fines between the main penalty and wetland restoration credits. “The DOJ didn’t come up with $8 million so it could be used to heal my dirt. They looked at my nursery and personal finances to make sure the penalties would crush me,” he says.

Francois sends out a clear warning to farmers: “Just because an adviser says you’re using normal farming practices according to the CWA doesn’t mean the Corps agrees. When the Corps has no standard for what a normal practice is, anyone can be subject to the same circumstances as John Duarte.”

“This case carries an attitude about punishing agriculture,” Baise adds. “It’s an attitude where tilling disturbs the environment, poisons water and is somehow evil.”

In the background of Duarte’s litigation, President Trump issued an executive order on Feb. 28, essentially directing EPA Director Scott Pruitt to tighten the CWA scope and rewrite the Waters of the United States (WOTUS) rules. “The Clean Water Act says that the EPA can regulate “navigable waters”— meaning waters that truly affect interstate commerce,” Trump stated at the signing. “But a few years ago, the EPA decided “navigable waters” can mean nearly every puddle or every ditch on a farmer's land … It was a massive power grab.”

Rep. Jeff Denham, R-Calif., says the Duarte Nursery situation is not an exception. “President Trump’s executive order redirects the EPA to review WOTUS, including the definition of navigable waterways. Courts should follow legislative intent not legislate from the bench. This is not an isolated incident. A number of farmers in California have been cited by the Army Corps for general farming practices.”

“President Trump and EPA Administrator Pruitt have sent a clear signal that this kind of abusive prosecution is not in the federal government’s plans going forward. Mr. Pruitt said as much about this very case in his Senate confirmation hearing,” Francois says. “But career bureaucrats and prosecutors are still trying to push the Duarte case forward. The new administration has an important opportunity to follow through on its new direction by withdrawing its claims against Duarte Nursery and John Duarte.”

“Things are changing for right now, but make no mistake, all of this radical regulation will be back in the future,” Duarte notes. “I don’t want to go back to feudal Europe where the sheriff of Nottingham rides through your property and tells you how much you owe.

The Duarte legal saga was never supposed to make it to the federal stage: When the Corps sent Duarte the CDO letter in 2013, he was supposed to kiss the ring. Instead, Duarte refused to kneel: “After four generations of California farming for my family, I can’t let this stand without a fight.”

“This case threatens all farmers, not just me. If they can shake me down, they can shake you down” he adds. “We hang together or we hang separately.”