When Fat Equals Flavor, $260 Steaks Get a Diet Makeover in Japan 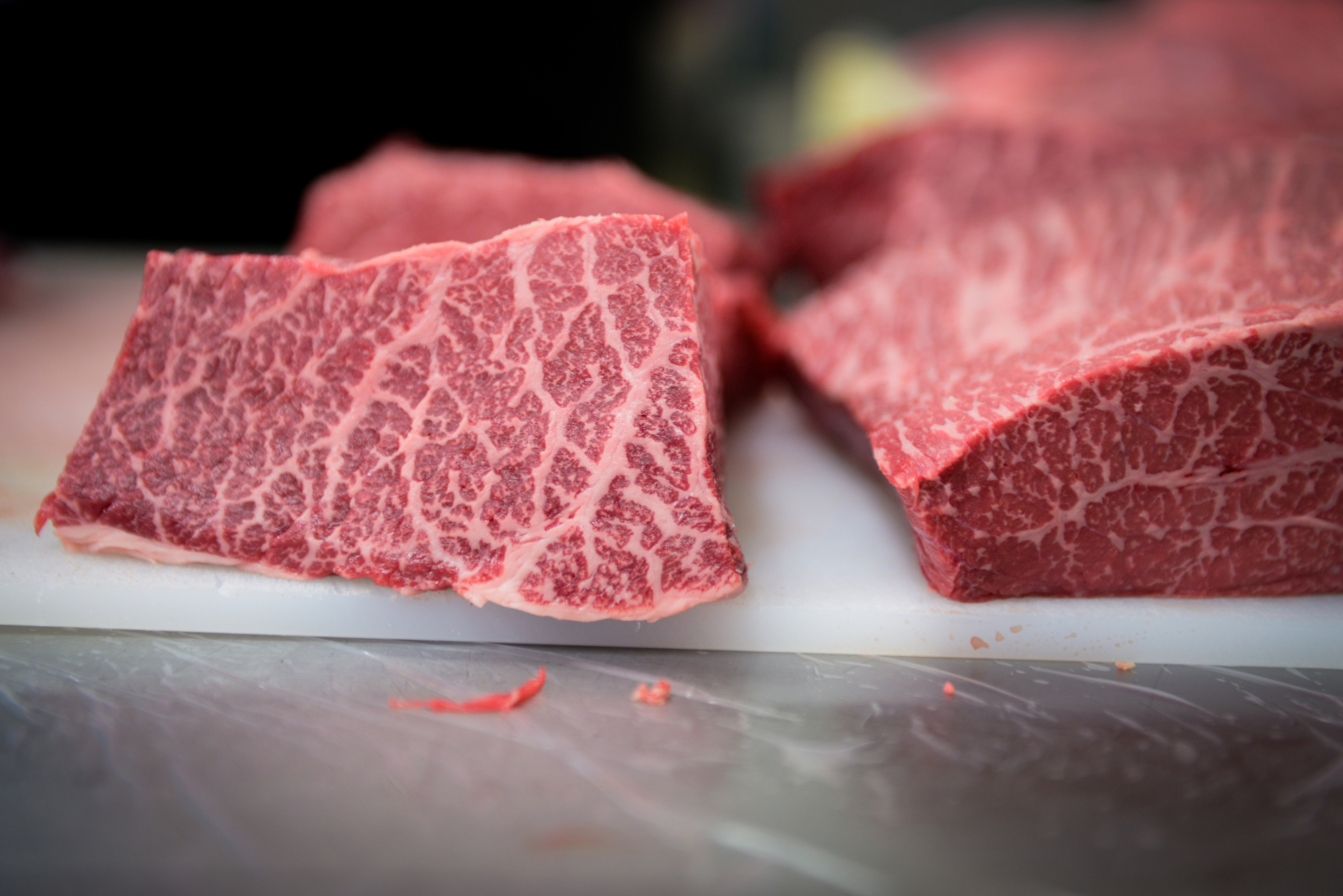 Seikou Sekimura is betting that aficionados of Japan’s Wagyu beef -- one of the world’s most-expensive meats -- are ready for a diet version of the fat-laden, melt-in-your-mouth delicacy.

In the rural northern prefecture of Miyagi, the 64-year-old farmer says he is producing a low-calorie beef with all the flavor of the 7-ounce prime cuts that can fetch $260 or more at posh restaurants. The trick isn’t less fat -- the flesh of his cattle still has Wagyu’s familiar honeycomb of taste-enhancing white tissue -- but making it easier for humans to digest.

To ensure the new beef, called Kampo Wagyu, has the right kind of fat, Sekimura bred traditional Japanese cattle with an even rarer variety and fed them a concoction of herbs to supplement their normal grain rations. The result is a meat he thinks can compete with an expected increase of imported U.S. steaks by appealing to consumers of high-end foods looking for healthier options.

“As Japan’s population ages, consumer taste is shifting to meat without too much fat,” Sekimura said at his farm in Kurihara. Together with partners, he owns 1,200 Kampo Wagyu cattle and sends about 50 a month to a local slaughterhouse.

Sekimura is the only producer of Kampo Wagyu, and output remains a tiny fraction of the 473,000 Wagyu cattle slaughtered in Japan in the most-recent fiscal year, representing a high-end meat market valued at about 370 billion yen ($3.3 billion), Agriculture Ministry data show. But he’s hoping that his relatively small investment in a low-fat variety will help him differentiate in an already rarified food category.

“It’s a valuable product,” said Manabu Inaba, NH Foods’ sales officer. “The number of retailers selling Kampo Wagyu is rising in Japan. We are considering to start its sales overseas.”

Most Wagyu beef in Japan already is unusual compared with meat from conventional cattle because it has what’s called a low melting point, which means it can be converted to liquid more easily and the dissolving fats make the meat juicy and flavorful. The meat also contains amino acids that, when consumed, help reduce fat in the body.

Kampo Wagyu has an even lower melting point (about 21 degrees Centigrade) and almost twice the fat-burning amino acids, including alanine and threonine, according to an analysis by the Industrial Technology Institute of Miyagi prefecture.

A big reason for the difference, according to Sekimura, is that he feeds his animals 14 different kinds of Chinese herbs commonly used in Asia to enhance human health. He got the idea from a chicken farmer who was using mulberry leaves as an alternative to local feed grain. Local grain supply was tainted with radiation after the 2011 earthquake and tsunami that led to a meltdown at the nearby Fukushima Dai-Ichi nuclear station.

The accident loomed large for Sekimura, in part because contaminated livestock increased food-safety concerns among Japanese consumers still smarting from nation’s first outbreak of mad-cow disease in 2001 and the spread of foot-and-mouth disease in 2010 that required culling of a record number of cattle and pigs.

“I wondered what I should give to my cattle in order to make consumers feel confident in the safety of our beef,” he said.

After years of testing, he settled on a mix of mulberry leaves, perilla, adlay, Chinese matrimony vine and 10 other herbs that cost him 500,000 yen a month, or 3 percent of his total spending on feed. The plants are supplied by a tea producer in Ichinoseki, Iwate Prefecture. He spends about 12 million yen a month on traditional feed ingredients like imported corn, sorghum, soybean meal and wheat bran, along with domestic rice hay and malt residue from a beer brewery.

Herbs aren’t the only difference maker. It’s also breeding. Sekimura has 65 cows from Kumamoto prefecture, which is about 1,500 kilometers (900 miles) south of his farm and home to Japanese Red Wagyu, a rare type of the nation’s traditional beef cattle. On the hillside ranch behind his feedlot, Sekimura mates them with Black Wagyu bulls, a variety that represents about 95 percent of Wagyu in Japan. The offspring produce his Kampo Wagyu beef.

Selling a lower-calorie version of Wagyu could tap into changing tastes for Japanese consumers, who are favoring more of the less-fatty red meats more common in the Americas. In the first nine months of 2016, imports of U.S. beef are up 16 percent to 142,655 metric tons, more than making up for reduced purchases from Australia, government data show.

For now, the threat posed by imports hasn’t affected Sekimura. He’s expanding sales through NH Foods to take advantage of prices that have surged after a three-year slide in domestic beef output to the lowest since 1980. He sells each 900-kilogram Kampo Wagyu steer to a local slaughterhouse for about 1.2 million yen, about triple what he was getting five years ago.

He also opened a grilled-beef restaurant, Kounosuke, not far away from his farm. On the lunch menu is a 180-gram (6.3-ounce) Kampo Wagyu sirloin steak, served with locally produced rice, miso soup and pickles, that sells for 4,000 yen ($33).

While Japanese agricultural production has slipped as old farmers retire without successors, the beef industry was hit particularly hard by the Fukushima disaster five years ago. The discovery of tainted meat sent prices plunging. Sekimura said he never contemplated quitting, and now he sees payoffs from his investment in developing a lower-fat Wagyu beef that can appeal to consumers seeking healthier foods.

"Considering the people who lost their lives in the disaster, I, as a survivor, can do anything," he said.