The acreage mix matters to the market, but not to a farmer's marketing plan.
( Farm Journal )

Traders and analysts are now shifting their focus to the possible acreage mix in the U.S. this year, even as some farmers haven’t finished harvesting their 2019 crop.

While the wet weather could hinder planting again this year, some market analysts are preparing for the worst-case scenario, which includes a corn acreage number as large as 100 million acres.

What happens if farmers plant more than 95 million acres of corn in 2020? How would the market react? Standard Grain’s Joe Vaclavik told U.S. Farm Report it shouldn’t matter to a farmer’s marketing plan.

“It doesn't really matter to you; the acreage number is not actionable,” he says. “If I could predict the future, I could I could tell you the number right now, and what would you do about it? Are you going to go sell all your 2020 corn crop because the acreage number is slightly bigger than what people had expected? No, you're not going to do that.”

Based on Vaclavik’s personal experience, the danger in trying to predict a USDA report or forecast is you’re setting yourself up for failure.

“It's not going to help you to make decisions,” he says

AgMarket.Net’s Bill Biedermann says in order to block out the acreage noise, a farmer should focus on their marketing plan today; a plan that focuses on profit.

“We've been out speaking and doing a lot of budget analysis,” Biedermann says. “I was doing a live demonstration last week in Iowa, and based on the numbers that the crowd gave me, we could lock in $100 an acre profit right now. That was using a conservative yield estimate, and we could keep the upside about 60% open on our hedged grain.”

Biedermann said under that scenario it gave farmers the flexibility to capture prices if corn goes higher this year.

“It didn’t matter where the market went, income would be good, but if the market goes up, you'd really make a lot of money,” says Biedermann. “Those are the things that we need to be looking at right now, because it's unemotional. You're looking at profit, not price.”

Looking at profit and not trying to chase the price of corn is something ag lender Alan Hoskins says is a wise plan for 2020.

“As Bill said, the key is looking at that and making sure that profit opportunities are locked down,” says Hoskins of American Farm Mortgage.

Based on conversations he’s having with producers right now, Hoskins reports there’s more interest in planting additional corn acres for a number of reasons.

“We have heard that [farmers switching to more corn] because of the lower input prices that we saw earlier,” he says. “Candidly, people would rather grow corn, at least in the area that we're in, hat is their preference to grow corn.”

While corn supply may grow in 2020, Biedermann thinks exports could pick up, as U.S. corn is at an attractive price for buyers.

"U.S. corn is $50 cheaper than Black Sea wheat, he says. "Looking at Argentina, we are $9 plus the $4 fee out of Rosario, which means we are $13 cheaper. Plus there is usually inflation and demerge risk in Argentina. As for Brazil, they are not offering anything right now, so we are obviously cheaper." 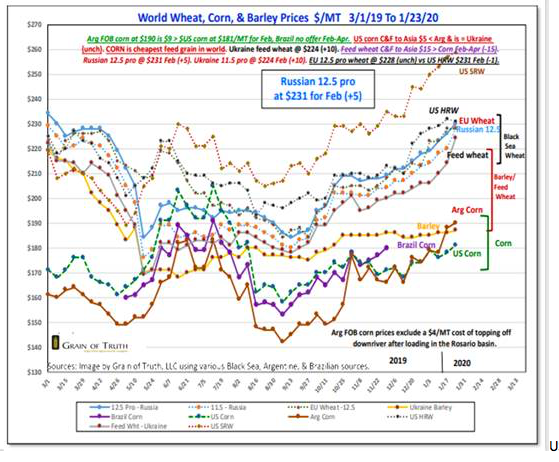 Biedermann told viewers if that price scenario stays the same, he thinks he thinks there's no reason why the U.S won't be exporting more corn by the end of the year.