Winter Wheat Production Down 9% from 2013

Winter wheat production is forecast at 1.40 billion bushels, down 9 percent from 2013. As of May 1, the United States yield is forecast at 43.1 bushels per acre, down 4.3 bushels from last year. 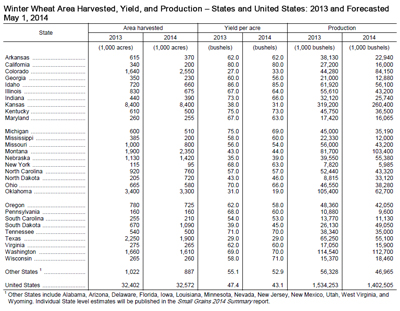 Complete Coverage of May 9 USDA Reports
See AgWeb's full coverage of the May 9 reports, which include USDA's Crop Production and World Agricultural Supply and Demand Estimates (WASDE).