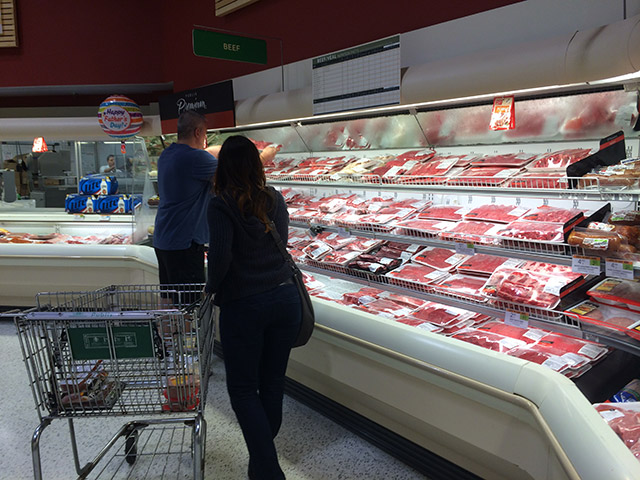 Learning where the meat in your grocery store came from might get harder.

In a ruling Monday, the World Trade Organization rejected U.S. rules requiring labels on packaged steaks, ribs and other cuts of meat identifying where the animals were born, raised and slaughtered. The WTO said the requirements put Canadian and Mexican livestock at an unfair disadvantage.

In 2012, the WTO had ruled against the "country of origin labeling" (COOL) requirements, which Congress originally wrote in 2002. The U.S. Department of Agriculture rewrote the rules to win WTO approval. But Monday's ruling held that the revised guidelines still violated trade rules.

In its decision, the WTO said the labeling requirement forced meatpackers to segregate and keep detailed records on imported livestock, giving them an incentive to favor U.S. livestock.

The WTO's decision was a victory for ranchers who do business with Mexico and for meatpackers, who said the labels imposed a paperwork burden.

The ruling was a defeat for some U.S. farmers, especially those who compete with Canadian ranchers. It also was denounced by consumer groups, who complain that industries use global trade rules to get around laws they don't like.

"Today's ruling spotlights how these so-called trade deals are packed with non-trade provisions that threaten our most basic rights, such as even knowing the source and safety of what's on our dinner plate," Lori Wallach, director of Public Citizen's Global Trade Watch, said in a statement.

The WTO didn't rule out labeling completely Monday. And two meat industry trade groups, the American Meat Institute and the North American Meat Association, called for another effort "to amend the COOL statute so that it complies with our international obligations."

Matt McAlvanah, spokesman for the Office of the U.S. Trade Representative, said: "We are considering all options," including an appeal.

Tags:
Meat
Could China’s Massive Rainstorms Be A “Black Swan” for Markets?
Analyst Digs Through Data to Find Historical August Lows
RFD-TV Interview: Grains & Livestock (8.6.20)
AgDay Weather: “Break” From Heat May Be Short-Lived
4 Options for a Farm Operation Without a Successor