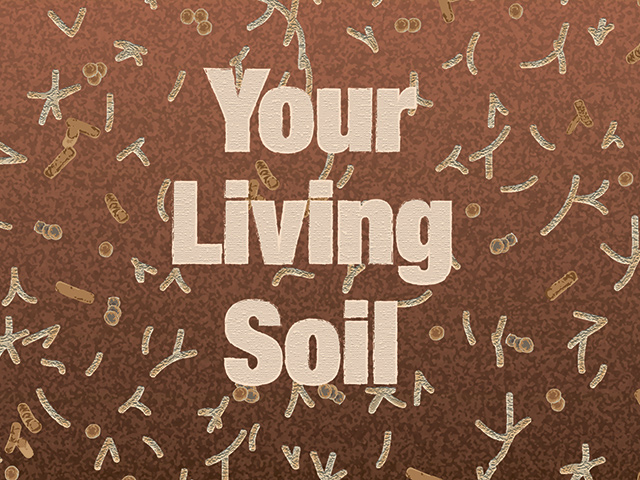 You till (or don’t till), manage drainage and apply lime or fertilizer to grow higher yielding crops. But that’s the result, not the motivation. The reason you take those steps is to make your soil healthier by improving the habitat for microorganisms. You want those soil-dwelling creatures to be plentiful and active, decomposing residue and recycling its nutrients into forms your crops can use.

You can actually see a few of those valuable creatures, such as earthworms and night crawlers. But most are invisible to the naked eye and spend their lives beneath the surface of the soil. One estimate says there are 1,800 lb. of earthworms, 16,000 lb. of fungi, 9,000 lb. of bacteria and 5,000 lb. to 5,500 lb. of actinomycetes just in the top 6" of an acre of soil.

"No one knows for sure," says Farm Journal Field Agronomist Ken Ferrie. "We’re learning more and discovering new species all the time. The numbers vary based on the health of the soil."

Healthy soil contains more "critters of the dark," as Ferrie calls them, working to make the soil as productive as possible. Some soil organisms are carnivores, which eat other living organisms. Some are herbivores, which eat live plants. (Most of the herbivores, such as rootworms, are pests.) Fortunately, more than 80% of the underground dwellers are detritivores. They dine on dead plants, breaking down crop residue and recycling nutrients.

Most of the organisms that improve soil health share one other trait: they are aerobic, meaning they breathe oxygen. "Oxygen is available in the upper portion of soil where fence posts rot off," Ferrie says. "The deeper the soil, the more area in which those air-breathing organisms can survive."

There also are lots of anaerobic species, who live in the absence of oxygen, but most of them do not contribute to soil health.

Viewed through a microscope, fungi look like long threads, with branching chains of cells growing through their food source. They sometimes are visible to the naked eye as white strands or filaments running through a crop residue food source.

Bacteria are microscopic, single-cell organisms that come in various shapes. A gram of soil is estimated to contain 20,000 species of bacteria.

Several species turn full generations in hours, so populations increase or decrease rapidly. Two species, nitrosomonas and nitrobacter, although small in number, play a big role in the nitrogen cycle.

Many bacteria species move in water in the soil solution, propelled by whiplike tails. "Bacteria need moisture to move and to multiply," Ferrie says. "They go dormant when it’s dry. They are very sensitive to pH, preferring 6.3 to 7.0, with populations dropping off rapidly in acidic conditions."

Bacteria are involved in the early stages of decomposition—the easy part—breaking down simple carbons such as leaves, husks, silks, tassels and cover crops. When crop residue is available, populations explode. Bacteria play the biggest role in the carbon penalty because they rapidly increase and use nitrogen in the soil (as well as phosphorus and sulfur) for energy.

Actinomycetes combine some of the qualities of fungi and bacteria. "They are unicellular organisms and the same diameter as bacteria," Ferrie explains. "Like fungi, they send branches and filaments through a carbon source. Actinomycetes give off a volatile derivative that gives fresh-tilled soil its distinctive aroma.

"Actinomycetes do the hard work of decomposition, breaking down resistant compounds such as cellulose and lignin later in the decay process. They are more drought-tolerant than fungi and bacteria, and they prefer warmer soil. They are sensitive to pH, preferring 6.0 to 7.5."

See the common threads? Fungi, bacteria and actinomycetes are all sensitive to soil pH. They all need a carbon source for food. In addition, they all need oxygen and water (but not too much water; if soil gets saturated, they can’t breathe).

Organic matter pool. From your crop’s point of view, all carbon is not created equal. Scientists break the organic matter pool into three types, based on how fast the carbon in each type can be metabolized by soil organisms. Those types include active, slow and passive.

Active organic matter is metabolized in a few months to a few years. "This is carbon from sugars and starches of an organism that is decomposing," Ferrie says. "It is easy to break down. Most nutrient cycling involves active carbon. The active carbon portion can increase and decrease quickly based on tillage and rotation practices."

Slow organic matter takes decades to metabolize. "This is mainly structural carbon—cell walls and cellulose," Ferrie explains. "Slow organic matter is an important source of nutrients, especially nitrogen, throughout the growing season because its nutrients are slowly mineralized by microorganisms for a period of time. It also provides carbon dioxide needed by some microorganisms as a food source."

Passive organic matter, which comes from structural carbons such as cell walls and cellulose, takes hundreds to thousands of years to metabolize. "On your soil test, 60% to 90% of the organic matter is passive," Ferrie says.

The passive fraction of organic matter slowly changes over time. That is one reason organic matter values are somewhat predictable based on the soil type.

"You can’t change soil organic matter values very fast," Ferrie says. "You can change the active portion rapidly, but it is only a small part of the organic matter in your soil."

How it all works. Working together, soil organisms create what you might call the cycle of life. "The first wave is macro-organisms such as night crawlers, which introduce residue to the soil," Ferrie says. "Then fungi, bacteria and actinomycetes join in.

"As they break down carbon chains, obtaining carbon for their food source, they release nutrients, such as nitrogen, phosphorus and sulfur, that are held in the carbon chains. They mineralize these organic nutrients into inorganic, or soluble, forms that can be taken up by plants and microbes.

"Nutrients mineralized from a carbon source feed our growing crops; so the more help we get from microbes, the less commercial fertilizer we need to apply."

Increasing your microbial populations involves the same practices that you’ve been using to grow higher yielding crops. Improve oxygen and water infiltration—shooting for the ideal 60/40 oxygen to water ratio in the soil—by removing dense and compacted layers.

"Treat crop residue as a carbon source to feed your microbes," he continues. "Keep it in the upper zone of soil where there’s oxygen. If you bury residue 9", 10" or 11" deep, it will be decomposed by anaerobic microbes, which, unlike aerobic species, do little to improve soil health and nutrients."

You can use equipment available in commercial soil testing kits to measure soil respiration. More carbon dioxide being given off at the surface indicates there are more organisms at work in your soil.

If soil microbes are plentiful and active, leaves and husks in crop residue (held together by easily decomposed carbon bonds) should rapidly disappear. "If you still have leaf and husk tissue from last year’s corn crop in August, something is wrong with the soil bacteria," Ferrie says.

If you see a lot of big stalks that have not decomposed after two years, you probably have a problem with your actinomycetes. Suspect pH; actinomycete populations will rapidly decline outside the range of 6.0 to 7.5.

Building on the Systems Approach, the Soil Health series will detail the chemical, physical and biological components of soil and how to give your crop a fighting chance. www.FarmJournal.com/soil_health