by AgWeb Staff
After a fall harvest and before the spring planting season, soil is typically cultivated so it can become more fertile and welcoming for plant growth. All farmers practice at least one type of tillage method. Tillage was first done hundreds of years ago through manual or animal labor. Today, farmers use tractors and can choose from a number of different tillage machinery. Recently, conservation tillage has become more popular, including no-till and strip till practices.
Tillage is done to break up soil, aerate soil, break compaction layers, help mix fertilizers, and kill weeds. Many of today’s farmers are transitioning to some sort of conservation tillage. 38% of U.S. planted acres in 2004 used a conservation tillage method, according to the USDA.
No-Till
No-till is a tillage method that requires no actual tilling of land. The theory behind no till is that it benefits the environment, while it doesn’t give up much on yields. No-till farming stores carbon more efficiently than conventional till farming. Plant residue is left unharmed in fields so it can naturally decay over time, thus locking carbon in plant matter, rather than breaking it down faster and letting carbon escape into the atmosphere. 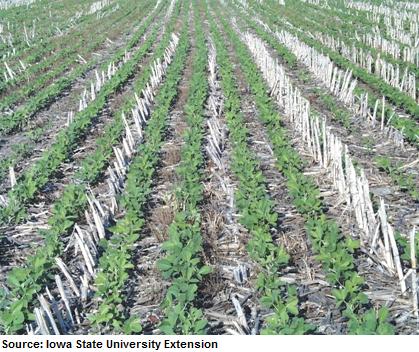 Compaction is a large reason why farmers like cultivating their land. Most fields across the world have a compaction layer somewhere in the top soil. This layer is formed from tractors or other heavy machinery running on top of the field over time. The compaction layer doesn’t allow plant roots to pass through it very easily to absorb maximum nutrients that plants need to grow to their full potential.
No-till farming uses natural means of breaking compaction layers. In areas where there is a hard freeze, soil will naturally freeze and thaw through the winter and into the spring. When soil freezes and thaws, it expands and then contracts, breaking up compaction layers.
Strip Till
When no-till is not practical, farmers can use strip till. Strip tilling is also growing in popularity as a conservation tillage method. Strip tilling is when a farmer only cultivates thin strips in their field where seeds will be planted. The strips are located where the rows of crops are located. Each year, the strips will shift roughly six inches in one direction.
Strip till has become economical in recent years due to the decrease in costs associated with sub-inch GPS navigation. When using strip till, farmers will keep track of each strip using GPS.
A common need for cultivation is to mix fertilizers into the soil. Strip till farming involves an increased concentration of fertilizer in fields, requiring less of a need to mix it in. The same amount of fertilizer is used per acre, but since the fertilizer is applied only in the active strips, the nutrients are concentrated. 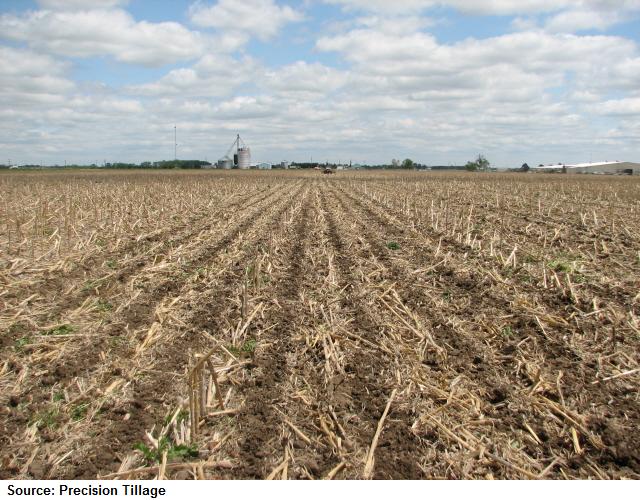 Strip till is a smarter choice over no-till in areas that are prone to wet or cold springs. Strips will tend to heat up faster than fields of no-till because some soil is exposed to the sun. Moisture dissipates quicker in a strip tilled field than a no-till field, because the soil can heat up faster and has an easier access to the ground.
Why conservation tillage methods are used
The government will pay farmers a subsidy if they enroll in the Environmental Quality Incentives Program (EQIP) through the USDA Natural Resources Conservation Service (NRCS). Although EQIP is a national program, each state decides on the qualification for farmers and the payments.
Minnesota and Iowa allow farmers to enter into EQIP if they convert to no-till or strip till, while Wisconsin only offers EQIP to no-till farmers.
Payments vary state by state, but are generally in the $20 to $30 range per acre. Minnesota offers a fixed payment of $23 per acre and Wisconsin pays $19.50, while Iowa offers inclining payments of $15 for the first year, $25 for the second, and $35 for the third. Minnesota and Iowa both have a cap on the maximum acres allowed to be enrolled in EQIP per farmer at 320. EQIP only runs three years and is nonrenewable.
Conservation cultivation has many environmental benefits. Erosion is kept at a minimum with decreased tillage. The more crop residue that remains on a farm field means that there will be less water runoff and wind erosion. Locking carbon in crop residue also lowers the emission of greenhouse gasses.
Costs and concerns
A problem when converting to a conservation tillage method is cost. No-till farming often requires farmers to purchase stronger planters that can penetrate the unturned soil, according to Ohio State University. Strip till almost always requires sub-inch GPS systems on tractors, which has recently decreased in cost to around $10,000.
The tradeoffs to startup costs are the money saved and the environmental benefits. Farmers won’t need to drive over their fields as often using a conservation tillage method, compared to a conventional method. The result is money saved in fuel costs. Farmers can also offset startup costs by selling off old plows once they make a decision to use conservation tillage methods full time. Farmers finally save priceless time by not having to till fields as often.
Each method of tillage, being conventional or conservation, has its benefits. The tillage method used by farmers most importantly depends on their soils and location. Some farmers may like conservation methods better, but their soil types have drainage problems and they can’t change.
Many farmers have weighed the pros and cons of each tillage method, and changes are being made every day. Government subsidies often help offset startup costs and initial yield loss, but many farmers continue with conservation tillage methods well after their eligibility for subsidies runs out.