The Importance of Bees in Agriculture

Bees are one of the most helpful little creatures on our planet, although more commonly seen as a nuisance. In the United States, "Close to 100 crop species…rely to some degree on pollination services provided by this one species—collectively, these crops make up approximately 1/3 of the U. S. diet, including the majority of high-value crops that contribute to healthy diets," states May Berenbaum, professor at the University of Illinois. National Geographic estimates one in every three bites a person eats is from a bee pollinated nut or flower.

There are hundreds of different types of bees, all with different habits, nests and temperaments. The most commonly thought of bee is the honeybee, responsible for most of the honey that we eat. Honeybees have three different job occupations: workers, queens, and drones. Worker bees are all females and they are responsible for collecting nectar from flowers and provide pollination for various plants. Queens give birth to every bee within the hive and they eat the royal jelly, a secretion that is used in the nutrition of larvae that is left behind in the cells from worker bees. Drones are the male bees, responsible only for mating with the queen.

Honeybee hives can grow to hold up to 80,000 bees and they are known to have very easy temperament, only stinging when they or their hive is in danger. When a bee stings, its stinger is ripped out of its abdomen, causing the bee to die, that is why bees are so hesitant to sting a predator. Bumblebees, like honeybees, live in hives, but only house anywhere from few hundred bees to 2,000 bees and produce far less honey than a honeybee.

There are bees that live in solitary homes as well, such as the carpenter bee, mason bee and the ground bee. These bees are very peaceful, and most people do not even know that they exist. Mason bees do not create honey or beeswax, but they serve as the most effective pollinator. Mason bee’s vibrant blue-green color makes them easily identifiable and makes them a favorite for gardeners.

Bees provide essential pollination for flowers that other winged insects cannot do as effectively. Bees collect pollen using a unique technique known as "floral fidelity," meaning they only collect from one species of flower at a time. This helps plants because it ensures the pollen the bees are carrying will be transported to the stigma, or female reproductive system, of the same plant species. Individual bees will collect from one particular flower species for a few days before changing to a new flower, which is why you will not see bees in a small garden with a variety of flowers.

In addition to agricultural crops, the honeybee pollinates many of the native plants that serve as habitat and food sources for our wildlife across the nation, helping sustain the vigor and diversity of the environment.  Food that is used in feeding livestock, such as soybeans and buckwheat, also must be pollinated by bees. In this way, bees are essential the meat industry.
Cotton is a bee-produced product as well. Each year the US produces about 21 million bales of cotton, with over a third of the production taking place in Arkansas, Louisiana, Mississippi, Missouri and Tennessee. Business revenues average $100 billion from cotton alone, making bees incredibly profitable.

Perhaps the most noteworthy contribution bees bring is their work in almonds. In California each year, beekeepers bring their white box hives to pollinate California’s white blossomed almond trees. California is responsible for producing 90% of the world’s almonds, yielding an average of 1.5 billion pounds of nuts per year. Each acre of almond trees requires approximately two hives to pollinate, and to produce a single nut it takes about a dozen bee visits. People have tried different techniques to try and pollinate these almonds, such as using helicopters to spread the pollen. Yet the results are the same everywhere that bees are the most effective pollinators. 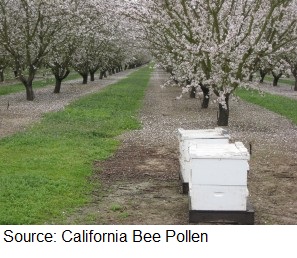 Honeybees use nectar to make honey. Nectar is almost 80% water with some complex sugars. They use their long, tube-like tongues like straws to suck the nectar out of the flowers and then stored in their "honey stomachs". Bees actually have two stomachs, their honey stomach which they use like a nectar backpack and their regular stomach. The honey stomach holds almost 70 milligrams of nectar and when full, it weighs almost as much as the bee does. Honeybees must visit between 100 and 1,500 flowers in order to fill their honey stomachs.

The honeybees return to the hive and pass the nectar onto other worker bees. These bees suck the nectar from the honeybee's stomach through their mouths. These "house bees" chew the nectar using enzymes to break down the complex sugars in the nectar into simple sugars so that it is both more digestible for the bees and less likely to be attacked by bacteria while it is stored within the hive. The bees then spread the nectar throughout the honeycombs where water evaporates from it, making it into a thicker syrup. The bees make the nectar dry even faster by fanning it with their wings. Once the honey has had enough water evaporate from it, the bees seal off the cell of the honeycomb with a plug of wax. The honey is stored until it is eaten. In one year, a colony of bees eats between 120 and 200 pounds of honey, the rest can be collected and used by beekeepers.

Beeswax and honey offer a wide range of uses in everyday life. Beeswax can be used in candles, cosmetics, lubricants, and even dental floss. Honey is used in a lot of cosmetics, including lip balms and moisturizers. 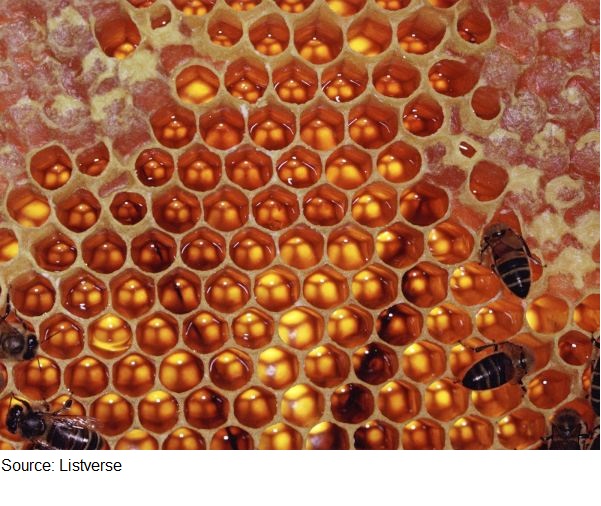 Over the past few years, beekeepers have noticed a startling phenomenon that is happening to bees. They’re disappearing. Entire populations of bees have vanished from mid-air, leaving no signs of a struggle, and no bee corpses behind. They simply just disappear. Researchers are examining possible causes for the disappearance, but no definite conclusion has been found. Some suspect it is a pesticide problem, others are not so sure. One thing is for certain though, if the United States were to lose its entire bee population tomorrow, we would lose $15 billion in the foregone foods such as almonds and cucumbers that require honey bees for pollination.

Bees are nature’s pollinators and the key to providing the world with many different crops. People should not fear bees (so long as you do not have an allergy!) because bees are calm insects that do not wish to harm us, and only sting when they feel threatened. If a bee comes around you, then it is most likely attracted to the food you have or the smell of your perfume. The best thing to do when bees are around is to remain calm and move slowly; swatting at them will only stress them out and make them more likely to sting. Without bees, every part of the world’s ecosystem would decline, which is why they are so important to agriculture.

For daily article on farmland and agricutlure, visit www.farmlandforecast.com.