The toy business is in deep trouble. And not just as a result of this recession, although there was a big article last week in the Wall Street Journal last week about how consumers are cutting back on expensive toy purchases.

No, what I mean is that, at least in the case of one of the largest toy retailers, they don’t seem to care about maintaining relationships with future customers.

In my last blog post, I talked about my son’s sixth birthday.  One of his gifts was a Hasbro Iron May Rocket Blast toy, purchased at the local Toys R Us.  To his chagrin, when he opened it, it quickly became apparent that the air pump didn’t work, and was defective.  To my chagrin, I discovered that my wife, who wrapped the present, disposed of the receipt.

So I attempted to exchange the defective toy at Toys R Us for another one that worked, only to be told that, without a receipt, there was absolutely no recourse for us:  no credits, no exchanges, only a worthless, broken pile of plastic that I left the store with (Scroll down a bit to see a photo of the product in a shopping cart outside of the store). 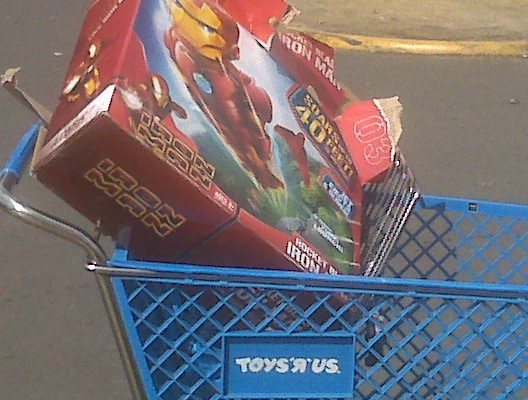 So think about the logic of the situation:  Toys R Us basically told me to take the defective product and get lost.  Without a receipt, it’s not their problem – even though they sold me the product and are still selling identical copies to others.  Despite the fact that there was no evidence that yours truly, the customer in question, was a bald-faced liar, going to great lengths to rip them off of $19.98 by asking them to replace a toy they didn’t sell me, it just wasn’t their concern.  So the broken toy is my, and my son’s, problem, but now this retailer has a much bigger concern:  they’re going to lose a decade’s worth of future toy business from a six year-old, certainly more than $20 worth.

This relates to the dairy business in the sense that I couldn’t conceive that a supermarket retailer, if you brought back a gallon of milk that had turned sour, or a brick of cheese had mold on it, would refuse to exchange it, even without a receipt.  It’s bad business to lose customers over a few dollar’s worth of product.  My wife has taken bad fruit back to several supermarkets in our area, and they’ve always accepted it.  Even farmers markets will often do the same, because food retailing is a relationship business.  No relationship, no business.

This future relationship focus is also the driving force behind the dairy industry’s lengthy campaign to improve the quality of milk beverages sold in schools, especially in the school lunch program.  Too often, lukewarm and lackluster products turn kids off to milk…and once that bad taste is literally left in their mouths, it can be an impossible problem to surmount years hence.  There goes a potential lifelong relationship, dumped down the drain.

So it’s sad to see that in this case, one retailer can only see a receipt (or lack thereof), instead of a customer – a customer it certainly will not see in the future, in our family’s case.  Not all consumer requests are well-informed or workable, and we struggle with that every day in dairy production.  But some consumer expectations, particularly in the ability of consumers to actually have a trusting relationship with the products they purchase, are a critical part of the bond between farmers and the public.  We overlook that at our peril.

POSTSCRIPT: I expressed my concern over the situation via email to both Toys R Us, and to Hasbro.  I got a response from that purchases from “land-based stores”, were a separate department than the online retail division, and my request would be forwarded to the bricks and mortar department of and handled in a few business days.  Still waiting on that.

However, I did hear back from Hasbro – not their customer service contact, but the P.R. department, to which I had also sent a complaint.  Hasbro’s Public Relations rep sent me a replacement toy.  So at least someone gets the customer service angle, but it took the strength of iron man to get a satisfactory result…too much, in this day and age.