It’s the understatement of our new century to say that People for the Ethical Treatment of Animals is proficient at making provocative statements, particularly with their ads.  They’ve really outdone themselves this time, however, in messing with the two most important people in America who happen to be from (or at least are connected to) Chicago:  Michelle Obama, and Oprah. [scroll down a bit to see the image] 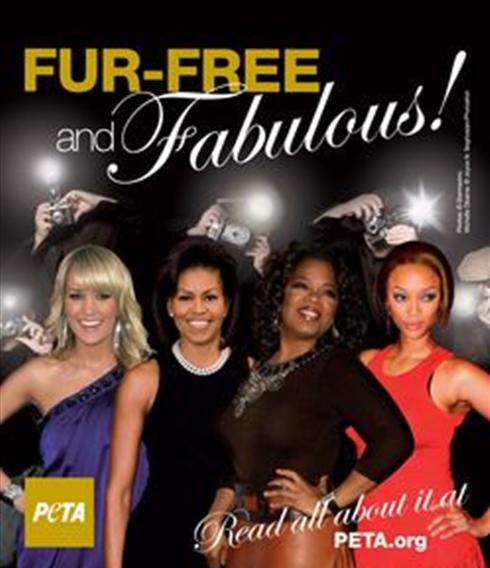 As has been widely reported in places like USA Today, PETA has been running ads highlighting celebrities who are eschewing fur.  The ads can be found online, and are even on vans that are being driven around Washington DC.   The ad features the two famous ladies I mentioned above, along with Tyra Banks and Carrie Underwood (the latter of whom is a well-known vegetarian).  The unauthorized use of Mrs. Obama’s picture has raised a stink with the White House.

Far more interesting, though, is the picture they used of a fur-less Oprah.  (And hats off to the Deceiver.com blog for uncovering the skin beneath the fur).  If you look at Oprah’s skirt in the ad, it’s – irony of ironies – made of leather.  So while technically accurate – the fur won’t fly from that apparel item – it’s also apparent that animal skins, sans the hair, are a prominent part of her wardrobe.  And lest anyone think that Oprah’s brown skirt is pleather, it was the highlight of a Chicago-based magazine article two years ago that made clear the skirt is lambskin.

So what are we to make of all this?  While Obama didn’t authorize the PETA ad or her appearance in it, Oprah certainly does have long ties to PETA:  She was PETA’s person of the year in 2008, and has done advertising for the animal activist group on issues ranging from puppy mills to factory farms.  She even devoted one of her shows to the exploration of the public policy implications of California’s Proposition 2 measure on animal housing.

Is it right to decry fur, but then wear either wool and/or lambskin, or for that matter, any other form of leather?  And who has more explaining to do about the obvious contradiction between decrying the use of fur, and prominently sporting an animal’s hide in a related form?  Couldn’t they have just found a picture of her in denim?  I won’t answer those questions, except to say, somebody has some explaining to do.