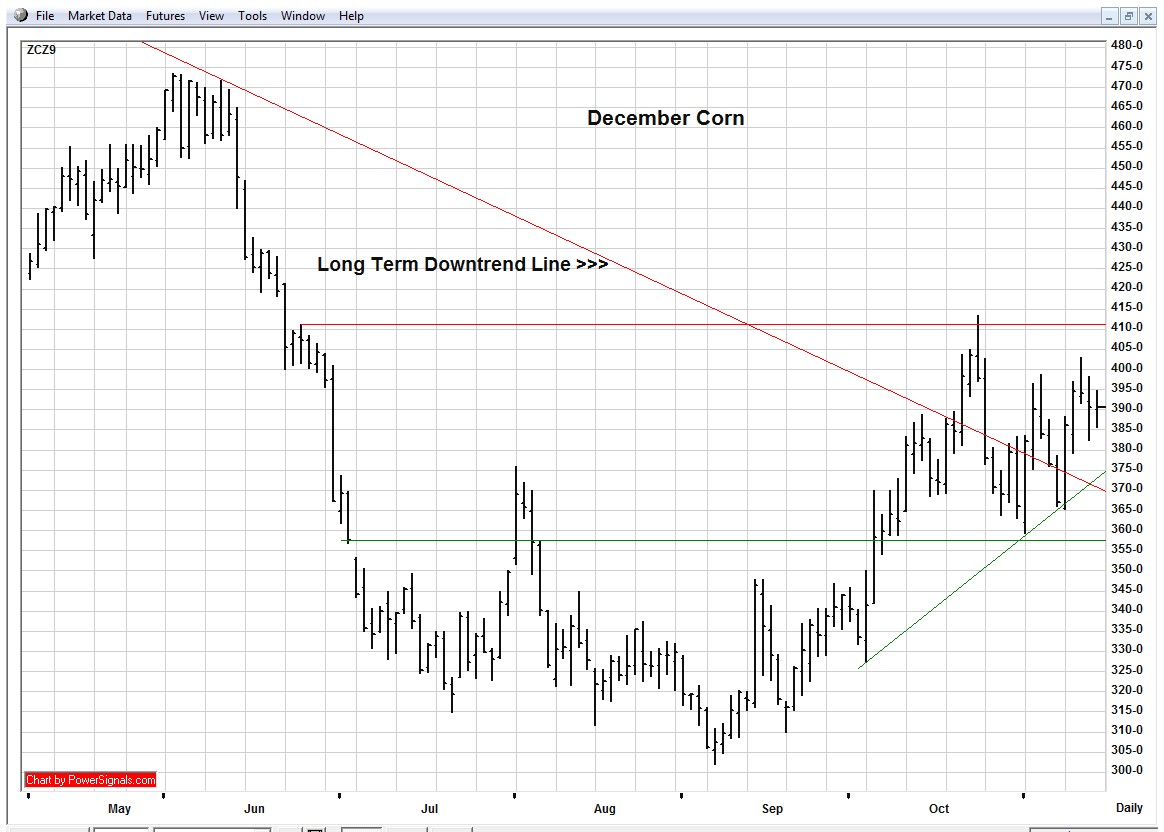 I said "Higher high for the run with a lower close bodes well for more corrective action. Strong support at the crisscross of up & downtrend lines at $3.71".

The 200 day moving average is in play now.

Grains: I could talk about fungus in corn that have annoyed elevators for weeks but now has become a market focus rallying corn. Less corn to feed means a switch to soybean meal, and at this time how much has been or will be switched is unknown. This reversal of buy beans sell corn is the opposite of what the report on November 10th implied, buying corn and selling soybeans. The market is always open to changes in fundamentals as well as outside markets. That is why I do not care what drives a market to a price level; I just care about the opportunities at bracket lines, and trend lines no matter the reasons.

What caused the rally Friday morning? Net sales for soybeans came in at a whopping 1.272 million tonnes (about double than what was expected) which included 961,200 tonnes sold to China. As of November 5, cumulative soybean sales stand at 69.5% of the USDA forecast for 2009/2010, far above the 5 year average of 45.8%. Sales need to average just 253,000 tonnes each week to reach the USDA forecast. If not for this export sales report that came out Friday morning before the open due to the holiday week (normally comes out Thursday) I believe we would have opened lower. This was the final news event that should have pushed it higher for the day, but when near resistance there was not much left on the table.

With that being said, soybeans started the week from the supportive green bracket line and rallied strongly but Friday when close to the downtrend line, profit taking and short selling was in order. Why? Like I have told you for the 2 years of my service, grain markets move quickly from 1 bracket line to another based on events that cause the movement. What took weeks to move a price now takes days. Bearish report for soybeans closed them on the support bracket (which would turn into a resistance bracket line if below) last Friday, rallied to the downtrend line and near enough with nice profits in hand for the bulls to take profits. I am trying to explain how markets "breathe". Even if the market wants to go higher, this exhaling action is normally seen versus the action of breaking through the downtrend line, especially coming from where they were to start the week.

Where do we go from here? Pressure should come from harvest moving along, the dollar is digging its feet in the sand, Russian wheat is now $.90 cheaper than US wheat, and crude oil is breaking down. But the charts are balanced and both corn and soybeans look to continue to trade between the red bracket lines for resistance and the green bracket line for support. I did not like the lower close in soybeans on Friday, but I liked the way corn closed above their 200 day MA. I want to day trade these markets with a bearish bias. I covered all but 5 SF/SX10 bull spreads. I covered some of my SF/SK at 6 cents the low. I have no other position in corn and soybeans now. December corn options go off the board this Friday and $4 could act as a magnet, because so many calls and puts are using this strike price and markets like to trade where the "paper" is.

Find out why people from Canada, Germany, India, Switzerland, and the UK keep renewing this service.