Ask yourself, how well would I have traded this market if I had these numbers last night? Subscribe now! See for yourself why this second year of service has quadrupled my subscriber base.

Are you still using a service that comes out in the morning and gives you numbers reflecting what has already traded, and worse than that uses 4 or more support, and 4 or more resistance numbers?

Sign Up for the Free Live one on one Farmer Hedging Program Webinar By: Howard Tyllas 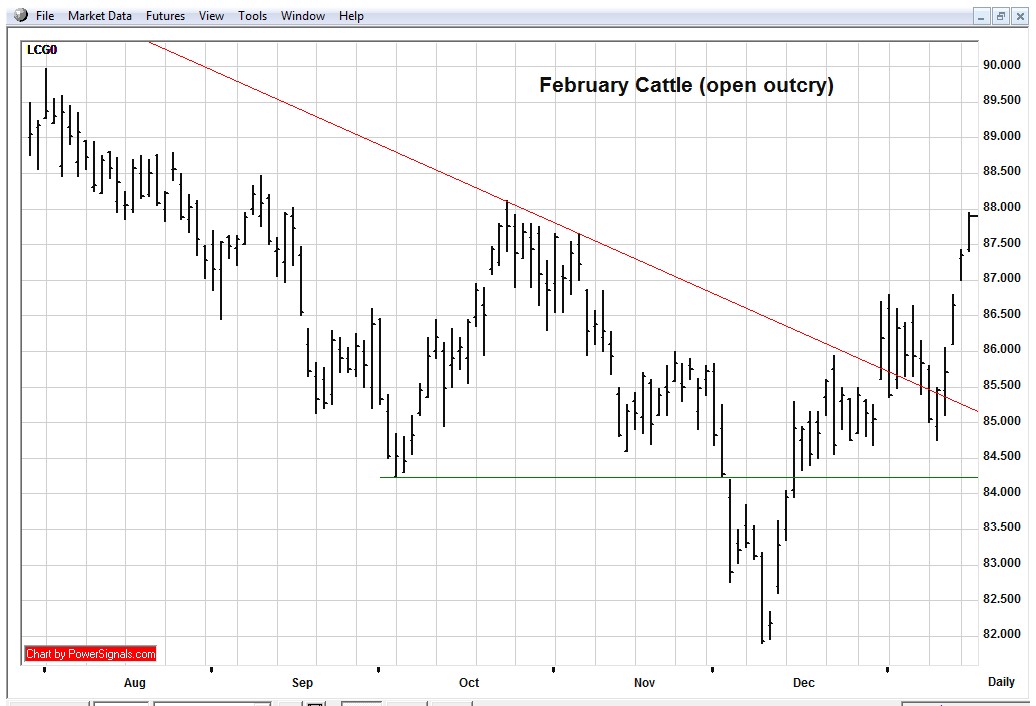 I have been saying "Gap higher opens are bullish and the charts are friendly now as we approach next resistance levels. Trading here turned the chart pattern positive, but will be facing stiff resistance at 88 and 90".

Notice how I use the open outcry chart to locate gaps, but I do my numbers for the electronic market as always. Open outcry is where I find the major players doing business.

Cattle: Helpful numbers. This is a sale here with a buy stop just above the 88.55 gap to protect.

Cattle: Bulls want to see a higher open and have it turn into a gap at the end of the day. Bears would like a sharply lower open and produce an "Island Top" on the chart. I have the same thoughts as yesterday to sell it higher near resistance for a day trade.

Cattle: Market has been gapping higher and friendly chart encourages the bulls. It has been sometime since we have been extremely overbought as we are now, so I would be inclined to sell resistance for a day trade using a buy stop not risking much.

Cattle: Same thoughts as yesterday. If I was long I would look to take some profits and buy a pullback. I will say that the chart is at its first resistance and if they get above that they have one more hill to climb before a possible breakout to the upside. I want to sell at resistance for a day trade only at these levels. I do not want to cheerlead it through tough resistance of 87.22 FG. I do not mind playing the long side, I did call for a possible head and shoulders bottom for some time, but I never buy at a resistance level. If I want to buy I would use my numbers. I am not a long term trader and even if I was in here because of a bullish bias from fundamentals, the chart shows it is a coin flip above 87.22, but until then it is a sell against it. I would not risk much to be proven the trade did not work, but I do not want to be short this market if it closed above 87.22.

Cattle: .17 off the high and .17 off the low. Right in the middle of the recent high for the run and low. Market is in balance and this chart could go either way, and I do not have a bias for today.

Cattle: Accurate numbers. Market holding support and I am looking for some sideways action.

Cattle: Spot on numbers being 2 ticks from the high and 2 ticks from the low! Of course I want to have a bullish bias for my cattle producers, but the longshot who had a 3 length lead turning for home is "spitting the bit" when it gave up at the downtrend line when the horse named "Bear" is starting to blow past him. The finish line for "Bear" is the bracket line support, and if that goes that line (green) turns into resistance and the market should test the contract lows. The race is not over, and many things can happen in the stretch, but bear has the momentum. As long as the support bracket line holds the head and shoulders formation is still in play.

Near term bullish, longer term bear market, is like saying a horse that is winning is now moving up in class (near the recent highs of the last correction) and that is where he cannot overcome the better quality of competition (the resistance at a high level) and he loses control and goes back down in class until he improves and gains strength to try again. New readers should note, I had race horses and raced for 10 years continuously year round in Chicago. That is why I use this analogy.

Bottom line: Looks like bears are gunning for a retest of the bracket line support at 84.22. This is where I would consider covering shorts or if waiting for a level to go long. The way I would trade today is using the numbers; they have been accurate for quite some time now.

Find out why my subscribers from Canada, China, Czech Republic, Germany, India, Switzerland, South Korea and the UK keep renewing this service.