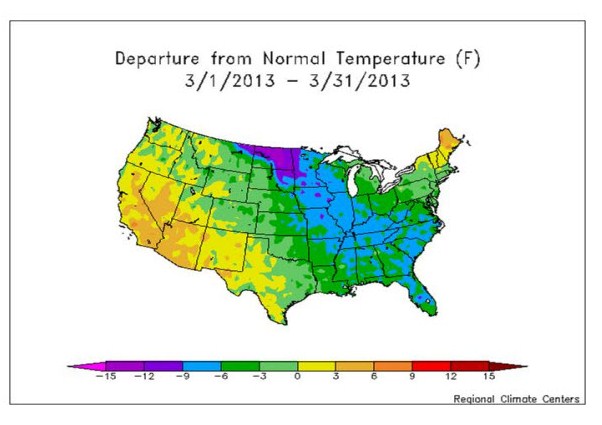 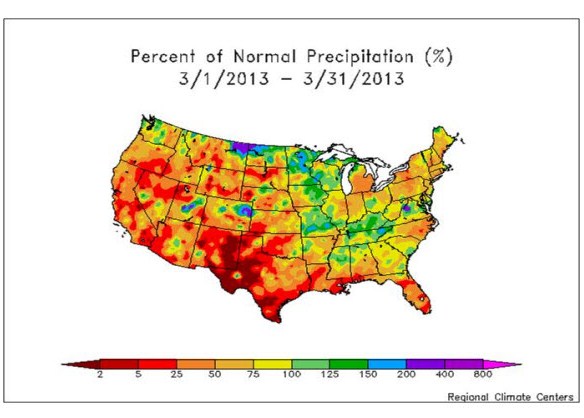 The persistence of a large high-pressure system over the North Atlantic led to a southward displacement of the polar jet stream across the central and eastern United States. That resulted in a steady delivery of cold, Canadian air, leading to below-normal March temperatures in most areas from the Plains to the East Coast. Monthly temperatures averaged more than 10 degrees Fahrenheit below normal in portions of North Dakota and neighboring areas. In contrast, mild weather covered much of the West, leading to premature melting of high-elevation snow packs; however, the Western warmth also promoted spring fieldwork and crop development.
The North Atlantic blocking high also slowed the normal progression of storm systems, leading to an active pattern in some parts of the country.

In particular, significant precipitation fell in several regions, including portions of the northern Plains, Midwest, and Ohio Valley. On several occasions, precipitation fell in the form of late-season snow; however, precipitation largely bypassed several areas, such as the southern Plains, the Gulf Coast region, and parts of the Northeast.Most of the West also experienced drier-than-normal weather, fueling concerns about spring and summer water supplies - especially from California to the central and southern Rockies.Agricultural highlights included the lack of spring fieldwork in the Midwest - in stark contrast to March 2012 - and continuing stress on rangeland, pastures, and winter wheat from South Dakota to Texas. In parts of the Midwest, temperatures during March 2013 averaged more than 20 degrees Fahrenheit below those observed a year ago.

On the central Plains, drought was so deeply entrenched that even a moderately wet March failed to substantially improve subsoil moisture levels or crop conditions. On the southern Plains, a return to dry conditions coupled with late-month freezes, maintained or increased stress on winter wheat. Late-March freezes also struck much of the remainder of the South, threatening emerging summer crops, heading winter wheat, and fruit crops; however, Southern crop development was far behind last year's pace due to persistently cool conditions, helping to reduce the overall threat of freeze injury.

Below average March temperatures stretching from the Great Plains eastward led to fields remaining frozen for longerthan normal resulting in delays of spring fieldwork for portions of the Great Lakes region and Midwest. Most notably, temperatures in portions of the northern Great Plains fell to more than 9 degrees below normal. Elsewhere, warm conditions in the Southwest provided producers ample time for fruit, vegetable, and hay harvest, as well as spring planting. Precipitation was below average throughout parts of the United States during the month, with much of the southern and western portions of the country receiving moisture totaling less than 50 percent of normal.Field preparation for row crops was ongoing throughout much of the southern half of the Nation as March began, with producers cultivating fields, applying fertilizers and herbicides, and irrigating fields ahead of planting. In California, rice paddies were drained and leveled, while seeding was underway in Louisiana and Texas by March 17. Sugarcane producers in Florida and Texas were harvesting the remainder of their 2012 crop toward month's end. By March 31, small acreages of most row crops had been planted, but, when compared with last year's early start, the overall planting pace was behind normal in most areas.

Despite an increase in precipitation compared with recent months, soil moisture levels and winter wheat conditions in the central and southern Great Plains failed to show substantial improvement during March. Conversely, irrigated small grain crops across the Southwest were developing well. High winds blew throughout Texas during the month, quickly drying out any available topsoil moisture. On March 31, thirty-four percent of the Nation's winter wheat crop was reported in good to excellent condition, compared with 33 percent on November 26, 2012 and 58 percent from the same time last year. Throughout much of the Hard Red growing region, soil moisture shortages negatively impacted crop condition
during winter dormancy.

The markets now covered daily are Soybeans,Corn, and S&P

If clicking on the above link does not work please copy and paste the following in your browser:

Disclaimer:    No guarantee of any kind is implied or possible where projections of future conditions are tempted. Futures trading involve risk.In no event should the content of this be construed as an express or implied romise, guarantee or implication by or from Howard Tyllas, that you will profit or that losses can or will be limited in any manner whatsoever. No such promises, guarantees or implications are given. Past results are no indication of future performance.