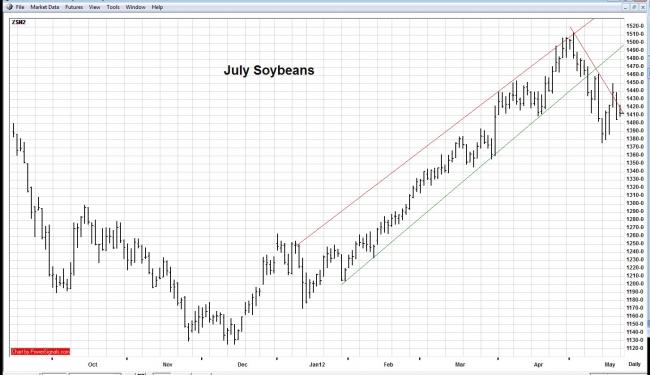 For 5/22/12: I still say "Last week's low is support, downtrend line is pivotal now, and the daily numbers resists".

Grains: Spot on soybean numbers, spot on corn resistance and accurate support numbers. After July corn made a new high for the run, it closed lower on the day which bodes well for another down day to follow. It is hard for me to believe that we are at these price levels with crop conditions and early planting on track for record yields. Unless the yield is under 162 or 163 BPA, $4.50 should be realized by harvest.

I am glad that some of my producers did take advantage of the current price to roll from the short June to July calls, and also get more protection in the new crop. I am all for selling a call spread and buying a put spread, and since I am not bullish I would not ... Subscribe now!

November soybeans could not get past $13.20 the last 5 days, in spite of a quick $1 in wheat and $.54 corn rally. It did lose $.30 last week. This is the market with the best fundamentals versus corn, yet it has little to do with how the market is trading right now. Not knowing why the market is doing what it is doing is no problem for me, because I need not know the reason why, I just need to know what I am doing and why.

Some of my producers did sell some of their cash corn, and 2 had record basis today when they sold it. They are in SD, and if you look at the crop progress report, they have the best conditions in the country right now with 86% good to excellent, and ND beats them at 87%, I am not joking! These are the farmers with some of the toughest conditions and weather to contend with.

Old crop soybean June calls should be rolled to July now, unless you think we can stay here or go higher before Friday. You have a lot more to lose on the July calls if the market comes down than what is left on the June.

I continue to say "I would trade the numbers without bias, but prefer to take the sell signals. I would risk $.04 in corn and $.06 in soybeans using a stop to protect any idea".

Grains: Spot on grain numbers. Anyone could create a story based on fundamentals that are basically unknown, to justify their position. I have said time and again that the fundamentals are mostly unknown this year and are guesstimates, and have no value for participating in the market. I have warned of the market being volatile, making new lows (it did) and it would not surprise me to see it rally past my expectations, and then making new contract lows or highs by harvest. It all depends on the weather, and the price swings will be volatile because of the fund participation. Yes I want to sell rallies rather than buying the breaks, and I will continue to think that until there is a true concern with the weather affecting yields. This is one of the hardest years for the fundamentals to help me with price discovery, and so the shorter the time frame to trade in is better for me.

I do not know what the market will do, and I am surprised by the recent strength in corn and weakness in soybeans. I look at each market on its own chart merits, and try to take advantage of any rally or break. I do what is right for me when I do it, and do not look at what happens afterward to make what I did right or wrong.

July soybeans finished the week down $.01 which is a losing round for the bulls. It made a low of $13.76 on Monday, and a high of $14.49 ¾ on Thursday. On Friday it closed at $13.05. Is that volatile enough for you? That range could be the parameters for this week, but I think it is more likely that the low will be taken out before the resistance. After the market made a key reversal on 5/2 with a new high for the year and closed lower, the last 2 weeks posted lower highs and lower lows, and I see the same for this week too.

Outside of last week's parameters, July soybeans have support at $13.30, and that is about ½ ways for the entire move since January. Resistance is at $14.90 where the recapture of the uptrend line would be and now it acts as resistance.

Who would have though July corn could close $.54 ½ higher for the week? July corn closed on a downtrend line which is now pivotal, and then the next resistance is major near the 200 day moving average at 6.59 ¾. This has been key resistance the last 6 months containing previous advances. All hedges in old crop will make more than their last morph above their put strike. Some have a few June corn calls yet to be rolled to July, and this is the last week to do so. This week you should really take advantage of the time decay and high prices to roll.

You might have only 3 more weeks to close out the old crop hedges to make cash sales and call it another windfall profit marketing year. The best time to sell the cash and get out of the hedge is when the market is ...Subscribe now! I would sell some cash now even if I thought the squeeze is yet to be seen. You might be right, I am starting to think there might not be as much corn as what the USDA says is being stored on farm and not required to be reported. It really does not matter to me, but perception drives markets temporarily, and I just try to take advantage of the price swings no matter the reason for the swings. Selling some cash and "banking" very good profits since the July puts were entered, is the prudent thing to do. It is also something to think about when you "finance" the hedges using options, if you look what the basis they wanted for the last 6 months for December 2012 corn, it makes what we pay for our protection and the right to still be long, look really cheap.

Since March 19th December corn has made lower highs and lower lows, and that pattern will be broken above $5.57. Until then, anything I can do to take advantage of the rally I want to do, and that includes just buying more put protection for even just $.30 or $.40 more coverage down to $4.60. The bulls have the "double bottom" at $5 the last 2 years providing a springboard to close $.31 ¾ higher for the week. There is a gap yet to be filled at $5.43 ¼ and until that is filled that will be good resistance and my first resistance for Monday. The major downtrend line is $5.55 and worth selling, and if that goes we have resistance $.20 and $.30 above there. I would think it cannot get above the downtrend line unless the weather forecast is calling for hot dry weather. Support should be found ½ ways down to the $4.99 low.

As soon as they have the fundamentalists convinced that buying beans and selling corn is the way to go, soybeans close $.33 ½ lower and corn $.10 ½ higher on Friday alone. This is not the only year or time I have no idea what is going on but manage to trade just as well as when I think I know what the actual fundamental picture is.

After the close we might get the first crop conditions in the crop report, but whatever it says will be discounted if problematic hot/dry weather is in the forecast. I continue to say (on Friday it worked well for soybeans, but not for corn) "I would trade the numbers without bias, but prefer to take the sell signals. I would risk $.04 in corn and $.06 in soybeans using a stop to protect any idea".

Grains: Spot on soybean numbers and accurate corn numbers. Markets as always can and will do anything. My job as a trader and your job marketing your grain are to take advantage of the price swings in order to make money. You can see how July corn has rallied and stopped exactly at the downtrend line resistance. If above it will become support, but below it is resistance and a good place to go short or take profits if long. July soybeans could be forming the right shoulder of a head and shoulders top if $14.50 contains rallies the next 2 weeks.

Any rally in December corn to its downtrend line at $5.40 should be taken advantage of by extending all current protection down to $4.60 ($4.54 major support). $5.55 is the major downtrend line and if above there the bulls would be in control, and I would take profits (from time decay) buying back some of my short call spreads then. I want to take advantage of the current corrective bounce by buying the $5/$4.60 put spread that settled at $.14 1/8. I can pay for it by ...Subscribe now!

The closer we get to next Friday, the more you should roll from the June to the July calls. The money (premium) should start to come out of the June calls in a big way today. Here is another chance to reflect your bullishness or bearishness by the strike prices you decide to sell. Do not let the market go down to a point where the June calls will lose a little because there is nothing left versus what is still on the July to lose. The higher the market the more you will get for the July calls versus the June. The lower we go the less you will get.

I would just "man up" and get more protection in November soybeans. Deep pockets and bearish then you could ...Subscribe now! This is really your decision, your risk, your reward, and your money. This is your way of trading, these are the times to "gamble" or not, or limit your risk. This is much more controlled than being unhedged, much less risk, and many more opportunities than just the one time "sale" that could be a long time coming.

"I would trade the numbers without bias, but prefer to take the sell signals. I would risk $.04 in corn and $.06 in soybeans using a stop to protect any idea".