Subscribe now! Do yourself a favor and get your numbers after the market is closed to be used for the next session trading. Ask yourself how much would it have been worth to read my comments and get my numbers 14 hours before today's open outcry?

Sign up: Free Learn a better way to hedge for farmers After you learn (no costs or fees), I will execute your hedges with you on the phone with a floor broker on the grain floor inside the pit trading. You will hear bids and offers and can direct or change your order. 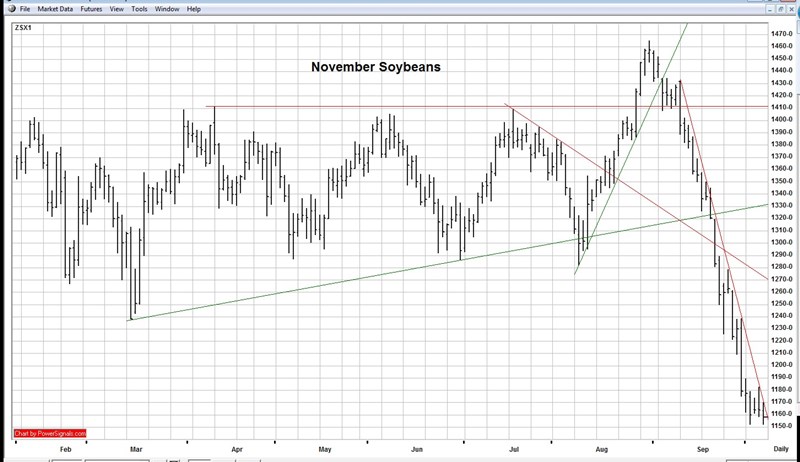 For 10/10/11: Steep downtrend line is pivotal now, and daily numbers support and resist.

Grains: Spot on numbers. Average trade guess for corn yield is 148.7 BPA, up .6 from the last USDA forecast of 148.1; I am looking for 151 BPA. Average estimated total production is 12,471 MB which is less than the last estimate by 26 MB with a reduction in harvested acres offsetting the higher yield. I think we will see an increase instead. I will go with the USDA 41.8 BPA for soybean yield, but the way exports have been I expect exports will be reduced adding more carryout than expected. If 43 BPA is realized we should trade below $11, if 41 BPA we might need to ration and $13 or higher would probably be needed to accomplish that task.

Right now soybeans might be priced right if the report is as expected, with $11.50 near the lows in the September through November timeframe in 2006, 2009, 2010, but in 2008 with the economic meltdown it was disaster, and this year we all know that is waiting "in the wings" and could come "on stage in the spotlight" with all eyes on it.

Markets "breathe", they cannot keep inhaling or exhaling forever. Corn market inhaled its way to a $.45 correction last week, before exhaling $.27 of it to close the week. You must understand that "value" is not a price but rather a price range. Notice how the downtrend line acted as perfect support on Thursday and Friday, and more proof of how a resistance line acts as support when the market is above it. In my mind it is the place that the bulls will defend and not lose control as would be the case if the downtrend line was recaptured. The trouble the bulls have is the steep downtrend line is not like a longer term line that does not change too much in a given week; this line will be $.40 lower at the end of the week. On Monday the line comes in at the gap of $5.87 ¾ and will be strong support, and if that goes the low of last week should be tested ($5.72 ¼). Bearish report should send the market to test the low of March ($5.44 ¾). Resistance continues to be the long term uptrend line that starts the week at $6.20. That line the bears will defend as they did last week, but for the bears that line only changes $.05 a week and does not present the same risk to defend as the downtrend line does right now.

We are at historic highs for October, harvest pressure is sure to be near if not here already and the PRC is not buying even though the economics are cheap compared to the last few months. If the PRC does start to buy that would really underpin the current market, and if the producers decide to store instead of market, that would also be supportive. The market needs something to support it now, and the funds might further liquidate fearing an economic meltdown. I think production will be raised on Wednesday, and again raised in November.

October soybean meal and soybean oil futures expire on Friday. Banks and the Fed are closed for the holiday on Monday, but the grains are trading and will be in the open outcry session. Soybean chart unlike the corn chart has remained under its steep downtrend line, and until that line is broken, the bulls will remain in trouble. New lows look imminent unless the market can gap higher tonight. This week the resistance will be $11.90, and then the $12.39 level after that.

Today I want to trade the market without bias today and risk $.06 in corn and $.07 in soybeans on any idea using a stop to protect.

Grains: Spot on numbers. Corn managed to rally sharply in the overnight session, but was stopped as it neared the uptrend line which it failed to recapture. It once again tested it in open outcry, but after a $.45 correction it lost the ability to attract more buying. In my mind I am only concerned that the market failed to recapture the uptrend line which was a good sell signal no matter what the market is.

You know I look at market to generally be in the middle of the recent trading range before we go into reports. With the poor action closing unchanged, makes me say the high this week is in until the report on Wednesday. It looks to me that the market will probe the downside. The low for pre-report looks also to be in, but I am bearish with an objective of $5.50, and since it is not unusual for production to be raised in the October and November production reports after being lowered the previous 2 months, I look for an eventual test of $5.

Exports were huge on this week's export sales report, but that did little to encourage the market. People who bought this morning "because" of the big sales report, hopefully learned a lesson that does not tell you at what price to get in, get out with a profit, and most importantly it does tell you how much to risk. The problem with fundamentals is that the latest fundamentals even if it has not changed in the 3:45 open outcry, the price it trades at has. How do you determine how much to risk on the idea? Look at a chart, % of price, amount risked? If that is the case, realize it or not, you are trading technical's and not fundamentals. I trade charts, period! I keep a casino owner mentality, not a player. Emotions do not exist in my trading.

Lastly, I am hearing talk of La Nina again this year, last year SA had a record soybean crop of 75.3 MMT in spite of it. CONAB said they are estimating production this year at 72.2 to 73.2 MMT, with planted acreage up 2 to 3.5%. Celeres (analysts) came out with Brazilian production at 75.2 compared to their estimate last year of 74.9.

I want to day trade the numbers without bias and risk $.06 in corn and $.07 in soybeans using a stop to protect any idea.

The weekly service is "Monday only" and comes out usually by Saturday morning so you can prepare for Sunday night and Monday's trade.