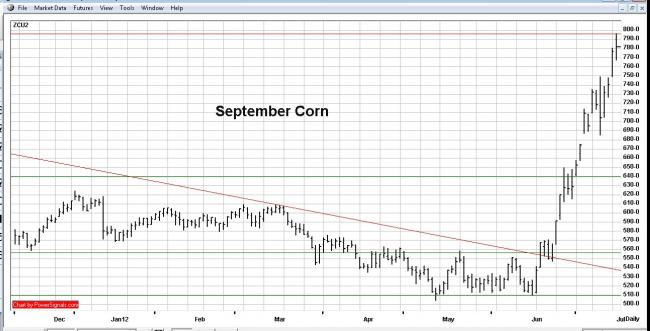 Grains: 5 numbers were spot on, 3 were accurate. Market came very close to a reversal making new highs for the run and closing lower, but they managed to close slightly higher. That tells me the market might not be done just yet, and the gaps below are strong support too. Market came back to "trade by the numbers" waiting more coloring between the lines until more of the picture of further declines is seen. Hardest fundamental picture and unknown outcome I have ever seen.

Further crop condition declines are on tap for Monday, and weather patterns seems to remain the same for now. We might spend a few days trading at these nosebleed levels before going higher until panic sets in, or back down to a level where the buyers show up to stop the declines. Flip a coin.

What has the market priced in for yields? Has the market priced in more shortfall than what is thought the yields are now? Have we priced it in? Add this to all the other guesses, and for me it is all useless because it is all based on perception, momentum, and ultimately just more guesses. Brings me right back to the charts, which is the final decision for all my trade ideas even when I think I know the fundamental picture clearly. DO NOT get emotional when participating in these record high price markets.

I had my first producer hedge 10 contracts of the December 2013 corn. He bought the SUBSCRIBE NOW!

Soybean put spreads are still expensive, but it is never wrong to lock in profits whenever you want to. Retest on Tuesday's high should be considered a place to do a little something. Corn spreads are cheap such as the December $6.40/$5.50 put spread that settled at $.12, and it does seem far away but there is just over 4 months until expiration on 11/23/12, and much can happen.

Even though we have had an extreme rally, there have been little signs of profit taking. I continue to want to trade the numbers without bias and risk $.06 in corn and $.08 in soybeans.

Grains: Resistance numbers were accurate, and the support numbers were not in play due to the sharply higher open. Crop ratings fell below expectations, and still well above 1988, but I remember 1988 well and the drought without a doubt in my mind happened on the July 4th 3 day weekend, when the country was awakened by thunderstorms on Friday, and continued to rain over the entire weekend and was still drizzling on Tuesday morning on the opening bell. We opened soybeans about $1.50 lower because there are no limits in the spot month. This is not July 4th, and it is not raining either. Anything is possible, and the market backs what I have seen the last 40 years in just the last 5 years, and now you can say "the market can and will do anything".

Market looks poised to test $8 December corn, and locking in a little is the prudent thing to do, but we want it to get above there, and wait for a sign of capitulation or just when it hits a price that you want to lock in more. I do not want to sell a call spread just yet, maybe this market will get crazy in a week if this drought continues, so just extending up put spreads is continuing to let the upside run, and just spending something after the fact by buying put spreads.

Everyone is long corn and soybeans now, and it is YOUR decision on what you do and how you do it to reflect YOUR mindset. If you want to be long unscathed and have unlimited upside, guess what, YOU ARE. If $10 corn or more is in your dreams, your hedge is not holding you back.

Now it is like being at the casino and winning a lot and it is on the table. Yes you are winning $100,000 now, but unless you walk away you have not won it. You're winning it, but you have not "banked" it yet. When you finally leave the table you could have $200,000, or you could walk away a loser. If you keep putting $5,000 in chips in your pocket every time you make $10,000, when you finally have no chips left on the table and walk over to the cashier's window and empty your pockets, you might have won $75,000.

Buying put spreads are just like putting chips in your pocket. At some point in earnings you need to have a plan on how to keep it. Selling call spreads is like when you have the last $10,000 on the table, your pockets are full of chips, and you are happy to bet "double or nothing".

Corn has been strong all night but soybeans have tested the first support and resistance numbers and they held. Soybeans were lower on the night although for an hour or two, and that is the only sign of weakness. I continue to want to trade the numbers without bias and risk $.06 in corn and $.08 in soybeans.

The markets now covered daily are Soybeans, Corn, and S&P.

My numbers usually are sent at least 1 hour (via your email) in advance of the night session. Subscribers use them as best suited to their own needs and sometimes that involves the overnight trade.