It’s an often phrase: I’ll sell my corn IF… The “if” can be anything, if it reaches my target price, if it looks like I will grow a decent crop, if basis gets to my target, etc.  Many of these stipulations are in fact solid rationale for a marketing plan.  Where we run into trouble is having unrealistic goals set in the first place, no contingency plan, or fail to make changes to lock in that goal after the target has been reached.

While this article may sound like the typical fear vs greed speech, it’s much more than that.  It’s about making those hard decisions based on knowledgeable assessments of the potential outcomes, at any yield and price.  Insurance provides the backdrop for this certainty, meaning you have guaranteed bushels to market against with confidence.  A certain amount of those marketed bushels need to be “non-deliverable” to avoid oversold problems at harvest, but by making calculated marketing changes, you can improve your minimum return throughout the year.

For a case study let’s examine a theoretical Midwestern grower who has 2,000 acres of corn-on-corn during this marketing year.  His APH is 200bpa, his cost of production is $800 per acre, and he selects an 85% RP policy.  To keep it simple we will assume his basis will be zero.

After some consideration and thoughtful analysis of how far corn would have to move to achieve his target, he sets his return on investment goal at 7% over cost, or $856 per acre.  While this is his target, he is also aware that the market may not give him that opportunity, so he sets another goal to at least stay above breakeven assuming he will grow his average 200bpa.  He sets out to find a plan that can try to achieve both.  The following chart is his profitability as it stands after the insurance floor has been set and before any other marketing decisions have been made.  I have highlighted the $4.00 level since that is the breakeven point. 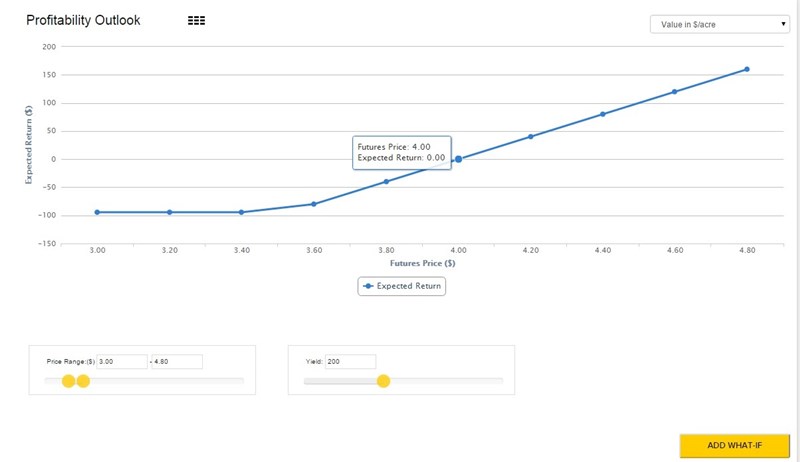 As seen on the chart, the risk flatlines around $3.50.  This is where the revenue policy will begin to pay if his yield averages 200 bpa.  With that in mind, the producer implements the following strategy:  Sells all of his expected production (200bpa) between futures and cash sales at the available price immediately after insurance was set, which in this case it was $4.15 on March 2nd.  To keep his upside open to try to achieve his target return, he also sells an equal amount of the $3.50 December puts for 10 cents to help pay for December $4.50 calls at 23 cents.  The net premium cost of the options was 13 cents which means he was able to keep a floor of $4.02 (13 cents minus a futures price of $4.15).  The plan will keep revenue above costs as long as he gets his 200 yield or above, even if the market falls to $3.00.  If corn rallies he still has the ability to make more with the $3.50-$4.50 put/call spread.  The following chart shows this producer’s potential outcomes with the new strategy in place. 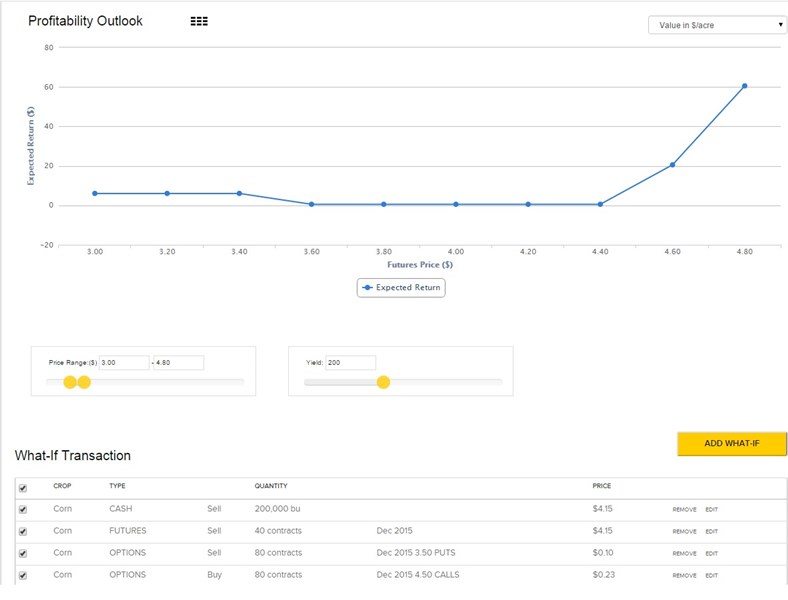 We all know how this marketing year has gone so far, corn broke down to $3.625 by June 15th only to rally to 4.54 ¼ on July 14th.  Corn is back down to the mid $3.70’s as of the first trading day in August.  Most businesses do not have to deal with this kind of price instability for their products!  During this volatility, the example producer’s income fluctuated but at a much slower pace than the market.  He had the confidence that he was going to be alright while the market was at the lows and still had his upside open to improve his floor on a rally.  After the June 30th report, the producer decided to raise that minimum floor from the current level which was breakeven.  He was comfortable at that point in the year because his corn was fully planted and he knew that his insurance would protect him in the event of a large yield loss. The target return of 7% was not possible yet but he had long option premium to manage.  He sold half of his calls on the close of July 2nd.  He also bought all of his short puts back since they were down to only a few cents.  This allowed him to raise his minimum floor to $17 per acre, keep upside on 50% of production, and leave room to get that “double revenue” from the combined sales and indemnity payment in case the market fell below $3.50 by harvest.  The chart below shows his latest profitability chart after the changes on July 2nd: 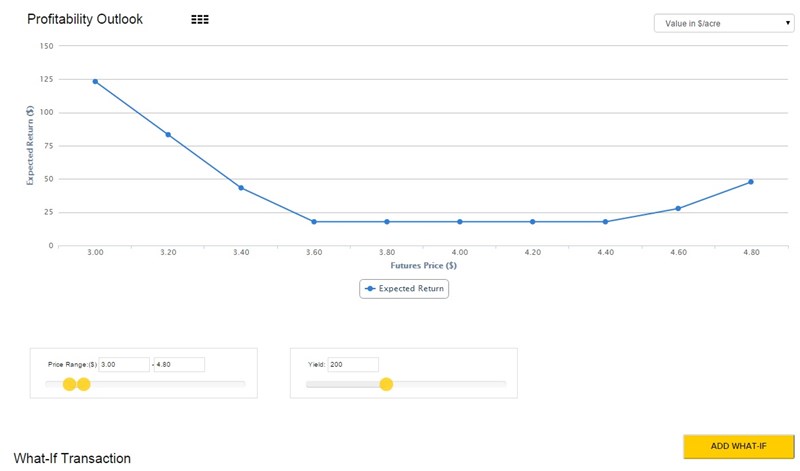 A month has gone by and the market is down significantly from the July 15th high.  At this point in the year the producer still has many options to improve profitability.  He could sell those $3.50 puts again for 10 cents and raise the floor by another $18 an acre, bringing him closer to that 7% target.  Or he could let the market fluctuate.  If CBOT corn were to fall to $3.32, the producer would still be able to reach that 7% return and lock it in by exiting the shorts using long futures.

This marketing year has been a testament that anything can happen. Most businesses do not have the price swings that farmers are currently facing, which means we have to think creatively.  Hedging was very difficult with all of the analysis of crop size and fund positions throughout the summer, but knowledge of your positions allows us to cut through a lot of the noise and emotions, and focus on what really matters – securing farm income.  This producer obviously made some decent moves throughout the year based on the market performance, however even if that rally never came in July he would have been above breakeven at today’s price with the original strategy implemented on March 2nd.

For more information about these types of strategies and farm marketing, please contact us at 855-266-6241.